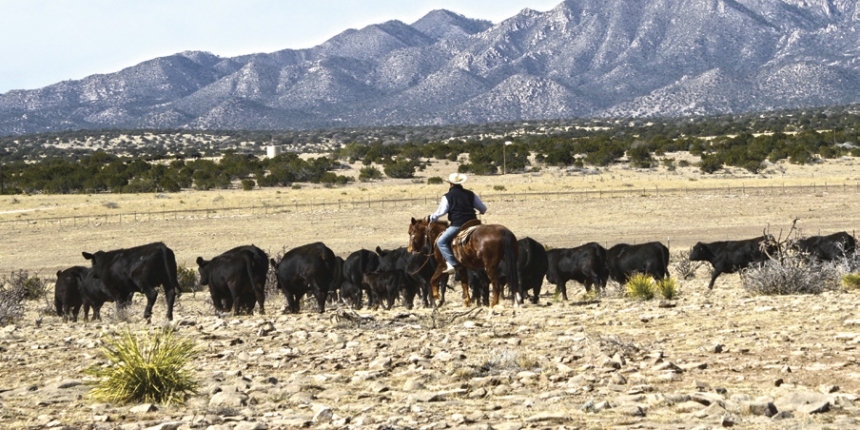 In the Brangus world, everyone knows the Brinks Brangus and Camp Cooley names. Although that herd was dispersed in 2010, the Brinks Brangus cattle, name and tradition of performance-based cattle live on at Westall Ranches near Arabela, New Mexico.

Ray and Karen Westall bought the ranch in October of 2009. Located in the central part of the state, it’s rough, rocky, high desert country, which is why they went with the Brangus breed, said ranch manager Tate Pruett. “This can be the best grass country in the world, and it can be the worst. Since we have had an extended drought, things are pretty tough right now. Brangus cattle are able to adapt to this tough country.”

Pruett came on board as manager in December of 2009, and they bought their first Brangus cattle at the Roswell Brangus Sale in February of 2010. A few months later, they went to Willcox, Arizona, to look at some heifers and pairs that R.L. and Sally Robbs had for sale. “We didn’t know what to expect, and when we drove up we looked over the fence and saw some of the prettiest Brangus heifers you’ve ever seen,” Tate noted. They bought those cattle, and later that summer bought some more from the Robbs, who were suffering from the long-term drought.

“We kept asking who raised the best Brangus cattle, and everyone said Brinks Brangus,” he noted. That November, Ray and Tate attended Camp Cooley’s final dispersal sale – The Final Page – and bought a truckload of heifers.

They were so impressed with the Brinks operation and the results from those heifers, including Brinks Arabela 1038, a bull they raised out of one of those heifers, that when the Brinks Brangus name and the LB Brand came up for sale the next year, Ray bought them from the owner, Klaus Birkel, and registered them in New Mexico.

“We spent the next two years putting together as much of the old Brinks herd as possible, today the herd is about 70 percent Brinks cattle. We have tried to buy as many original Brinks branded cattle we could. It has been easy to learn that the Brinks bred cattle represented a very specific kind of Brangus…. cattle with added muscle and marbling. One of our large groups of original Brinks cows came from Three Trees Ranch in Georgia. This group of cows were really high marbling cattle and will be a piece of the genetic puzzle going forward.”

Tate explained. “We have continued to breed our cattle for quality, and have spent the past three years building our program. We’ve gone from turning bulls out just to get calves on the ground to an extensive AI and embryo transfer program, transferring several hundred embryos a year,” he continued. Their marketing director, Cheramie Viator, came to the ranch after working eight years with the Brinks herd at Camp Cooley. “The Brinks program was based on performance, producing bulls that worked for both commercial and registered producers. Here, we are very focused on rebuilding that premise of a performance-based herd. “We are building our numbers while improving the herd, focusing on easy fleshing, good footed, good muscled cows.” Viator, who covered the western United States for Camp Cooley, says that the adaptability of the breed is impressive.

In the process of rebuilding the Brinks herd, they have brought cows to Arabela from all over the country, and they’re doing well. The ranch markets their registered Brangus cattle to both seedstock and commercial producers. In 2014, they will once again join with 101 Ranch and several other Brangus breeders to sell cattle in the World Series of Brangus Sale. The sale will be held in November at the 101 Ranch headquarters in Palo Pinto, Texas. “We want to raise the best bulls we can, for either the commercial or seedstock producer,” Tate noted. “We want to help the commercial cowman get the best value for his money. If he can get more pounds on the ground come shipping time, it’s easier for him to earn a living. Because of our rough, rocky terrain, our bulls are conditioned to handle about any breeding conditions you can throw at them. You won’t find fat, pampered bulls in our program, instead you will find bulls that are easy fleshing, hard footed, sound and ready to work. ” As part of their continued effort to improve the operation, Tate said, they are in the process of building a 250 head feedyard at the ranch where they will be able to develop bulls, track feed efficiency, scan carcass data, and incorporate that information into their breeding program. “We want to produce bulls that will perform and get results for our customers, but won’t cost an arm and a leg to feed.” He noted that after yearling carcass ultrasound bulls are turned out into large pastures to continue their development. According to Tate, “Our females will be developed with longevity in mind. The females that can survive the challenges of living at 7000 feet, drought and long distance traveled to water will certainly be the future foundation of our herd. These will become the donor cows we use in the future.” “We are excited about several of our herdsires and look forward to their positive contributions,” says Viator.

“Brinks Billy the Kid 468Z1 was the high seller at last year’s World Series of Brangus Sale. He is the kind of bull that we believe will really contribute to a positive phenotype in our herd and our partner’s herds.” Another progressive senior herdsire is Brinks Arabela 1038. His first daughter was one of the high selling open heifers this spring when she sold to Lake Majestik Farms in Alabama. She also commented, “Both of these bulls are exceptionally sound and good footed. Basically, the kind of bulls that keep cattlemen in business for the long term.” Keeping with the Brinks tradition of producing Brangus cattle with added carcass value, Brinks Coyote 14Z and Ruger of Brinks 14A are the next generation of herdsires that are seeing heavy use in the herd.

The Westall Ranch, along with Lack Morrison Brangus in Clovis and others, is also part of a program that helps give FFA students in San Simon, Arizona, the opportunity to learn about livestock and agriculture by raising and showing cattle. Tate says that this program gives these students a new experience and valuable knowledge. “Youth today don’t know how to go outside, and part of that is that their parents just can’t afford to let them do a lot of things.”

Each year, the ranch provides four heifers for the program, along with feed and funding for show and travel. Participating students come to Arabela to select their heifers, then care for and show them all year, finishing up at the Arizona National. At the end of the year, the heifers come back to the Westall herd. “I would like to see something like this get started in communities in New Mexico, and I think that there are other ranchers out there who would be willing to participate,” he explained. “I read the other day that the average age of a farmer in the United States is 62 years old. If we don’t teach kids how to get food on the table, how are they going to provide? How are they going to feed America?”

The generosity of ranch owners Ray and Karen Westall has made a big difference to a lot of people, according to Tate. “Ranching is something I always wanted to do but never thought I would be able to. Ray and Karen have given me that opportunity.” “There aren’t people like Ray made every day,” he continued. “He will help a kid, help a family, he has helped me. He loves kids, and loves cattle, and likes to put the two together and put smiles on faces.”

Viator added, “Ray’s commitment to the Brangus breed is exceptional and his commitment to helping young people is even greater. Brinks Brangus at Westall Ranches will sponsor and support several new programs for junior exhibitors in the Fall of 2014. Stay tuned for details!”

As we move into the spring calving season for...

Red Brangus: The Breed That Offers the Most for America’s Cattle Producers

Red Brangus: The Breed That Offers the Most...