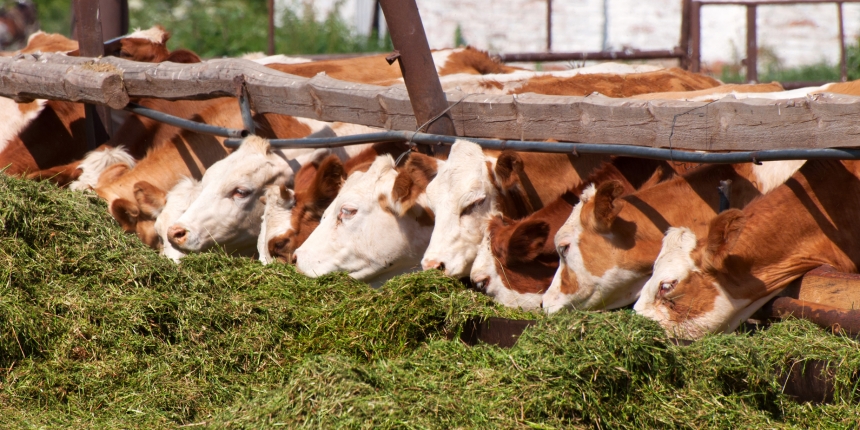 Small grains represent a potential forage resource for wintering beef cattle. While these crops are most commonly harvested as grain, advantages exist for using the crop as forage. The most obvious advantage of harvesting small grains as forage is increased total nutrients harvested per land area.

Grain weight of most cereal grain crops represents only 45 to 55 percent of the total plant weight. Therefore, harvesting the total plant as a forage crop will substantially increase the amount of energy used by the beef animal. Also, early harvest as forage will minimize the risk of loss due to wind, rain, or hail. Finally, forage harvest of small grains offers a viable means of salvaging the crop that has suffered severe drought or insect damage.
Because of extensive leaf loss and kernel shattering that occurs during dry hay harvest, small grain forages probably should be harvested and stored as ensilage. Ensiling small grain forage also serves to soften the rough seed head awns that may otherwise cause soreness to the mouth of cattle. Disadvantages of this handling system relate primarily to the additional cost and management of silages. The beef producer must understand the processes involved in fermented feeds to produce the best possible small grain silage. 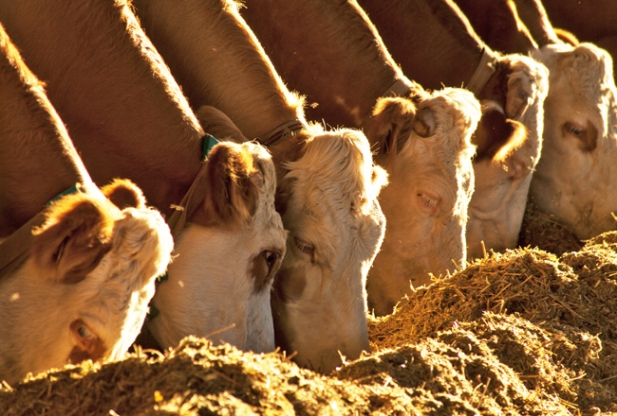 Fermentation Process
Proper fermentation of forage crops for silage depends largely on the formation of a proper environment for anaerobic bacteria (live in the absence of oxygen) to ferment the forage. Characteristically, this proper environment has had all of the air excluded and has an abundance of easily fermentable carbohydrates (sugars and starch) for the bacteria to use. With proper management, small grain forages can provide this storage environment and can produce top quality ensiled feed.
Described below are the various stages of fermentation that occur during the silage-making process.

Respiratory Phase
The fermentation process begins as soon as the storage structure (silo, bunker, or plastic bag) is filled. The first phase of the process is the respiration phase. During this phase, aerobic bacteria consume soluble sugars from the forage, along with the small amount of oxygen present after packing, and produce carbon dioxide and water. Heat is produced as carbohydrates break down. While this respiratory phase is necessary to eliminate all oxygen from the storage structure, extended respiration is undesirable. One reason is that soluble carbohydrates, which are good energy sources for livestock, are converted to carbon dioxide and water, which have no energy value. Another reason is that excessive heat generated during a long respiratory phase will damage nutrients, especially protein, contained in the forage. Good management is required to minimize the exposure of stored forage to air, thereby reducing the respiratory phase.

Lactic Acid Phase
As the pH of the forage begins to fall, another type of anaerobic bacteria begins to grow and multiply. This type of bacteria, which can tolerate lower pH conditions, produces lactic acid, hence the lactic acid phase of fermentation begins. The lactic acid-producing bacteria continue to produce more acids until the pH reaches approximately 4. At this point the acidity of forage is too great to allow growth of any type of microorganism, mold, or bacteria. Therefore, the forage is said to be preserved and the fermentation process is complete. As long as the produced silage is not re-exposed to air, no spoilage will occur. Importantly, the acetic and lactic acids produced during the final stages of fermentation are palatable and can be used as energy by cattle. Conversely, butyric acid, which may be produced instead of lactic acid during fermentation of forages having greater than 70 percent water, has an offensive odor and will decrease the palatability of the silage.

Management of Small Grain Silage
Management practices for making good quality small grain silage and for producing lactic acid efficiently are largely associated with three factors: (1) selecting species and cultivars that are well suited to the particular growing area, (2) controlling forage maturity and forage conditions at time of storage, and (3) minimizing the amount of air initially present in the stored forage.

Small Grain Species and Cultivars
Research comparing the various small grain species (oats, barley, wheat, and rye) and cultivars within these species has led to inconsistent results. Generally greater differences in forage quality and yield per acre may exist between cultivars within species than between the major species themselves. Performance of small grain cultivars largely dependents on factors such as climate, plant vigor, and soil fertility. So cultivars of choice will vary from region to region. Perhaps most important are the differences in time of maturity for different small grains. Cultivars of rye are usually the earliest to mature, reaching proper maturity for harvest in May or early June. Wheat and barley are next in date of maturity. Oat cultivars are last to mature, being ready for silage in early July. In some regions, the growing season is long enough to allow a crop of rye silage to be harvested in May followed by a short season summer crop. Alternatively, later maturing cereals, such as most oat cultivars, can be used to postpone harvest to July when weather conditions may allow for better harvest.
Interseeding other annual crops with the small grains may increase the amount of silage harvested per acre. Annual legumes such as peas complement the forage attributes of the small grain crop. Annual legumes will increase both the tonnage per acre and crude protein content of the harvested forage mixture. Recent experiments at the University of Idaho suggest that early and intermediate maturing varieties of peas are most effective in increasing dry matter production per acre. Optimal mixtures of grain and pea seeds are not determined, but a mixture containing 45 percent peas by weight provided the best results in these experiments.

Stage of Maturity
An important decision for the producer at harvest time is when to harvest small grain crops for silage. As the plant matures, forage quantity will obviously increase. However, forage quality will decrease. Most studies indicate that dry matter digestibility decreases as the small grain crop matures. The decline in digestibility may level off in the late milk stage of kernel development, a time when the highly digestible grain fraction makes up a greater proportion of plant weight. Similarly, yield per acre is usually at a peak at the late milk stage of maturity. For these reasons, harvesting at the late milk to soft dough stage of kernel development represents a good compromise between quantity and quality of the small grain forage crop. At this stage of maturity, the plant is beginning to replace the milky, sugar-containing fluid in the kernel with starch, giving the material contained within the kernel a dough-like consistency. Small grain forage at this stage of kernel development offers abundant soluble carbohydrates for rapid ensiling and will produce high energy, top quality silage.

Moisture Content
As with other silage crops, optimal small grain silage is made at a moisture content of between 60 and 65 percent. This moisture content allows for good packing to exclude air and also promotes desirable types of anaerobic bacteria. Small grain crops harvested at the late milk stage of maturity will require minimal field wilting to achieve this moisture content. Forage stored at greater than 70 percent moisture will likely incur seepage losses, especially if stored in an upright silo. Higher moisture content may also cause undesirable production of butyric acid. Small grain forage dried to less than 50 percent moisture may have air pockets and not pack as tightly. Water should be added to these forages at the time of storage to ensure tight packing. 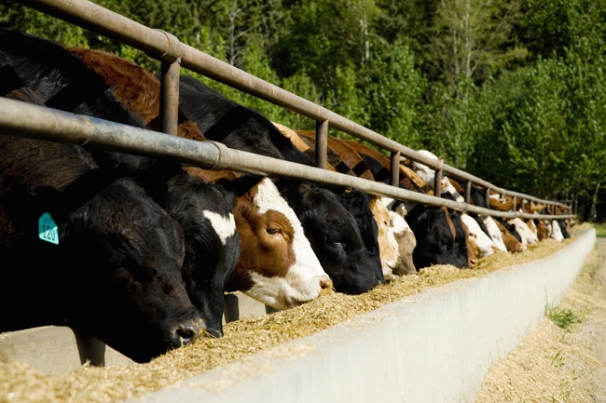 Anaerobic Conditions
Numerous management practices will minimize the exposure of forage to air both during and after ensiling. To begin, the small grain forage needs to be chopped to a length short enough to allow firm packing in the storage structure. A 1/4 to 3/8 inch theoretical chop length is commonly recommended for good forage compaction. Shorter chop lengths will pack tighter but are known to cause digestive upset to lactating dairy cows fed silage in combination with large amounts of grain. This is not likely a concern for the beef cow fed primarily on forage. A finer forage particle length is most important for suitable packing of drier and more mature forages.
An often overlooked factor important for anaerobic conditions is the rate in which the storage structure is filled. Slow filling of the structure increases the amount of surface area that is left exposed to air and will extend the length of the respiratory phase. Similarly, slow feedout of the silage permits extensive aerobic destruction of the ensiled forage. Producers should be careful to avoid interrupting more than the necessary amount of the face of the structure during daily feeding. For these reasons, silage feeding of small numbers of cattle is generally not recommended. Losses caused by respiration during and after the fermentation process cannot be visibly observed, although heat production is a good indication of excessive respiration.
Packing is another critical factor for good anaerobic conditions for silage. Forage stored in upright silos usually becomes well packed by the weight of forage added to the top of the silo. Forages stored in bunker silos must be diligently packed with heavy farm machinery. Rubber-wheeled tractors provide a firmer pack, as they have more weight per surface area than crawler tractors. After the last forage to be stored in a bunker is packed, the top surface should be covered with plastic. Discarded tires are commonly used to anchor the plastic to the forage surface to exclude air trapped between the plastic and packed forage. Proper packing followed by a sheet of plastic weighted with tires will reduce top surface spoilage to 1 to 3 inches.

Bacterial Inoculants
Bacterial inoculants have probably become the most commonly used silage additives. These additives are live cultures of bacterial species that convert soluble carbohydrates to lactic acid. Therefore, bacterial inoculants from reputable commercial sources are known to cause a more rapid production of lactic acid associated with a faster drop in pH during the lactic acid phase of fermentation. These effects shorten the time for the ensiling process, thereby minimizing storage losses. Also, some inoculant companies have claimed an increase in the fiber digestibility of silages treated with lactic acid-producing bacteria. Several reports also indicated inoculated silages have improved resistance to aerobic respiration at feeding time.

Enzymes
Many enzyme products are commercially available. Enzymatic additives assist fermentation by partially digesting the complex carbohydrates, both starches and fiber, to provide readily available sugars for the lactic acid-producing bacteria. Another possible benefit is that pre-digesting the fiber component of the forage may allow more thorough digestion in the animal.

Organic Acids
Organic acids, usually propionic or formic acid, have been used as silage additives for many years. Acids function to reduce respiration and in general inhibit mold growth during both storage and feed-out. Also, during silage fermentation, anaerobic bacteria begin to degrade some of the forage protein, making the protein of less value to cattle. Organic acids will reduce the amount of protein degradation occurring during fermentation. Formaldehyde is sometimes used in combination with formic acid as an additional protection of protein during the ensiling process.