Gopher General Takes the Mounds out of the Alfalfa 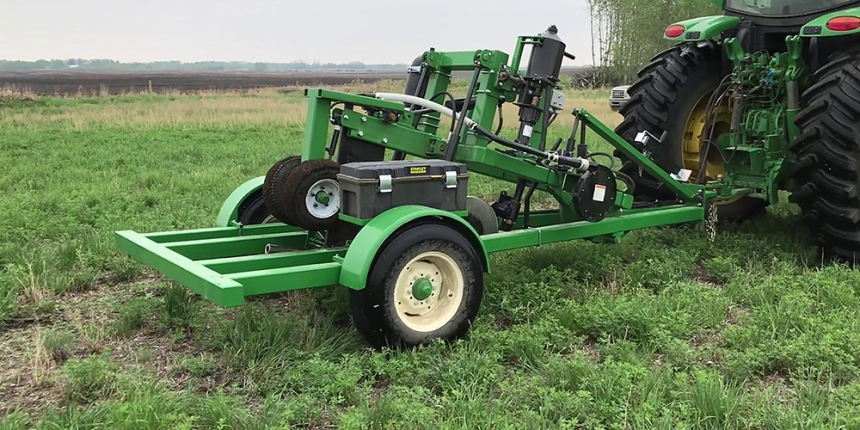 Gopher General Takes the Mounds out of the Alfalfa

Farmers and ranchers, who plant alfalfa and pasture forage seem to constantly be battling the pocket gopher, a burrowing rodent that can cause incredible damage to both dryland and irrigated crops. In addition, damage to equipment also occurs during hay harvest as the equipment cuts into the mounds. At the same time, a lot of hay is exported from the U. S. to other countries. If dirt from the pocket gopher mounds gets into the hay, these countries can refuse those shipments. Controlling these rodents is easier said than done and can be both expensive and time consuming. Many management techniques ranging from trapping, to fumigating, to flooding, to poison have been tried with various degrees of success.

However, over the past 10 years, a new product has come on the market that is successfully revolutionizing the way to control and perhaps even eliminate these burrowing rodents. Called the Gopher General (www.gophergeneral.com), it is a patented pull behind machine with a 20-inch diameter disk followed by a shank and torpedo that create a tunnel into which slow release fumigant tablets are safely placed and then sealed in the soil with two pneumatic packer wheels angled together. The sealed gas remains for several days and is lethal on the rodents. Murray Pask, inventor and designer of the Gopher General, says, “The Gopher General was born of necessity. Over 2,000 acres of our family farm (near Atwater, Saskatchewan) is planted to alfalfa, and we needed something that provided good gopher control, was cost effective, using minimum labor.  Nothing we tried met our needs. The end result is the Gopher General.

A little history
Pask grew up on the family farm but left to earn two degrees in Mechanical Engineering. However, by 1971, he was headed back to the farm. “I was born to be a farmer and raise my family on the land.” The Pask family takes great pride in the farm. “It is the core of what makes all of this possible. Some of the land we farm has been in our family over 100 years. The fields are rotated through other crops, but the focus is always on bringing each field back into alfalfa seed production.” As a result, there has been an ongoing battle with pocket gophers: they are drawn to the nutrient value of the alfalfa plant’s root system.
Pask battled them the traditional way: trapping, fumigating, baiting and even designing pull behind machinery. “We started starting to use a 3-point burrow building machine to meter the slow release fumigant tablets. It worked so poorly we almost gave up. However, we knew that the slow release tablets worked. So, we kept trying to design better machines.”
Finally, in 2010, Pask built the first prototype that really worked and became the first Gopher General. “A friend of mine still has it. In 2012, we made more improvements and built six. These machines are in Saskatchewan, Washington and Nebraska. This year we built 10 Gopher Generals with the goal of strategically introducing them across the United States. From our experience, we think they will work anywhere there are pocket gophers.” 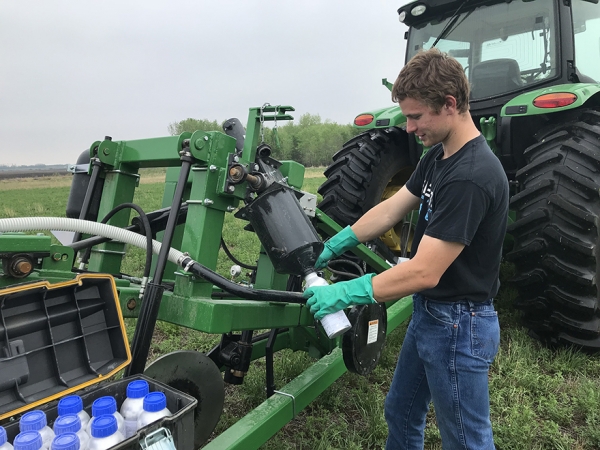 A look at the data
Being analytical, Pask crunches the numbers. What are the results? What constitutes success? “Each spring and fall we drive the fields looking for new mounds. When new mounds appear, the Gopher General is dropped into the ground. It makes the tunnel, places fumigant tablets in the tunnel and seals up the cut in the soil.” A follow-up trip to the field a week later will show the results. “For us, success is when there are no new mounds 95 percent of the time. I take a look at labor cost, machinery cost and fumigant tablet cost. When we first started, we were using $10 of tablets per acre. Now our annual cost is between $1 to $2. When we add in the cost of the man and tractor, our total cost is well below $10 per acre to control gophers all year. Initially, I figured it cost us $25 per acre, then it dropped to $10 per acre by 2013 and now it’s down to $6 per acre.” That’s a pretty efficient use of time, machinery and cost of tablets.

How the Gopher General works
First off, no huge tractor is needed. Simply a 50 hp drawbar tractor with an alternator putting out 35 amps and one hydraulic circuit is needed. All three systems work with a hydraulic accumulator system.
To protect against rocks and foreign objects, Gopher General is designed so that the disk will ride up as much as 14” to ride over rocks and then re-enter the ground automatically. The shank and torpedo will pivot up and back to clear itself, while the packer wheels move independent to the shank and move up and down. For safety, the fumigant tablets are poured into an enclosed hopper at the start of treating a field so that exposure to the fumigant is limited to the start and end of the process.
Secondly, a sealed tunnel keeps the fumigant in the ground. A disk enters the ground first, cutting a deep slit through plant roots in the soil. This is followed by a shank that cuts clean making an artificial tunnel about 12” below the surface. The fumigant tablets are metered from the hopper into a venturi air stream and an electric fan provides the air blast which transports the tablets down the back of the shank and out the rear of the torpedo. For safety, fumigant tablets only meter when the torpedo is at full working depth.
The silt in the ground is sealed by the two pneumatic packer wheels. Since the fumigant gas released is heavier than air, it remains below ground. It is not detected by the gophers and remains effective for several days.
To watch the Gopher General in action, check out the video on the website: www.gophergeneral.com.

It works
It’s pretty obvious that Murray Pask believes in the Gopher General, but so do other producers. Here is what one of his farmer customers, who has had one since 2016, from the state of Washington has to say: “Best gopher control I’ve ever seen. Our cost per acre has gone down after the first season of use. Just added a second machine to cover all our ground.” (M. B. - Walla Walla, Washington)
A second customer says, “Over the years we have tried various methods for controlling pocket gophers on our alfalfa fields including trapping, blasting the tunnels with a propane/oxygen mix and forcing anhydrous ammonia into the runs. None of these techniques have been as effective or as easy to use as this machine. I would definitely recommend it.” (G. W. - Pilger, Saskatchewan)