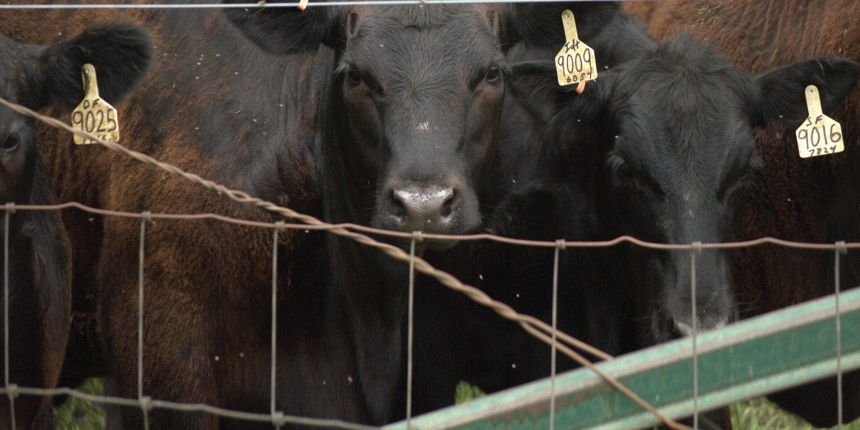 Horn flies are the most common summer pests for cattle, but there are ways to reduce these costly external parasites besides toxic chemicals.  After the advent of pesticides, it became common practice to use sprays, pour-on products, back rubbers, insecticide ear tags, feed-through larvicides, etc. but in recent decades horn flies have developed resistance to most of our chemical weapons.  People have also become more concerned about the environment and overuse of chemicals.  Pesticides can be harmful to beneficial insects as well as the ones we are trying to control.

Dayton Steelman, Emeritus Professor of Veterinary Entomology, University of Arkansas-Fayetteville, Arkansas, thinks the use of insecticides lost a lot of benefit when fly tags were developed.  “I went to graduate school with the guy who came up with the concept of including insecticide with plastic components to make insecticide-treated plastic ribbons for hogs to control hog lice.  Then several companies developed ear tags that became popular for cattle in the late 1970’s,” said Steelman.

One of the reasons flies have developed resistance to insecticides in those ear tags is that cattle producers often leave the tags on cattle instead of taking them out at the end of horn fly season.  After potency starts to wane, the tags no longer kill all the flies; the ones that survive start the selection for resistant flies, because they are the ones that are left to reproduce.

“It got to the point where the ear tags being marketed were changing every year; producers only had a one or two-year period of effectiveness for any particular tag.  They had to keep changing tags and were losing ground with the flies,” said Steelman.

He taught at Louisiana State University for 18 years before he went to the University of Arkansas.  “LSU had a breeding program using Brahman cattle, and had almost every possible cross with Brahman and English cattle--everything from 100% Brahman to 25% or less.  I recognized the value of Brahman for insect resistance,” he said.

“When I moved to the University of Arkansas in 1983, I worked with a famous breeder, Dr. C.J. Brown in the Animal Science Department.  He felt cattle ought to be able to perform with very little input from humans.  The University had a herd of 400 Angus.  Working through a Southern Regional Research Project, Dr. Brown’s idea was to develop cows adapted to their environment’s forage capability.  The Arkansas Ozarks grows mostly tall fescue on shallow topsoil. Grass doesn’t grow as lush as in some other parts of the country,” said Steelman.

“Dr. Brown was breeding cattle that could thrive on that grass.  He had a herd of Angus that were the breed type of the 1950’s.  They measured less than 44 inches in height at the hip.  He divided these cattle into groups, keeping some of them the same, and selecting others for larger size.  He eventually had groups that were still small, some that were medium height (about 46 inches at the hip) and some larger-framed cattle that measured 47 to 50 inches at the hip.  The ‘modern’ Angus by that time were 50 inches tall at the hip.  I worked with Dr. Brown on these projects.”

Steelman collected horn fly data on more than 400 Angus cows at the University of Arkansas and at the USDA Center at Booneville on a weekly basis for 14 to 16 weeks during summers, for four years.  The cattle received no insecticide treatments.

“We used this data to calculate heritability and repeatability.  There was a statistically significant difference in horn fly numbers among the four groups and the ‘modern’ group at Booneville.  The data showed that as cattle were selected for larger frame size, they had significantly greater numbers of horn flies,” he said.

“Dr. C.J. Brown retired and was replaced by Dr. Hayden Brown, who continued our horn fly studies.  He had 100 Charolais, as well as 18 Chianina cows that were donated to the University.  They were interesting to compare, in the fly studies.”

Chianiana cattle are white with black skin.  Charolais are white with cream-colored skin.  “The old belief was that greater numbers of flies went to darker cattle.  If you compared the number of flies on Chianina cattle with flies on the darker cattle, the numbers were always lower on the Chianina, but there were also individual differences within breeds.  We had Red Poll, polled, and horned Herefords, to compare with the Angus.  There was a statistically significant difference among breeds, as well as among individuals within each breed.  We analyzed the data and came up with 58% heritability estimate for horn fly resistance,” Steelman said.

An animal scientist at Lethbridge, Alberta had a large herd of Angus and conducted a study looking at differences in the number of hairs per square inch on more than 400 Angus, and reported significant differences among the cattle, depending on size.  “When I reviewed his work I realized the significance of breeding for larger frame size.  When you take small-framed Angus and breed them up until you get a larger size, you still have the same number of hairs.  According to his data they have the same number of hairs at birth and you’ve just spread them farther apart on the bigger animal,” explains Steelman.

“So I ran a study and found that purebred Brahman cattle had the highest number of hairs per square inch, of all breeds.  The Chianina were right up there, too, and in other breeds the hair number per square inch was less and less as the animals were selected for larger frame size.  I washed those animals and determined that whatever was being secreted by the two oil (sebaceous) glands and one sweat gland associated with each hair had an effect on fly attraction or repellency, and the more hairs the animal had, the more glands in the skin to secrete these various chemicals.  This is where we got the individual differences,” he said.

“I was lucky to be working with people trained in molecular biology.  I was from the old school of classical breeding where it took about 30 years of breeding/selection to change genetic composition in a herd.  These younger folks helped me conduct research to identify genes that were heritable.  I developed bulls created via embryo transplant, using semen obtained from a four-year-old Simmental bull at the USDA Clay Center in Nebraska.  He was predominantly red with a little white, and I selected him after making repeated fly counts.  He was in a pasture that contained 100 four-year-old bulls of various breeds, and he had the lowest fly counts of any bulls we’d ever observed.  He consistently had 50 or less flies, while other bulls in the same pasture had 550 to 1000 flies on average, during the entire study.  The USDA lab let me have several straws of semen from that low-fly bull,” said Steelman.

“We put that semen into a Red Poll cow that had the lowest fly numbers over the four years of our study.  We collected her embryos and put them into surrogate mothers.  From those I developed two full-sibling bulls that we used in further studies.  We also collected semen from Angus, Hereford, Chianina and Charolais bulls, and with AI developed a small group of cows of different breeds that had all been developed through embryo transfer from horn fly-resistant cows—identified within each of their respective breeds.  We compared these horn fly-resistant cows to herds of Herefords, Angus, crossbred Angus-Brahman and Hereford-Brahman cattle.  We discovered that we could influence fly counts by using Brahman or Chianina breeding but were producing a big animal that in most cases is too big for the environment,” he said.

Today cattle breeding/selection focuses on many things, but the heritability of fly resistance is often overlooked.  “As you look at your herd, make note of which cattle have the most flies.  If a high-producing cow has a really good calf every year, there’s no point in selling her, but you can help her by treating her individually.  Instead of treating the whole herd for flies, just treat those that you know have high fly numbers every year.  The flies attracted to those cows will get killed,” he said.

All the animal breeders he worked with said that horn fly resistance is a heritable trait in the bull that is expressed in his female offspring.  “If you are keeping replacement heifers, keep them from a bull that has as much fly resistance as you can get.  If you are keeping bulls, select from dams that don’t have many flies.  People are making selections on many other traits instead of fly resistance, but in this day and age of trying to reduce inputs as much as possible, this trait becomes important.  If you have a cow that’s a high fly cow and she isn’t producing top calves, cull her and keep a young one with more fly resistance.  As you continue selecting, you can turn the herd toward more fly resistance,” he explains.  Fly resistance depends on several things, including breed, size of animals, and individual differences.  Research continues to identify the specific gene(s) involved with horn fly resistance in cattle.

Cattle Selection For Fly Resistance
Some breeds are more resistant to flies than others, and individual cattle within breeds have differences.  A few people are selecting breeding stock for horn fly resistance, among other traits.  “In any herd, often the most productive and efficient cows tend to have resistance to parasites, flies, etc.” according to Roger Moon, PhD, Emeritus Professor of Entomology, University of Minnesota (St. Paul).

“I taught veterinary entomology to veterinarians, and undergrads in veterinary science, and when I talked about aquatic biting flies (tabanids—horse flies and deer flies), mosquitoes, etc. I told them there is no way to control those on cattle.  About all you can do is select for hardy stock,” says Moon.  You can genetically select for horn fly resistance, however.

A few cattle breeders have added horn fly resistance to their criteria for seedstock selection.  One of the first to do this was Kit Pharo (Pharo Cattle Company, Cheyenne Wells, Colorado).  He has been working on genetic resistance to parasites for a long time, and has selecting horn fly resistant cattle for 20 years.  Pharo now offers “low fly” bulls that pass this genetic resistance to their offspring.  He has been evaluating and scoring cattle from his breeding program for this trait, for more than 10 years.

Pharo says that evaluating and scoring fly resistance is not as difficult as some people think.   “We simply assess how many flies each animal has.   There is often a big difference between animals in the same herd.   While a few animals are covered with flies, others will have very few.   In the cool morning hours, flies will be on the animal’s back and easier to count.”   As the day warms up, the flies move to the shaded areas of the belly and legs.