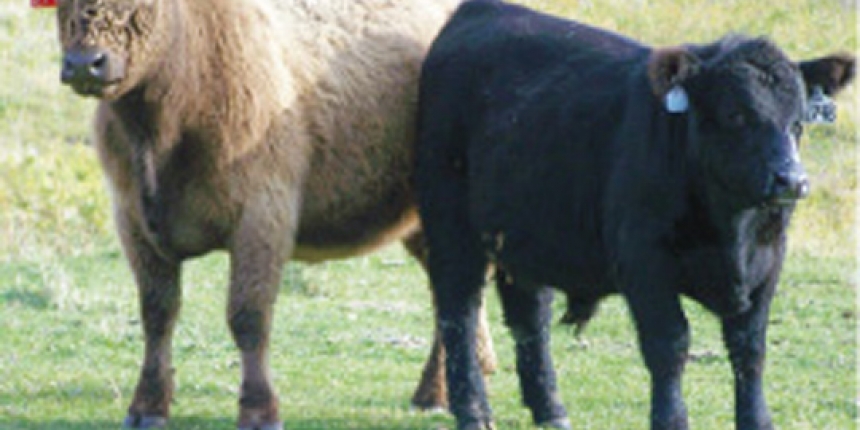 The Galloway breed of cattle with a genetic background that goes back to the coastal lowlands of Scotland has been a choice for cattle owners in the United States since they were first brought to this country in the mid-1800s. “They were tougher than nails,” says Debra Vance public relations director for the American Galloway Breeders Association (ABGA). “Plus, they display great versatility with superior beef production, feeding efficiency and ease of calving.”

These qualities are making the Galloway breed a much-desired breed of cattle today. Harley Blegen, who hales from North Dakota and has been President of AGBA four different times over the past 20 years, believes a huge positive for the Galloway breed is that they have been purebred since the late 1500s. “Over all of that time, the Galloway herd book has never been opened up. It’s always remained closed.” Galloways come in three primary colors: black, red and dun. Thus, the integrity of the breed has been retained.
With the changing economy and production costs increasing, along with consumers that are looking for USDA choice beef, the Galloway breed is becoming more and more popular. The Blegen (blegengalloways.com) family has raised registered Galloway for over 25 years. “We pride ourselves on producing efficient cattle. Our philosophy is to produce and maintain a herd that performs for today’s needs in the beef industry.” First, the production cost. Bobby Wellner of Powell, WY is in bull production sales and has been raising club calves since 1979. He finds that their forage ability is second to none. “I like to say that they are the last to the manger for food and the first to leave.” With the rising cost of corn and commercial supplements, having a breed that is able to gain weight efficiently on predominately pasture and post-harvest stubble helps cut costs. This characteristic will provide huge savings to the producer.
Blegen notes that the grass finishing industry and the commercial industry are looking toward the Galloway breed. “They are looking at feed efficiency of their herds. With no supplements or commercial feeding, the Galloway beef will grade USDA choice on grass. When the heavier breeds are butchered, has to trim away excess back fat, while the Galloway will grade USDA Choice with less than ½ inch of back fat. This characteristic enables the Galloway to produce beef lower in cholesterol; yet it maintains the tenderness, flavor and juiciness desired by today’s consumers.”
Part of the reason for this efficiency stems from the long hair coat that the Galloway possesses. Blegen says, “The breed developed a double hair coat, a heavy dense undercoat and a longer outer coat. This protects them from the elements and is the reason they don’t require all of the commercial feed, supplements, or other high energy feedstuffs that other breeds do.” North Dakota’s 2009-10 winter reinforces this fact. “With two feet of snow and temperatures 20-30 below zero, the Galloways were still out foraging on their own.” Most amazing, they continued to consistently gain weight. Galloways dress out at slightly over 60 percent live weight. Data shows that with just one inch of hair, feed costs can be cut up to 25 percent.
Wellner echoes those sentiments. “The Galloway has a good solid genetic basis. They give some of the old reliable and predictable genetics that I think have been lost in some of the other breeds.”
At one time, there seemed to be a race to the top so to speak in the cattle industry as producers bred for increased size. During that time, Galloway producers kept to the original genetic principal of a moderate mature size. Now Wellner sees the beef industry changing again, moving back toward the frame size that the Galloway has always been.  A huge positive attribute of the Galloway breed is its resistance to altitude sickness disease known as Brisket Disease. In mountainous areas, some cattle at higher elevations can suffer pulmonary arterial hypertension that can lead to congestive heart condition. This often happens when cattle are taken to higher elevations (up to 10,000 ft.) for summer pasture. For instance, at 5,000 feet, the air is 17 percent less than it is at sea level. This shortage continues to heighten as the elevation is increased. If cattle have been raised at higher elevations, the losses are not as great as imported cattle where losses can range from 30-40 percent. Cattle less than a year old are especially susceptible. Vance says, “The Galloway are highly resistant if not immune from the disease.” There are numerous newspaper articles from the 1960s that tell of the effectiveness of using Galloway bulls in commercial herds to eradicate Brisket Disease. The question I have is how did we forget what we knew then?” Vance had the majority of her herd PAP Tested by Dr. Holt from CSU. None of the scores were above 43. Dr. Holt explained that many bulls here on the front range already score over 100 and cannot be moved to altitude and must not be used for breeding (bulls) as they will pass on the problem to their progeny. Wellner adds, “I have a customer whose herd is at a high elevation. He used AI with one of my bulls, EYECANDY, who is listed as one of the top bulls in the club calf business. He recently reported that he had no problems with brisket disease with any of the new calves.”
So, why the Galloway?
I think the following thoughts from the AGBA website (americangalloway.com) best sums up the reasons.
• We learned way back that it’s not always in our best interest to chase every fad that rushes by.
• We watched the great frame race of the last two decades, and kept our cattle moderate in size and mature weight - even though it was unfashionable to do so.
• Then we witnessed the industry push for maximum lean, and questioned how long consumers would buy beef that’s too tough, that has no flavor.
• And we wondered how long cattle producers could tolerate heavily-muscled open heifers, and bulls that couldn’t get the job done when the going got tough
• That’s why we breed Galloway.
For copies of the articles on Galloways fighting Brisket Disease or a copy of Dr. Holt’s test scores for our herd, please contact Deb Vance: DebVance@theDDRanch.com. For more information on bull production sales and club calves, contact Bobby Wellner at WellnerCattle@hotmail.com, and on the AGBA organization, contact Harley Blegen at blegen_galloways@juno.com.