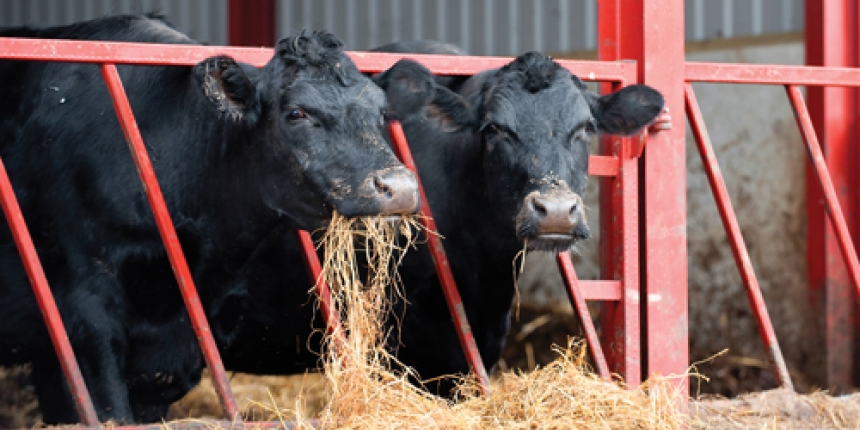 The struggle for sourcing feed continues as cattle producers evaluate current and future feeding options. Even though the culling is deep, there still are cows left to feed, so now is the time to call a good beef cattle nutritionist. The market is redefining “least cost” feedstuffs, so producers must review all the options when purchasing feed. The nutrient value of feed is what drives value and performance. However, knowing when and how to feed also is important.

So, this is a good time to go see the doctor. When I visited with Chip Poland, chair of the Dickinson State University Department of Agriculture and Technical Studies and a well-educated beef cattle nutritionist, the first thing Poland noted was to encourage producers to default back to the basics.

“We feed nutrients, not pounds, which is a tough concept to get across because we physically see pounds,” Chip says. He went on to note, after a few local phone calls, that producers are paying $6.88 to $8 per bushel of corn from other producers. However, local elevators are buying corn in southwestern North Dakota at prices ranging from $7.60 to $8.50 per bushel (late July). What this means is that cattle producers can buy corn at the local elevator, but pay a price markup.

For example, one local elevator was buying corn at $7.20 per bushel, but selling corn at $7.94 per bushel. This particular price quote equates to approximately 18 cents per pound of total digestible nutrients (TDN) for corn being purchased by the producer.

The form that one buys feed in is price-dependent. Using Chip’s example, with both corn and hay priced high, there still are options as to how a producer obtains the energy and other nutrients that a cow needs.

Chip went on to note that “hay was competitive if there are reasonable shipping costs. However, as transportation costs increase, and if one figures waste, that may or may not be true. I can feed corn with minimal waste while storing and feeding round bales of hay, but one should factor into the price approximately 10 percent as waste.”

The form the feed is in greatly impacts the capacity of a producer to control waste.

“Think about the comparison that was presented here, which is to hunt and peck to find hay that is reasonably priced and then haul it to the ranch versus buying corn off the shelf,” Chip says.

Regardless of what feed is being purchased, hauling and transportation costs are critical.

“What would corn cost if we looked at the source and moved it in unit volumes?” Chip says. “The local elevator publishes prices for corn and other grains, but it still needs to be delivered to the ranch. So, regardless of feed source costs, the final decision more than likely will depend on transportation cost per mile times the number of miles hauled. Local sources are always better.

“Therefore, in a very simple scenario, we see that high-priced corn may not be as costly as it would appear. Conversely, hay may be the feed of choice at times.”

This analogy, along with numerous other examples of shopping around for feedstuffs, is required of producers this year if one is producing cattle in areas that are short of feed.

Not only is the basic ingredient missing, but all the costs continue to escalate. Producers need to seek good information, and keep in mind, the answer will be different for each location and producer.