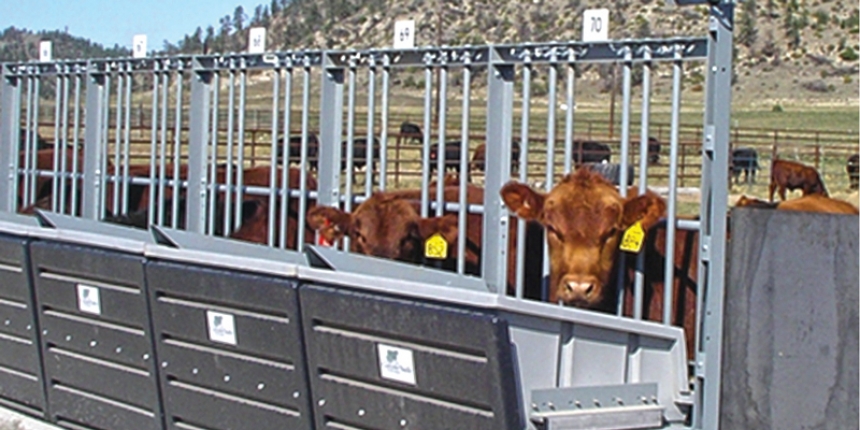 When GrowSafe first started developing feed intake measurement technology in early 2000, the price of corn was around $2.00 per bushel. When corn prices shot up over $5.00 per bushel in 2007 and then up to $8.00 in August of 2012, feed efficiency was on everybody’s agenda. “Today’s price hovering around $4.00 per bushel is not cheap ” says Alison Sunstrum, Co-CEO of GrowSafe Systems, Ltd.
With feed representing as much as 75 percent of all production costs, improving feed efficiency can mean big savings for producers at any feed price but after more than a decade of worldwide feed efficiency research there are still a lot of questions about what feed efficiency is and how it can be achieved.
Residual Feed Intake (RFI) was first identified by USDA researchers. The trait lay dormant on a commercial scale until GrowSafe introduced feed intake measurement systems practical enough for the cattle industry. Residual Feed Intake (RFI) is the difference between an animal’s measured feed intake and its expected feed requirements for growth and maintenance. “Efficient” cattle are those that eat less feed than expected based on their body weight and performance and are termed as having a negative, or low, RFI. “Inefficient” cattle are those that eat more feed than expected based on their body weight and performance. These are termed positive, or high, RFI.
RFI has emerged as one of the important feed efficiency traits for beef cattle says Sunstrum, and it has been one of the most researched traits but how much progress can be expected when selection pressure for RFI is applied, and whether efficiency measured in sires translates to the cowherd are the most important producer concerns that we hear.
RFI selection can significantly impact efficiency of the cow herd and progeny feedlot performance. Research from the University of Missouri has demonstrated that intake among calves similar in body weight and daily gain will vary by 40 percent. In this research, heifers with negative RFI compared to positive RFI improved their progeny feed conversion ratio by 11 percent and efficient sires compared to inefficient sires improved progeny feed conversion ratio by 14 percent. The one-third most efficient cows consumed 20 percent less forage when nonlactating and 12 percent less forage when milking compared to the one-third least efficient cows (Kerley 2010). These results echo cow efficiency research conducted in Canada and Australia. Simply stated it means that producers can run 10 to 20 more efficient cows per 100 using the same resources. When forage quantity becomes limiting, efficient cows will outperform inefficient cows due to their reduced demand for maintenance energy.
It’s easy math in the feedyard. If feed costs $3.50 per day and 10 percent feed efficiency is achieved, that’s a $53 saving over a 150 day feeding period. Dr. Bob Weaber of Kansas State University has calculated that the US feedlot industry could save over $1 billion annually by reducing average daily feed intake by just 2 pounds.

Rethinking Genomic Discovery
Research promised the cattle industry a simple blood test to identify feed efficiency. When asked about this Sunstrum says, “It’s obvious that we are in the phenotyping business, but we and many of our clients are heavily invested in genomic discovery. It is a very exciting frontier, but I think we are overselling what genomic technology can do today, particularly when predicting complex traits like feed efficiency.” The reported correlation of the molecular breeding values to feed efficiency trait has been poor and accuracy is just not good enough for the industry to give up collecting feed intake phenotypes.
Sunstrum continues, “I think Dr. Brian Kinghorn said it best when he addressed the 2014 10th World Congress of Livestock Production Genetics in Vancouver.” In his address, Kinghorn noted, “We promised silver bullets for simple and effective genetic improvement however we have come to realize that life is more complex than we had hoped, and that with current ideas and methods we must maintain a high level of effort to exploit genomic selection in breeding programs. There is an emerging need for systems to ensure ongoing phenotyping for genomic calibration.”
Sumstum says, “The best time to plant a tree was 20 years ago, the second best time is now. This is our customer’s philosophy. They are making progress today. Some are also hedging all bets by banking DNA and/or sequencing with current genomic products benchmarking for the future.”
Steve Munger at Eagle Pass Ranches near Highmore, South Dakota, talks about the changes to their breeding program as a result of feed intake technology brought to the market by GrowSafe Systems, Ltd. “We installed their feed intake system in 2007 and began identifying phenotypic differences in our sire groups immediately. The bulls we market today are more than 15 percent more efficient than the bulls we had sold prior to installing the system.”
Fast forwarding to 2013, Munger says, “In 2013, every female bred at Eagle Pass Ranch finished in the top half of her feed intake contemporary group as a yearling. All other females entered our recip herd. Our feed efficiency selection capability is accelerating thanks to the accurate data produced by the GrowSafe system. In my opinion, no other person or business has done more to advance feed intake and individual animal management technology than GrowSafe Systems, Ltd. They are in a league of their own and are leading this industry into a new realm of cattle breeding.”

How to Measure and Find Feed-Efficient Animals
Few management techniques can be used by beef producers that yield a 10 to 15 percent improvement in production efficiency. By stacking generations selected for RFI improvement, greater than 20 percent improvement in production efficiency can be achieved.
To get started, Sunstrum said, “Consider testing breeding stock in a GrowSafe equipped performance testing center. There are more than 60 of these premium test centers across North America located in 23 states, 7 Canadian provinces and Mexico. These testing centers also offer the opportunity to buy high performance measured feed efficient breeding stock.”
Sunstrum also suggests, “If you have more than 50 bull calves and 50 replacement heifers to test each year, consider measuring feed intake on ranch. The 10-year purchase and support cost is about $25 per animal. “
The GrowSafe platform has made measuring feed intake fundamentally as simple as feeding cattle. GrowSafe customers use a standardized test protocol to measure RFI ensuring consistent and accurate results across tests. GrowSafe trial management software has quality compliance “built in,” meeting ISO 9001:2008 quality management standards to calibrate systems, manage trial activities, report and preserve data. Users cannot amend or adjust the core data collected.
At the conclusion of an RFI trial, a sophisticated GrowSafe server-based analytical routine calculates within test animal RFI values and ranking. This phenotypic measurement is submitted to the customer within two days of trial completion, and if a customer authorizes it, it is forwarded on to breed associations and or contracted third parties to conduct genetic evaluation.
GrowSafe is easy to use, reliable and is rapidly finding application on farms, ranches and feedlots worldwide. “Using real-time sensor measurements to continuously assess system components integrated with a maintenance management and spare parts policies as part of a novel autonomous “sense, respond, maintain” logistics paradigm; we offer unprecedented warranty programs keeping all customers to the current generation of electronics and software,” notes Sunstrum. “By plugging our systems into the Internet, we often know before our customers do when problems with our technology or animals arise.”

About GROWSAFE
GrowSafe engineers, computer and animal scientists have developed an intelligent individual animal measurement, monitoring, and management platform that acquires, analyses, optimizes and presents data from multiple biomentric and environmental sensors in real-time leveraging a standard personal computer connected to GrowSafe servers over the Internet (www.growsafe.com).
The way GrowSafe’s cloud-based, decision-management ecosystem improves farm profitability and livestock animal health and welfare, one animal at a time, through predictive and real-time analysis using an integrated software and hardware platform has received international recognition. These include the 2014 Intel Canada Innovation Award, the 2013 Information Technology Association of Canada Award for Innovation, the Ingenious Award, the 2012 Canadian Manufacturers Innovation Award and the 2012 Dow AgroSciences Innovation in Agricultural Science ASTech Award.