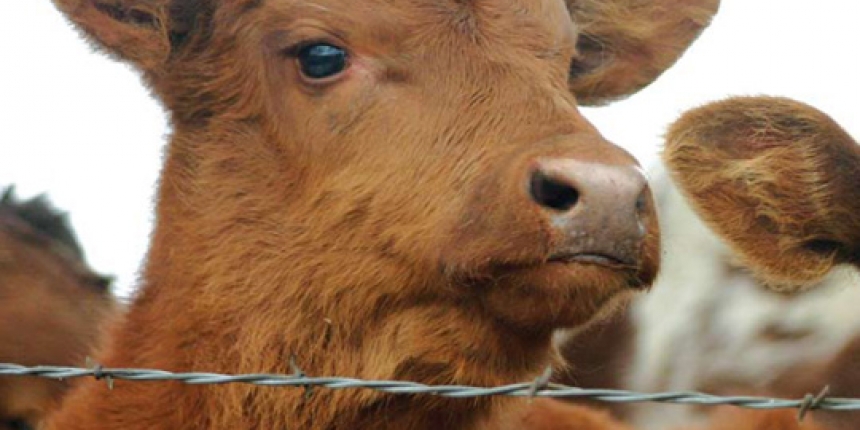 “The bull that’s going to kill you is the hand-fed bucket calf. It will be dangerous when it grows up. If you want a safe bull, let the cow raise it.” Those are the words of caution world-renowned Colorado State University professor of animal science, Temple Grandin offers.
Animal behavior isn’t the only safety issue farmers face. Poorly constructed or maintained facilities and improper use of equipment are also leading factors in livestock safety. Subtle details in facility design, such as lighting and color, can affect animals when they’re handled.
Evaluation of facilities should address whether or not a facility meets the need. Is it designed to facilitate the way it’s being used? Are there hazards such as weak/broken boards or rails, loose pieces of wire or any type of litter on the site? It makes economic sense to utilize existing facilities as much as possible as long as safety isn’t compromised by equipment/facility design.

Because animals perceive colors, use of one color greatly reduces stress and potential for undesirable animal responses. Sudden changes in color cause instinctive hesitation, which leads to confusion and balking. To judge depth at ground level, animals must completely stop and lower their head to look at something strange on the ground. All livestock tend to refuse to walk over a drain grate, hose, puddle, shadow or any change in texture or surface. Planning livestock facilities to eliminate these obstacles enhances livestock behavior.
Ideally, loading ramps and chutes should have solid walls to prevent distracting views as animals walk through them. Cattle have broad, panoramic vision and very limited depth perception, which explains why shadows or mobile objects surrounding chutes and handling areas easily frighten them. Solid panels will produce a calming effect in the animals.

Knowledge of animal behavior can assist livestock handlers in their work. By nature, cattle tend to move from dimly lit to brightly lit areas. A spotlight focused on a ramp will usually help keep cattle moving through that area. Keep in mind that morning and afternoon shadows affect an area differently and alter behavior of cattle. Something as simple as a flapping cloth or turning fan blade can startle animals.

Cattle are also much more sensitive than humans to high frequency noises. Excessive yelling can be a major point of stress for animals. Excited and aggressive behavior of handlers causes cattle to focus on the behavior rather than moving as they’re directed. Rubber bumpers on gates and squeeze chutes help reduce loud, abrupt noises produced by banging metal. While white noise or reasonable levels of continuous sound, such as a radio broadcasting music or talk shows, can calm livestock. Reduced stress can improve weight gain and prevent weight gain losses.

Growing popularity and economic effectiveness of artificial insemination can eliminate the need for a bull, which automatically improves handler safety. First calf heifers are often the next greatest safety threat because the farmer has no experience with the cow’s reaction to motherhood. Cows are “lightning quick” if they decide to charge anyone or anything threatening their calf. Recognizing that an overprotective mother will tend to repeat that behavior is essential to maintaining safety when handling cows and newborn calves.
A guiding principle with all livestock is to respect their ability to cause harm and continually monitor their position in relation to yours. Never underestimate the warning signs of danger such as flattened ears, raised tail or hair on the back, bared teeth, lowered head, snorting or other obvious signals of fear or aggression.

Male animals are always dangerous. Some cattle breeds are more aggressive than others. Animals may not always display open signs of aggression before charging or attacking. Startling noises or nearby movement can trigger biting, kicking, squeezing or stepping on handlers.

In addition to the physical harm animals can cause, they are also a potential disease carrier. Zoonoses are diseases animals can transmit to humans. Examples include rabies, brucellosis, trichinosis, salmonellosis, and ring worm. Maintaining clean facilities, testing, immunizing and implementing sanitary practices in handling animals will help eliminate dangers of disease transmission.

When handlers regularly interact with livestock, they tend to attribute human qualities to the animal. However, any animal quickly reverts to natural instincts in crises or unusual, stressful circumstances. Animals instinctively defend food, shelter, territory and young. Fear or pain may cause animals to react in ways that threaten their own and their handler’s safety. The most common injuries incurred by handlers include cuts and sprains from falls, broken bones and full body injuries. Knowledge of animal behavior reduces likelihood of suffering injury.

Dr. Temple Grandin
Professor of Animal Science at Colorado State University and designer of livestock handling facilities has designed facilities in United States, Canada, Europe, Mexico, Australia, New Zealand and other countries. Almost half of the cattle that are handled in a center track restrainer system use the design she planned for meat plants in the US. Curved chute and race systems she has designed for cattle are used worldwide and her writings on the flight zone and other principles of grazing animal behavior have helped many people to reduce stress on their animals during handling.
To find out more about the work of Dr. Temple Grandin visit: www.templegrandin.com