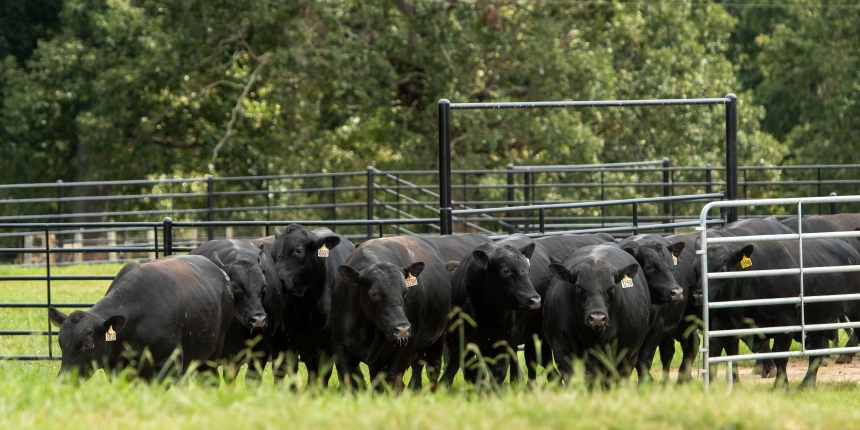 The family ranch. It has long been a staple in the American agricultural economy. And Wilkes Barnett, along with other members of the Barnett family in Washington, Georgia, are enhancing their multi-generational Barnett Angus Ranches to be one of the nation’s leading cattle ranches.

“My grandfather was attending Georgia Tech and he and his father Edward would write letters back and forth each week,” Wilkes says. “My great-grandfather would write letters filled with a ton of encouragement, while also giving a good rundown about how the family farm was doing – how the clover and other crops were growing and updates on the livestock.”

The Barnett family’s love of “all things cattle and farming” was evident in the family’s continued support for each other and the family farm. Eventually, Marion Sr. decided to focus his energies on creating a cattle farm on a portion of the family’s original farmstead. After serving his country in Vietnam, Marion Jr. retired from the military and took up the reins of the family’s cattle business. Not only did Marion Jr. further focus on establishing the finest Black Angus herd on the best land available, but he also instilled this love in his son, Wilkes, who is currently leading the expansive growth of the family’s ranch.

“Just like his father kept him up to speed about the family ranch, my father did the same with me throughout the years,” Wilkes says. And Marion Jr.’s vision for a successful cattle breeding operation – namely, that you need “a good bull, a good cow herd, good management, and good marketing skills” clearly defines Barnett Angus Ranch’s operation today.

“I’ve added a lot of land to our operation – some of which included farms that I bought back that my great-grandfather originally owned at one time,” Wilkes says. “We were able to put back a lot of pieces or sections of land that my grandfather started in the 1940s. This has really allowed us to grow a lot in recent years.”

Since 1947, Barnett Angus Ranches has been honored to have cattle registered with the American Angus Association. “We haven’t missed a year since our Black Angus herd was established,” Wilkes says. “We haven’t stopped or gone to some other breeds.” In fact, the Barnett family has repeatedly produced the top performing Black Angus bulls for decades.

So, what does Wilkes attribute to this success? Quite simply, the Barnett legacy of cattlemen have used a combination of natural breeding and artificial insemination to ensure uniformity of offspring.

“I was taught at a young age about our type of cattle and what made them so good,” Wilkes says. “In addition to looking for great maternal traits, I was taught how to raise good, solid bulls, how to handle cattle properly and how to rotate cattle properly. My dad took care of cattle the right way and it shows in the disposition of our herd. He would often say a heifer would not catch my eye until she has a calf walking beside her.

Then we would know what kind of heifers we had based on their maternal instincts with their calves.”

And while Wilkes’ father and grandfather played a huge role in the cattleman he has become and the ranch he has helped develop, he also stresses the role his mother played in their success in raising the preeminent cattle today.

“My mom was very instrumental to me and my dad,” Wilkes says. “She always shed light on different options we had to make things better. She once told me, when I was struggling to determine what to do about an issue with the ranch, that my father and grandfather knew what kind of cattle they wanted to raise. If the cattle were of the same type and quality that they would raise for themselves, then they knew they were producing the best.” And this gets to the point of what Barnett Angus Ranch stands for: They raise cattle that they are 100 percent happy with for themselves.

As one of the oldest ranching operations in the state of Georgia, Barnett Angus Ranches has earned accolades aplenty during its long-standing history. From being awarded the Historic Angus Herd Award for its fifty years as a continuous producer of registered Angus cattle, to Marion Sr., being inducted into the Wilkes County Cattleman’s Association Hall of Fame, the Barnett family has much to be proud of.

Today Wilkes Barnett, shares the same passion and prowess for cattle ranching as his forebears. Since his father’s death in 2016, Wilkes has worked diligently, along with his friend and herdsman, Chris Goldman; his life partner, Amber who is the mother of Wilkes’ son Maximus, as well as Wilkes’ daughter Lucy and Amber’s children, Memphis and Branson, to grow his family’s ranch, while staying true to the original vision of providing exceptional bull development that others can partake in.

The upcoming Barnett Angus Ranches third annual bull sale on Saturday, November 5, 2022 in Washington, Georgia, will be featuring “one of the most powerful group of bulls our sales manager has seen,” says Wilkes. The sale will feature 90 two-year-old Angus Bulls and 40 commercial females. Raised on the ranch, these young commercial females are bred to low birthweight BAR bulls and will begin calving in early December 2022.

The sale will include a powerful offering of AI sired, athletic and genetically elite Angus bulls. As Wilkes explains, 75% of the offering rank in the top 30% of the breed for weaning and yearling wt. EPDs and weaned calf value ($W). There is free delivery within 100 miles with purchase of multiple bulls.

“Each year our goal is to produce better than the previous year but without making drastic changes to our breeding,” Wilkes says. “Every animal can always be a little bit better. And we are always focusing on the continuous improvement of the ranch – focusing on improving the management of the grass, managing the water better, improving the facilities, making cow handling better, etc.”

Wilkes’ great-grandfather Edward Barnett, his grandfather Marion Barnett, Sr. and his farther Marion Barnett, Jr., have left a lasting legacy-filled impression on the ranching community – one that combines the love of land and the love of cattle. That, along with Wilkes’ intrinsic understanding of characteristics that a successful cattle operation entails, means that the Barnett Angus Ranch will continue to make an impact on the ranching industry for generations to come.