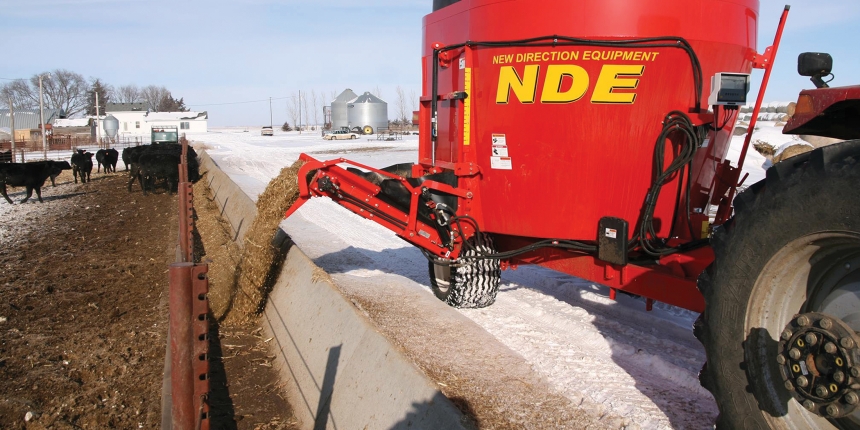 Look around most dairy farms, ranches and feedlots and you are bound to see one (if not more) total mixed ration (TMR) mixers gracing these agricultural environs. Considered to be much-needed heavy-duty blenders that provide exact variations of feed for livestock rumen health, TMR mixers are being used to improved feeding efficiencies in a streamlined, economical way.

“Over the past several years there has been an ongoing transition from horizontal auger and reel type mixers to vertical screw mixers in many operations. The vertical screws allow for more aggressive cutting and mixing of long forages that were more difficult to mix effectively with previous feed mixer designs,” says Bob Cochran, general manager for Highline Manufacturing, a division of Bourgault Industries.

Highline offers the AccuMix™ AM1000S self-propelled, self-loading TMR feed mixer. This is a 300hp, 1000cuft twin vertical screw TMR feed mixer with true off-road capability and a loading arm that will accept any commodity – silage, grain, supplements, even bales – loading the precise amount of each ingredient and ensuring an excellent mix. It is the only self-propelled TMR mixer designed and manufactured entirely in North America.

Cochran points out that there are still limitations of the vertical screw TMR, in that if long forages are part of the ration it can take a considerable amount of time for those forages to break down to acceptable cut length in the ration.

“Pre-processing the forage with a bale processor equipped with a secondary feed chopper is a means of achieving the required cut length before the feed is added to the mixer,” Cochran says.

More recently, self-propelled, self-loading feed mixers are entering the North American market. While they have been used in Europe for many years, as Cochran explains, the more severe operating conditions prevalent in most areas of North America have limited the effectiveness of these units.

“However, with the Highline® AccuMix™ AM1000S being designed and manufactured in North America, it has been developed with those challenging conditions in mind,” Cochran says. “This is a machine that does not require a concrete or paved surface to operate.  It can feed in the mud, snow, and ice, in a barn or on the range, in temperatures ranging from -40F to 110F.”

John Runge, international sales manager at Patz Corporation, says the company demands that the first cow eats the same as the last cow in every batch. From 180 to 1800 cubic feet of capacity, Patz offers 30 vertical mixer models in stationary, trailer, and truck-mount options.

“From our patented two- and three-speed Torque Autoshifts in trailers, to direct hydraulic drive adaptation in truck-mounts, and direct electric drive in stationary mixers, Patz leads the industry in innovation across all mixing platforms and applications.

“Penta uses many different wear components that are made from stainless steel to ensure that we are lasting longer in the harsh feed mixing environment,” says Penta president Glenn Buurma.

NDEco, a Hi-Tec Group company, joined the TMR vertical feed mixer industry over 20 years ago. Today, the company offers a series of vertical mixers including the S Series mixers, which are smaller economical feed mixers. The company’s FS Series TMR mixers are available in single, double or triple auger mixers, all of which are all-purpose feed mixers suitable for all types of operations. And the U Series are dual mixers features a unibody construction, making it an economical and compact lightweight mixer.

Historically Speaking
The evolution of today’s TMR equipment is interesting. For example, in the early 1980s Patz offered horizontal drum mixers-cement mixers for feed; followed by three- or four-auger horizontal stationary mixers. These were primarily utilized as meter-bins or feed hoppers for staging the next feeding. Farmers would fill them up to simply “run-out in the bunk in the morning” to save time and some labor.

As Runge explains, mixers could improve palatability by blending forages, but concentrates were largely “top-dressed” in the tie-stall barn or tease-fed in the milking parlor.

“The TMR would not come into its own until the cows moved to the free-stall and feed storage went from vertical silos to horizontal storage—bunkers, bags, and piles. Then it was all economies-of-scale.  Herds, piles, and bins all got bigger—labor got lean,” Runge says. “We feed silage and concentrates in horizontal auger mixers, but could not process long hay, feeding round-bales ‘free-choice. The cow would seek out long, dry roughage for what we called the rumen scratch or tickle.”

“Upright silo can hardly be beat for nutrient value preservation, though bagging is close,” Runge says.

But forages in the field are maturing daily, changing hourly even in TDN value. Silo filling and bagging limited the pace of harvest, with significant nutritional variation in every 15 to 20 feet vertically of stored feed.

“Farmers noted feed changes “in the tank,” milk and components dropping unpredictably as the silo spewed “new feed”—a different field, new or old seeding, etc. Custom harvesting and the feed pad changed that,” Runge says. “Feed consistency maintains a more stable rumen for higher, sustained milk production. This is where the science began to catchup with the application, and the true TMR emerged.”

“We learned that cows are like children, picky eaters that play with their food. The TMR needed to be balanced and mixed to limit ‘sorting,’” Runge says. “We needed a physically effective NDF (peNDF) that was 4 to 5 inches to form a healthy rumen mat, and a consistent blend of forage-to-grain in every bite.”

The sizes of TMR equipment has also evolved over time. Penta Equipment vice president Trevor Newman says that 20 years ago smaller-sized TMR equipment was more popular and lighter built. “Today the popular sizes are larger and more robust,” Newman says. “Many of the farms also have adapted different way of handling feed and that has continued to drive innovation in how the silage is mixed and delivered to the cows.”

Much of the silage today is stored in bunks or on large covered concrete pads. In the past this was in vertical silos that had different conveyors and equipment to fill and unload.

“Today most of the feed is handled by large payloaders that can fill a mixer quickly and accurately,” Newman says. “The industry continues to change and there is research being done on how automation and robots may continue to impact this activity.”

Considerations To Make
What should producers look for in TMR equipment for their needs? Cochran says the three most critical elements are mix consistency, reliability, and efficiency.

“Cattle are very selective eaters and variations in their feed impact performance, so the mix has to be very consistent throughout the load to ensure that every animal is getting the right amount of each ingredient, every time,” Cochran says. “The machine has to be reliable as we know the cattle have to be fed – waiting for parts or repair isn’t an option.”

From an efficiency perspective, producers need to evaluate if the mixer can feed more animals in less time wasting less feed at the same or lower cost than other offerings, when all aspects of the feeding operation are factored in.

“The best way to evaluate all of these things is to request a demonstration to see the machine running in their specific operation,” Cochran says.

In addition, Cochran says it’s important to note that many producers under-value their time. Feeding can consume a significant portion of their day, time that could be used in other areas of the operation bringing more value.

“While it is critical to ensure feeding is done properly, there have been technological advancements made that will allow for improved feeding in less time with fewer resources,” Cochran says.

Runge says it is important for producers to evaluate the performance characteristics of TRM equipment. “Also look for appropriately sized mixer. Our rule of thumb is six cubic feet per cow per day. Think about pen size, and frequency of feeding,” Runge says. “Think about the future. Are you growing? Plan ahead.”

Buurma adds that producers need to focused on equipment that offers a consistent mix every time. Also evaluate the dimensions of the equipment, the horse power needed, discharge options, and whether the company offers a well-supported service network to ensure the equipment is always able to run.

In addition, Runge points out that the industry has gotten very singularly focused on price and the TMR mixer brands have become very commoditized.

“Look at your tractor, your chopper, expect the same from your TMR equipment,” Runge says. “Farmers put so much work and capital into producing a crop, into breeding a cow, and then source a mixer on price and run it too long.”

The type and amount of maintenance of today’s TMR equipment can vary from machine to machine and is something to consider in any purchase decision.

“Manufacturers like Highline want to ensure the reliability and longevity of the machine as well, as that customer is unlikely to purchase again in the future if they have experienced problems,” Cochran says. For that reason manufacturers will lay out service requirements of the machine in the documentation supplied, and if those requirements are followed, producers will maximize the life of that unit.

“A healthy mixer is a healthy cow,” Runge says. “Think of a food you eat all the time.  That first bite, and there is change in texture or seasoning—under-cooked, over-cooked, the chef used cilantro. You notice. The cow notices too. Maintain the screw and knives for TMR preparation and presentation consistency. Keep it clean. From the top of the vertical auger to the tip of the discharge – feed spoils, discolors, smells, and contaminates.”

In the future Cochran says that there will be an increased focus on efficiency and precision in feeding equipment.

“Feed is an expensive component of cattle operations, and has a significant impact on animal performance,” Cochran says. “The producer that can feed his herd with high levels of efficiency and precision will put themselves in the best position for a strong bottom line.”