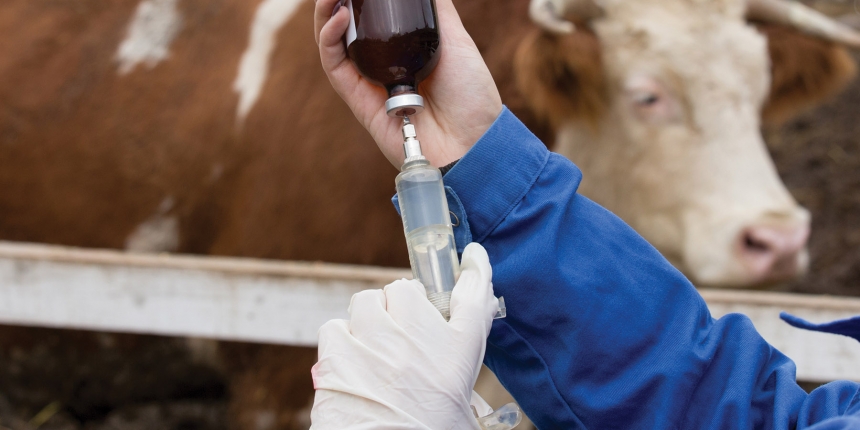 A successful calving season involves plenty of advanced preparation, most of which is geared towards ensuring the health of cow and calf. A big part of this preparation involves a carefully curated vaccination program.

Proactive disease prevention for the cow and calf - through nutrition, management and vaccine protocols - while never surefire, is still one of the most influential courses of action that is completely within human control.

Providing the cowherd with appropriate and well-timed vaccinations helps build antibody levels in the colostrum necessary for immune transfer in the calf.

Antibodies and calf immunity
Like most newborns in the animal kingdom, calves aren’t born with a strong immune system of their own. They also don’t receive any sort of immune transfer while in utero. Instead, they rely on the maternal transfer of antibodies via colostrum received within the first 24 hours of life.

However, not all colostrum is created equal. The quality will vary from cow to cow, and it will only carry the antibodies that she has encountered via environmental exposure or vaccination.

A cow doesn’t start making colostrum until shortly before calving. Research shows that she will start collecting the antibodies in her mammary system about four to six weeks before calving to be incorporated into the colostrum.

According to a research report by First Defense Calf Health, this collection is usually the highest in the two to three weeks immediately before calving. Vaccine-induced antibody generation within the body usually takes seven to 14 days.

With these windows in mind, timing for pre-calving vaccination administration is crucial for the calf to receive the full benefit.

The vaccine program
Bear in mind that vaccine response is never perfect, even under the most optimal conditions with a great environment, proper nutrition and low stress. Not all calves will get all the antibodies from the colostrum no matter what you do. There are a plethora of external unseen factors that can impact the effectiveness.

For example, vaccines do not always work the exact same on each cow. Consequently, the calves may end up with different results while consuming different colostrum from their dams.

Most pre-calving vaccines are done in a two dose series and are administered two weeks apart. For first calf heifers or using a new vaccine within a herd, these two dose series are the most reliable.

To ensure the full round of vaccination is completed in time for the best antibody transfer to colostrum, the final dose should be given about 10 weeks prior to anticipated calving.

Another consideration in selecting pre-calving vaccines is the type and composition. There are different vaccine bases, which include either an oil base or alum that serves as an adjuvant which is an agent that makes it more effective. The oil adjuvant provides antibodies that last longer making it ideal for cow vaccines that will need to pass on to colostrum.

Diseases that cause abortion or fetal complications should also be considered in the health plan. Common ones such as infectious bovine rhinotracheitis (IBR) and bovine viral diarrhea (BVD) are ideal vaccinations to give before calving not only for the cow’s well being but also to protect her fetus.

It should be noted that certain products, especially powerful ones that include those that contain live viruses or gram negative bacteria, can overwhelm a cow’s immune system if too many are given at once. This can actually cause them to be less effective. Always run your program by your veterinarian to ensure nothing is too intense and that your products complement each other well.

Is scours worth it?
You can’t discuss pre-calving vaccinations without discussing scours. A scours vaccine can help the newborn calf from potentially being sick within that first period of life which can set them back in growth and from building that strong immune system.

To be effective, scour vaccines must be boostered to the dam each year prior to calving on top of the initial two-series protocol first given (usually as a heifer).

But the effectiveness of scours vaccinations can vary quite a bit. This makes the cost of implementing it highly debatable among producers. In addition to their being numerous strains causing scours in calves, the risk varies quite a bit from year to year.

For example, years that are drier and cooler tend to reduce the incidences of scours automatically. Likewise, there can be variance among groups and different pastures. With these variables, it is difficult to predict if scours vaccinations are worth the expense in a particular year or particular region.

Final considerations
Regardless of protocol, it should always be underlined that no vaccine is a substitute for poor maternal health before, during and after calving. From the time a calf hits the ground to finishing its final serving of colostrum, there is a race between pathogens and antibodies.

Maintaining a clean area (especially when a cow is calving) can help prevent pathogens from being ingested before the antibodies from the colostrum have a chance to help build in the immune system.