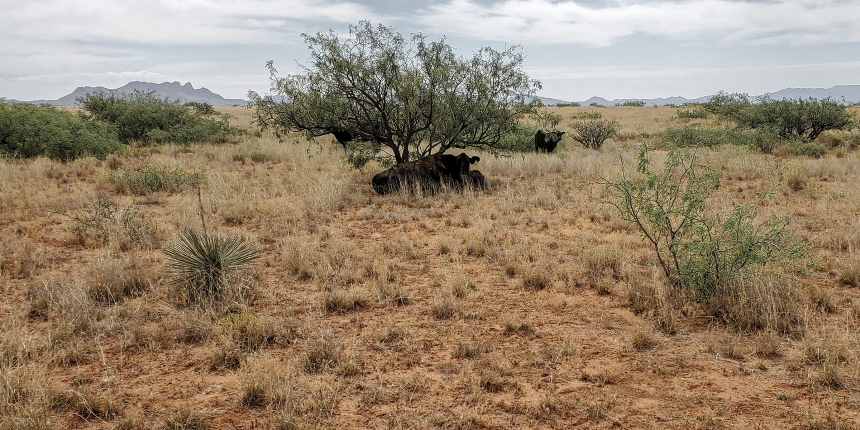 You might want to sit down before reading this. Or have a stiff drink in your hand.

That’s because you’re about to read the weather outlook and it ain’t pretty. So pull your cinch a little tighter and take a deep seat, because the rough ride on the weather front isn’t changing anytime soon.

But with a drought plan and Riomax® in your corner, you have the tools to survive until it rains again. Or at least rains at the right time again.

Cold water has returned to the equator west of South America. “That La Niña event is going to have a strong impact on the drought in the western U.S., and that’s going to continue to grow,” Douglas said.

“We also have cold water from the coast of California in Baja, all the way toward Hawaii. We know that cold water (there) promotes a very strong North Pacific high and also favors drought in the U.S,” he continued.

Looking ahead to the winter of 2021-22, Douglas said the high-pressure ridge will continue in the North Pacific because of the warm water. “Also, with the cold water along the equator, that favors a very weak jet across the southern tier of states,” which brings dry weather. “We have a very strong (Canadian) trough starting to bulge south into the midsection of the United States. Not much different than last year.”

With that flow pattern, temperatures will run about one to three degrees below normal for the entire winter, he predicts. “I will warn you, it looks like it is going to shift West and East during the course of the winter. It’s going to be more toward the East at the beginning. And by the time we get toward the end of the winter, I think more of the cold in the Northern Rockies and Western Plains,” he said.

“The only really moisture in the country is going to be in the far Northern Rockies, associated with Alberta Clippers that will come down prior to each cold outbreak, and then some moisture dribbling into the Ohio Valley.”

The outlook isn’t all bad, however. “It does look like we have a pretty good chance of El Niño developing toward midyear next year, at which point this drought that we see in the western United States might possibly start easing going into the spring. And most certainly the winter of 2022, 2023 could be a wet winter throughout the western United States.”

Getting From Here to There
So how do you get through this winter and early spring with the continued drought that Douglas predicts? Keep your pencils sharp and your drought management plan close at hand.
Clearly, fertility is job one for a rancher. You can’t sell a calf that’s never born or doesn’t survive to weaning time. For your cows, however, fertility is a luxury. Without an adequate plane of nutrition to keep the cow and her fetus healthy, the calf loses.

In a drought as tough as this one, winter pasture and hay will be low quality, lacking many essential nutrients. In short, it’s gut fill. That means helping your cows squeeze the most nutritional value from low-quality feed becomes more than just important—it’s essential.

That’s where your supplementation strategy becomes critical. But cutting costs just for the sake of cost-cutting may not be the best way to handle drought-driven decisions, says Ashley Kettner, former R&D research coordinator with Riomax®.

And that’s where the intersection of genetics and nutrition becomes key. “Because you can have all the genetics in the world, but that’s irrelevant if you don’t have the nutrition to get them there,” he says.

Not all pastures and rangeland are the same and you’ve got to match your cows to the environment they make a living in. “But even within that environment, a solid mineral program is necessary,” he adds.

By that, he means one that’s fully chelated, not just enough so it can say so on the label. The soils in his area of North Dakota are high in iron and the water is high in sulfates. “So if you’re going to buy a cheap mineral, it’s not chelated most of the time. Most of the minerals you need, the zinc, copper, and manganese, they’re tied up by the iron and the high sulfur water,” he says. “So you think you’re getting a good deal, but you’re putting something out the cattle aren’t utilizing.”

Schaff likes tubs over loose mineral, even if the loose product is fed in a weather-protected feeder. “With the Rio tub, it can be rainy or snowy and you’ll always have a fresh mineral source that they’re constantly consuming,” he says.

“The Rio tubs have worked well; they’re good for high-quality mineral. If you use the right mineral, it’ll show up in your reproductive performance and your cattle health,” he says.