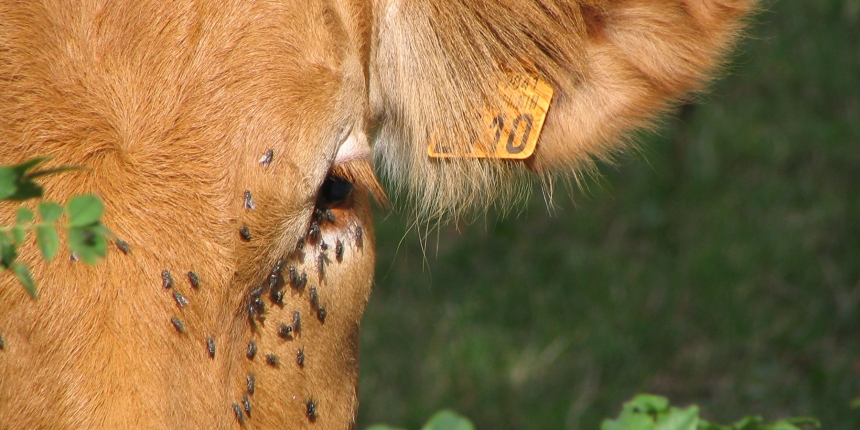 Defending Livestock Operations at Every Point

Flies and lice can wreak havoc on the productivity of livestock. They can transmit disease, destroy property and disrupt feeding — and cattle that aren’t eating aren’t growing.
That’s why Bayer Animal Health introduced its Defense Point System, which offers a specific strategy for effective pest control throughout a producer’s operation. The system works by dividing the operation into four key treatment areas where pests thrive, and identifying the products best suited to those conditions.

Defense Point 1 – On-Animal
Animals are ground zero for pest damage. Many pests spend the majority of their life cycle on cattle and take blood meals several times a day. An infected pest can also transmit disease, which can lead to serious loss of productivity. Products that can be used on animal include pour-ons, on-animal sprays and dusts.

Defense Point 2 – Facility
Where cattle sleep and take shelter is a prime location for pests to pass from one animal to another. Treating the facilities on an operation may aid in stopping the spread of pests among livestock. Products to treat facilities include sprays and baits. 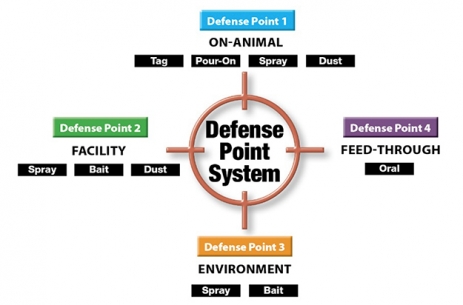 Defense Point 3 – Environment
Pests may use the areas beyond the immediate housing facilities to breed and replenish their numbers. Treating potential pest breeding areas that surround livestock buildings and horse stable areas may play a significant role in reducing the pest population. Grassy areas surrounding lagoons and feed spillage areas are examples. Products that can be used in the general environment of an operation include sprays and baits.

Defense Point 4 – Feed-Through
Several species of flies flourish on the natural actions of cattle, both feeding and laying their eggs directly in cattle manure. With the use of a feed-through product, producers can take a proactive effort toward disrupting the fly’s life cycle. Products that can be used as a feed-through include oral larvicides.
With this approach, producers can take a comprehensive approach to pest control, maximizing their efforts to reach their entire operation.