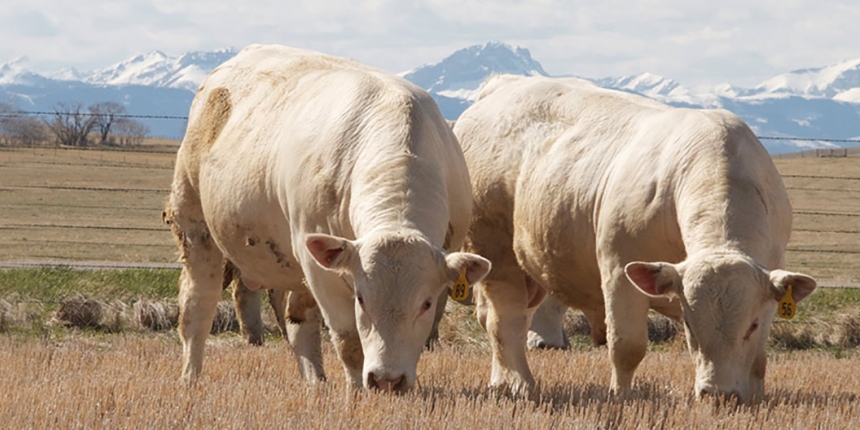 A breeder’s job is to supply superior genetics to commercial cattlemen, and this is usually facilitated through bull sales, production sales, semen sales, etc.  This seedstock breeder takes this job very seriously.

The DeBruyckers are third-generation ranchers near Dutton, Montana who have been in the ranching industry nearly 100 years, and nearly 60 years raising purebred Charolais.  Lloyd and Jane DeBruycker are leaders in promoting the breed, but it all began in the late 1950s with a single Charolais bull.

They first used Charolais in a cross-breeding program on commercial cattle, and soon realized the tremendous gain in red meat production and enhancement in the quality of the beef. They bought their first registered Charolais heifers in 1963.

Lloyd and Jane have retired from the day-to-day operation, but four of their seven children (two boys and five girls) are directly involved and the other three assist when they can, and most of them have cattle of their own.

Their son Brett (and his wife Kay) are very involved with the farm and cattle.  “My brother Mark and I along with my brother-in-law Joe (Cathy) and sister Jacque are the principal parties of the operation.  Jacque does the books, Kelly handles promotions, Tammy is an accounting professor and owns cows and sells bulls with us and my sister Jody assists with the advertising.  Now we also have the next generation coming back in, to be a part of it as well,” Brett says.

“Our goal today hasn’t changed from when Dad and Mom started the operation in the 1960’s,” Brett says.  “Our goal is to produce bulls that help the commercial rancher be profitable.  We feel that in order to do that, you must produce bulls that are small-headed with smooth shoulders (siring calves with easy birth) that have a lot of power and growth performance,” he says.

“The thing that’s kept us on the right path all these years is that we also feed cattle and know how they perform in the feedlot and hang in the packing plant.  Dad showed a few cattle back in the day, but that’s never been our thing.  We never got into the fads of the 1980’s and 1990’s nor the current fads of the show ring today.”  Fads come and go, but a responsible breeder has to keep supplying cattle that will work in the real world, keeping customers profitable.

“To do this, cattle must have a lot of natural growth along with calving ease.  I feel our cattle have as much performance, meat and natural growth of any Charolais in the world, yet we’ve put it into a smooth package that will assure calving ease,” says Brett.  In earlier days, a person had to choose one or the other (low birthweight/easy calving or exceptional growth) but with the right selection and genetics we now have cattle that will do both.

“We’ve bred these traits into our entire line, with a very line-bred herd.  We bring outside bulls into our herd periodically to test them against what we’re doing, but are very selective on how we go about that.  If you trace the lineage of our bulls you’ll find they are all related, quite a few times,” he says.  This helps guarantee uniformity and consistency in desired traits.

The annual bull sale is the first Saturday in April, offering 600 to 650 bulls at auction.  “We also offer private treaty bulls following the sale but every bull is available to customers at the sale.  We sell between 900 and 1000 bulls each year,” Brett says.

The ranch also has a lease program, leasing bulls for one to three seasons.  “My dad started this program in the early 1980’s--something new that hadn’t been done before.  It’s not a profit-maker for us, but a customer service.  It helps new people try Charolais bulls, so they don’t have to make a big plunge on buying a bull; they can lease one for a season or more to see how they like our genetics.  After that they are typically hooked,” he says.  Usually after the first few seasons of leasing, they become buyers.

The leased bulls come back after the breeding season, in September-October.  “We shine them up, trich test them, make sure they are in good shape, and sell them as used bulls.  We have various ways we help our customers obtain a good bull,” he says.

“We cull extremely hard.  There are no perfect cattle so we keep trying to improve on what we’ve built.  We use a lot of young bulls and keep moving toward the future.”  The seedstock breeder’s job is to put in the effort and do the legwork on genetic improvement so their customers can benefit.

“We’ve never gone to strictly polled genetics, and have always tried to intersperse polled and horned genetics.  We think the horned genetics have so much natural performance and do-ability that a person doesn’t want to give that up just to have polled cattle.  In our opinion, a significant reason for our polled cattle being as good as they are is the horned genetics behind them.”  The breeding program has selected and mixed the desired traits to where it can all be there, but in a polled package.

“We’ve never paid much attention to EPDs.  There are times these can do more harm than good, if people only select cattle by the numbers,” says Brett.  Some things can’t be measured by or addressed with EPDs.  A bull (or cow) might look great on paper but not be functional in the real world.

“We select first by looking at phenotype of the animal, and its sire and dam, along with the calf’s natural performance—on the cow from birth to weaning, and then in our feedlot test.  Then if the animal has good EPDs that’s just a bonus.  EPDs are the last thing we look at; they can be helpful, but should not be what you base your selection on,” he explains.

“Feet and legs are important; a bull must be able to travel in rough country.  Not every bull is perfect and some have issues, but the Charolais breed doesn’t have much problem with structure or calving.  In earlier days these were two of the issues where they got knocked.”  This breed has come a long way, thanks to conscientious breeders.

“We run our cattle just like commercial cattle.  We are there during calving, and here in Montana we have to feed them in winter, but we don’t baby them.  They have to travel and forage for themselves and get the job done like they would on a commercial ranch.  Our environment helps make the cattle hardy and assists in sorting out the ones that can’t do it.  Our cattle can to adapt to many different environments.”