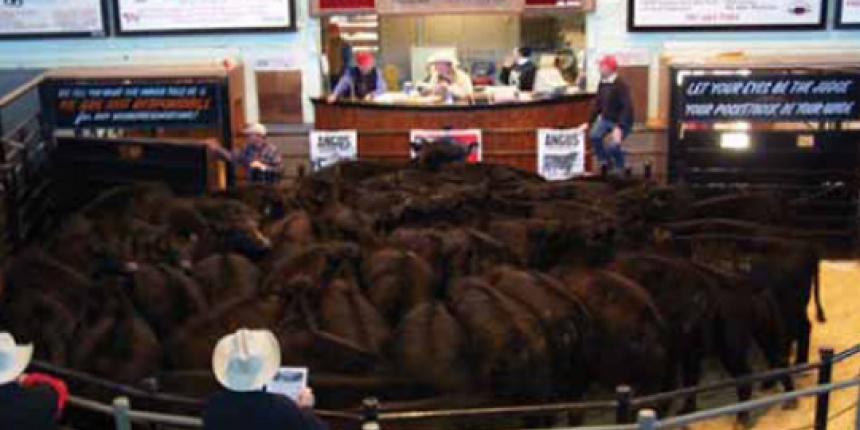 “To produce volume numbers of low birth weight – high growth seedstock that excel in the economically important traits that are vital to the success of the commercial ranchers of this region." That is the mission of the Tokach family and Tokach Angus Ranch, located four miles east of St. Anthony, ND and 25 miles south west of Bismarck. According to Dick and Theresa Tokach, the original 160-acre home quarter was homesteaded by Dick's grandfather in 1908.

"This year the Tokach Angus Ranch becomes a Century Ranch," notes Dick. "My grandfather emigrated from Hungary to this country in 1895 and settled in Minnesota. After working for the railroad, he knew some people from the old country had settled in North Dakota. So, he came here and homesteaded the home quarter in 1908." A few years later he added another 320 acres. Now, 100 years later, the Tokach Ranch has stayed in the family for four generations with a fifth generation now in college preparing to return to the ranch after graduation. First came Dick's father, who purchased the 480-acre ranch in 1929. Dick attended North Dakota State University and came back to the farm full time in 1954. In 1955, he and Theresa married and together they expanded the Tokach Angus Ranch to the point that their two sons could eventually join in the family ranch. Theresa laughs as she remembers her initial reaction to ranch life. "I was a city girl from Mandan. It was quite an adjustment. I cried twice: first when I came to the ranch and then when Dick and I built a home in Mandan in 1997! Dick's mom was very patient with me and forgave me for all the things I didn't know or did wrong.

Over the years, I really learned to love living on the ranch." Success has come through hard work and a desire to stay on the cutting edge of change. Dick himself bought the first purebred Angus heifer in 1950 and except for a few purchased heifers over the years, that bloodline can be traced to today's herd. "She was Blackbird E-153," says Dick. Blackbird E-153 came from the famed Oak Coulee herd at Flasher, ND. Ever since that first purchase in 1950, the goal has been to constantly evaluate the seedstock and continue to advance and improve the Tokach Angus herd.

Since 1963, the herd has been enrolled in Angus Herd Improvement Records (AHIR). In addition to easily measured performance and carcass traits, selection pressure is also placed on scrotal circumference, fleshing ease, mothering ability and dispositions. Artificial Insemination (A.I.) was first used in the breeding program in 1977. Then when eldest son Richard graduated from North Dakota State University in 1979 and returned to the ranch, he and his Dad began to increase the A. I. to the point that today in May, they heat detect and A.I. more than 600 females. Another change since those early years has been a change in selling seedstock. Dick says, “In 1975, we held our first production sale in Mandan. It has now become an annual event held each year on President’s Day.

Last year we sold 140 bulls (2007 bulls), 12 two-year old bulls, 35 bred commercial Angus heifers and 30 bred purebred Angus heifers. It’s hard to believe that this was our 33rd production sale.” Quality of the Tokach Angus stock is reinforced by the huge numbers of repeat buyers. A lot of the buyers turn out to be repeat buyers. In addition to the quality bloodline, Dick notes that another desirable quality of the Tokach Angus females is their ability to excel under a low input environment that will help their customers keep their operation output lower. In 1987, son Brad graduated from Wahpeton School of Science with a degree in Auto Mechanics and returned to join his father and brother. “My parents urged me to go on to school, because they felt it would be good for me to get out and away. Being away from the ranch gave me the chance to see things from a different perspective.” At the same time, Brad knew that the mechanic degree would always be helpful back on the ranch.

By 1997, Dick and Theresa built their retirement home in Mandan. Dick says it was time. “Things have changed so much. It’s amazing the advances that have taken place over the years. You need somebody younger to move the herd ahead.” Dick and Theresa continue to be part of the operation, but not on a daily basis. “If they need my help at the ranch, they call me, but they are in charge. Now, I ask them what I can do.” Now Richard and Brad work together in partnership, each getting the opportunity to do what they like best. For Richard, that involves a lot of the planning and the planting. Brad, meanwhile enjoys the cows. “I really get into the calving and working with the baby calves. I like seeing the cows moved to new pasture.” He adds, “We’re still a ranch that believes in horses. We move everything by horse.” Their partnership also works with their family lives. Richard and Kathy have children in college, while Brad and Nita’s oldest child is in elementary school.

“That works out for us, though,” says Brad. “When one of us has to be gone, the other will be around.” When three families are involved in the same business, expansion is the logical answer. So, gradually over the past 30 years, the Tokach Angus Ranch has increased in size to its present size of over 9,000 acres. The majority of the land is pasture land on the backside of the Missouri River breaks. Steep hills, woody draws, rocks and rugged terrain are characteristic of most of the summer pastures. The cropland is used to provide feed for the cattle. Key to success with the pasture land has been the development of a pasture rotation. This rotation has proven beneficial since drought can rear its ugly head at any time. Richard says, “Rotation gives us the chance to do more with the pastures and to run more cows. We actually graze our cattle into January before we begin to provide them feed.” He remembers vividly the drought of 1996, when the cows had to go up to two miles just to get to water. “That certainly doesn’t do much for weight gain!” Since that time, the Tokachs have worked to add water lines to the pastures so that the cattle will have ready access to water. Richard adds that they try to sit down in early spring to plan out the pasture rotation for the entire year. “Of course, we adjust to changing conditions. However, we have a plan down that we can follow.”

At age 50, Richard looks at the changes of the past 20 years and believes that ranching will always be a continual learning process. “We have to use what’s out there, and we have to adapt and learn as we go.” Certainly, there is uncertainty in the future, but at the same time, the Tokachs look with anticipation to the future. “Our long range plan is still to grow and to improve. We’ll continue to economize where we can and adjust as the conditions change. We believe that there is a lot of opportunity in the future.” Brad concurs, adding, “Being in something for the long haul gives you the opportunity to see the benefits and changes over the years. We owe a lot to our customers. It is their belief in our product that makes the difference.” It is at this point that Dick and Theresa point with pride to the five generations of Tokachs that have been part of the agriculture world. A third son, Mike has his PHD in swine nutrition and is employed with Kansas State University. Paul is a graduate of Wahpeton School of Science with a degree as a diesel mechanic. He currently works in management with Butler Equipment and heads home to help his brothers when they need help on the ranch. Amy is a 1980 graduate of North Dakota State University and teaches in Beulah, ND. She and her husband raise registered Rambouillet sheep on their ranch.

Currently, three of Dick and Theresa’s grandchildren attend Kansas State University while a fourth just graduated from high school and is heading to Kansas State. Theresa says with pride that Rebecca, who is a senior in Meat (Animal) Science, was the top scholarship recipient of the National Cattlemen’s Foundation and the Chicago Mercantile Exchange. She presented her award-winning essay at the 2008 National Cattlemen’s Convention in Reno. The theme of her essay was how to work effectively and efficiently with all groups involved in the beef industry. Dick and Theresa have instilled in their children the importance of becoming involved. Theresa says, “We believe that it is important to stay up with the industry and to become involved in the beef industry. You need to make contacts to stay up with the industry.” Both

Dick and Theresa have been active in state and national organizations, and Richard and Ben have followed in their footsteps. Looking back, Dick and Theresa are proud of what the boys have done with Tokach Angus Ranch. “It’s wonderful to see the changes,” adds Dick. “They have upgraded the homestead and done things that we probably should have done.” Pride goes both ways; however, as Richard says of his Dad, “I give Dad a lot of credit. He was always trying to improve and used the new technology as it came along. We have all learned that it’s a continual learning process and we have to adapt and use the tools that are out there.”