Cowboys, Cattle and the Colorado River 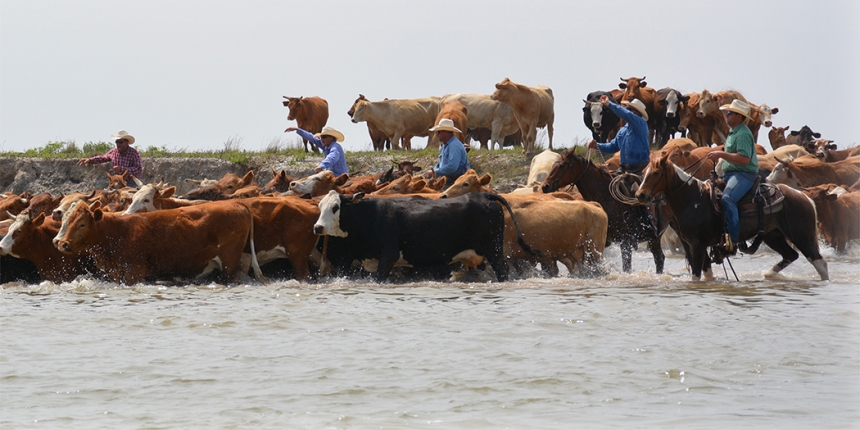 Cowboys, Cattle and the Colorado River

Modern day Lonesome Dove happens twice a year, just outside the quiet fishing town of Matagorda, Texas. Can you picture it? It is a sight straight out of the Old West, but with a 21st century spin; iPhones in the shirt pockets belonging to sweaty cowboys and motorboats assisting swimming calves. Even with modern technology, this century-old tradition still takes place for the Huebner Brothers Cattle Company of Bay City, Texas. For over 100 years, this ranch has been driving its cattle from their winter pastures located on the 30-mile Matagorda peninsula, which runs from the mouth of the Colorado River in Matagorda to the Port O’Connor ship channel, to their summer pastures located at the Huebner headquarters south of Bay City. The ranch runs approximately 700 cows, primarily Beefmaster and Beefmaster influenced cows that are bred to registered Beefmaster bulls.

Keith Meyer, a member of the Huebner family and an operator at Huebner Bros., says “the main thing we appreciate about the Beefmaster breed is their hardiness, their fertility, and their ability to grow. It works in our program because of where we are located and the kind of country we are putting them on.”
While on the peninsula during the winter, the cows graze on salt grass and thrive in the harsh coastal climate. Meyer says that their Beefmaster cows really hold up well in the harsh country found on the peninsula, they thrive during the winter despite only grazing on saltgrass, dealing with flies and the humid climate.
“We bring the cows down here in early to mid-November, depending on the weather and growing conditions at home. They do very well during the winter and that allows us to rest our pastures at home. They [the cows] do know when it’s time to come home. When you start getting into spring, with warmer days, the flies get a little tougher on them,” says Meyer. 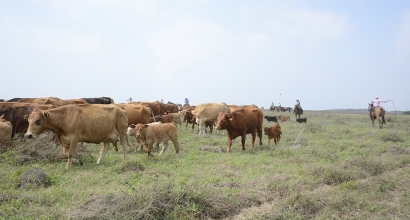 Not only does the heat and flies encourage the cows to go home, but the cowboys have to make sure to get the cows moved before the storm and hurricane season rolls in during the summer. So each year, around Easter, a dozen or so cowboys round up the cattle on the island and gather them in a holding pen. From there the smallest calves are loaded into a trailer so they can ride a barge across the Colorado River, which lies between their winter home and summer home. Then the cows and bigger calves are driven down the island to where the mouth of the Colorado River meets the Gulf of Mexico.
To finish their journey, the cows and big calves must swim across the river, which is 200 yards across and 15 feet deep. According to Meyer, “every swim is a little bit different”. For example, this year 53 head of older, lead cows voluntarily swam across the river a few weeks early, so it took a little more pushing from the cowboys and horses to get the swim started. However, once the front cows made the plunge, the whole group followed suit and the swim was completed with no cows or calves being lost. To ensure that the calves make it across safely, there are two or three boats in the water watching the calves closely and assisting those that are too tired or swimming in the wrong direction. This year about five calves were pulled from the water onto the boats, they completed their journey in luxury and were reunited with their moms at the holding pens. This drive is still considered the oldest cattle drive in Texas, but recently lost the title of longest cattle drive in Texas. Until a few years ago, the cattle were driven by horseback all the way to the pastures in Bay City. However, with the construction of a nearby bridge, it became too dangerous for the cattle and the community. So now after the cattle swim across the river, they are held in pens overnight so that cows and calves can pair up, then they are loaded into trailers the next day to complete the journey to Bay City.
This same process is completed in reverse order around Thanksgiving each year. And if you are wondering, this cattle swim can be viewed by the public. Groups of people gather at the Matagorda Bay Nature Park, which is managed by Lower Colorado River Authority, to watch this scene out of an old western movie. So if you’re in the area of the Matagorda Bay peninsula around Easter or Thanksgiving, make sure to bring your camera and enjoy this century-old tradition.
Now keep in mind, driving cattle is not the sole purpose at the Huebner Brothers ranch, it is only a piece of the puzzle. The ultimate goal of any ranch is to make money and grow superior cattle. Huebner Brothers is no different. Their goals are to produce heavy weight yearling steers and superior replacement females and the Beefmaster breed has allowed them to accomplish both goals: weight and maternal traits. 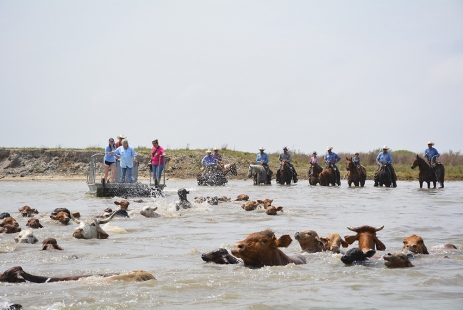 “Most of the weaning weights on these Beefmaster influenced calves are going to be between 650 and 700 pounds in the fall. We will wean a lot of these calves and hold on to them and ship them as yearlings in the spring. We try to get them up to 750 to 800 pounds as yearlings,” says Meyer.
In the past the ranch has used Charolais and Gelbvieh bulls on their cows, but the move over to Beefmaster bulls has been significant in improving the ranch’s ability to replace with their own heifers. According to Meyer, they wanted to get the Brahman influence back into their cattle and the Beefmaster breed has been beneficial in allowing them to accomplish that. This is a ranch rich with history and tradition, and Beefmaster cattle is their breed of choice.
Whether your cattle operation is just starting or you have been running cows for decades, Beefmaster cattle will produce you extremely fertile, functional and docile females that the beef industry needs to rebuild America’s cow herds. While also producing profitable and efficient feeder calves that deliver results in today’s volatile marketplace. Adding Beefmasters to your program will offer proven maternal traits, proven efficiency and proven heterosis. Just ask the Huebner Brothers Cattle Company.
For more information on Beefmaster cattle visit www.beefmasters.org.