Claim The Win In The Fly Control Battle 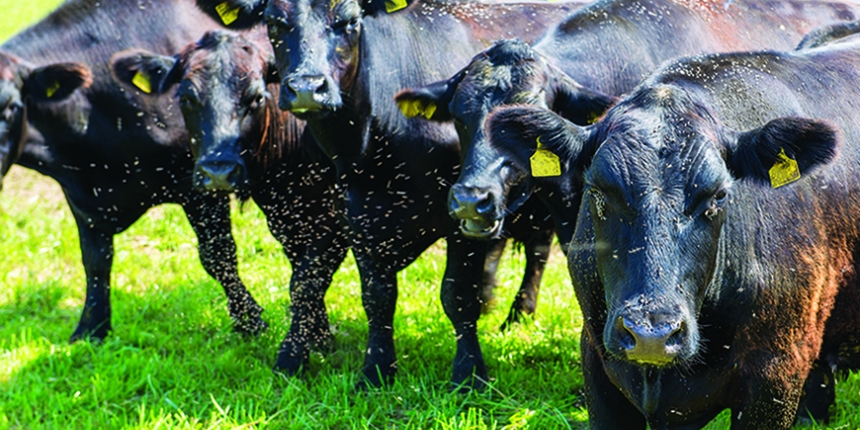 Claim The Win In The Fly Control Battle

An enemy of the cattle producer will once again be returning in hordes this summer intent on causing havoc and torturing livestock by inflicting suffering through blood loss, decreased grazing efficiency, reduced weight gains, health complications and declines in milk production.  Beyond this, it will attempt to cause mental sanity lapses in the humans it encounters.  Yes, this returning adversary is the fly in all its menacing darkness and multiple manifestations.

When facing this foe in the pastures, feedlots, barns and even stables, it is prudent for the producer to take up the fight with realism in mind.  Fly control in cattle is not about destroying and eliminating the enemy but using the right products and tactics such as insecticide armed ear tags and pro-active management processes to limit and reduce population numbers. 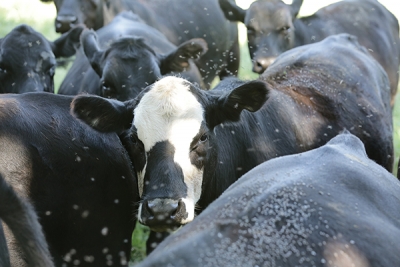 First, it is helpful to recognize the varied identities of the main culprits that use livestock as a host in their attempt at draining producer’s wallets- the horn, face and stable flies.
In most areas of cattle country, horn flies are the biggest threat.  These flies constantly cling to the cattle, bunching up in masses along the withers all the way down to the tail head and because of this, are most affected by defence methods such as insecticide laden ear tags.
Face flies feed on the secretions from the eye and nose areas causing tissue damage and opening up pathways for the Moraxella bacteria, a primary pathogen for contagious pinkeye.  These types of flies come and go thus insecticide impregnated ear tags offer only minimal results.
Stable flies will only land on the animals when seeking a blood meal and once satisfied will fly off to complete their life cycle.  They are not susceptible to ear tag insecticides but can be controlled via management actions.  Stable flies and their larvae are associated with waste and manure sites but rotating feed grounds and disrupting rest areas can spread out the sought-after residue and manure. “Disturb the habitat in some way,” Justin Talley, Oklahoma State University Extension livestock entomologist suggests.  “Research shows that 72% of the weight loss from stable flies is caused by the animal’s behavior — bunching — and 28% of weight loss is attributed to the stable fly feeding.”
The main weapon cattle producers have against the horn and face fly is pyrethroid insecticide ear tags.  “Insecticidal ear tags came out more than 25 years ago and are still among the top choices for horn-fly control,” says Phil Kaufman, University of Florida veterinary entomologist. “When they [ear tags] first came out, they killed everything, and they’d last all summer long. Well, it only took horn flies in some parts of the country a couple of years to develop resistance.  So, we need to be a little smarter about this.”
Tags should not be used until horn fly numbers reach the economic threshold of 200 per animal but the problem is that the life cycle of the fly doesn’t often coincide with the work cycle of the cattleman.  While there is a cost to running your livestock through a squeeze an extra time or two to apply fly control, there is also a cost associated with not using the product in a correct and timely fashion.  To get optimal protection, the insecticide tags need to be applied at the proper time and removed as soon as fly levels increase.  “Ear tags release the insecticide at an effective level for quite a while, but then the level drops off fairly quickly,” Kaufman says. “It’s when you are in that drop-off period that you are allowing for more of those partially resistant individuals to survive.”
Still effective to some degree as a fly control alternative are back rubbers, oilers and dust bags charged with a topical insecticide, usually pyrethroids.  If possible, erect an entryway near a water or mineral source, where cattle are forced to pass through.
Although, there are no “one size fits all” cures when it comes to defending against the fly enemy, there are options that can work.  Remember the producer doesn’t need to win the war outright, just emerge victorious in some of the skirmishes and battles by reducing and controlling the menacing horde all the while supporting and maintaining the optimal health of the herd.

How a horn-fly control program built around...

Buzz Off! By Michael Cox for American...