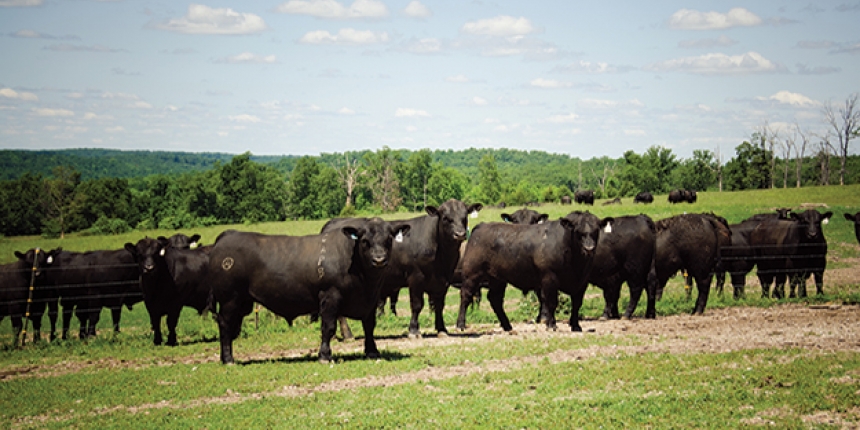 Circle A Angus Experience. Reputation. Profitability. Service. Since its inception, over two decades ago, Circle A Angus has focused tirelessly on improving the profitability of high-quality beef genetics. In 1991 Dave Gust and his family purchased 600 acres in Iberia, Missouri. Today, Circle A spans over 25,000 acres in three Missouri locations, runs nearly 7,000 cows and operates a 5,000 head feeding operation.
The headquarters in Iberia is the home of their 750 head Registered Angus operation. The registered herd aggressively uses artificial insemination and embryo transfer to rapidly multiply elite Angus genetics, while Iberia’s commercial operations evolve around developing nearly 2,000 black and black-white-face, bred heifers annually. This is also the home of Circle A’s massive bull development program and the sight of all of Circle A sales. In the mid 1990s Circle A expanded their operations to include Circle A West in Stockton, Missouri and Circle A North in Huntsville, Missouri. Each of these ranches encompasses nearly 8,000 acres and care for 2,500 mother cows.

In its early beginnings, Circle A was a typical registered operation from an outsider’s perspective. They built their herd through buying and selling top genetics and placed emphasis on showing cattle. While achieving success in the showring, it was quickly evident to the Gust family that showing and trading elite Angus genetics was often a zero sum game. So, they set their sights on being a bigger part of the beef industry by producing high-quality beef genetics that are profitable in a commercial production environment.

Seeking a more objective measurement system for the profitability of beef cattle in 1995, Circle A founded the Angus Sire Alliance in conjunction with 51 Angus breeders from across the United States. Members of the Alliance could nominate a bull to be tested in Circle A’s sizable commercial cowherd. Progeny comparisons were made for feedlot and carcass traits and Circle A’s huge performance and a carcass database was created. It soon became evident that feed intake information, the most critical component of profitability measurement, was lacking. So, in 1998 Circle A constructed a barn equipped with a Calan gate individual feed intake measuring system. Today, Circle A continues that research through use of a GrowSafe system, which can collect individual feed intake data on 200 head simultaneously.

With the addition of feed intake measurement, the Angus Sire Alliance began making huge strides to quantify profitability differences by sire. By 2003, the world’s largest semen distributor, ABS Global, formed an exclusive testing partnership with Circle A through the Angus Sire Alliance. The work done with the Angus Sire Alliance left Circle A with a non-registered Angus cowherd backed by decades of AI sires, pedigree information and performance data. This huge database was put to use by calculating their own in-herd Expected Progeny Differences (EPDs). Not only did they calculate EPDs for the basic growth and carcass traits, they took their quest for profitability to new levels. They were the first to develop EPDs for heifer pregnancy, cow stayability and tenderness in the Angus breed.

Circle A uses these EPDs to calculate terminal and maternal profitability indexes on their entire herd which assists in mating and selection decisions. The use of these indexes has allowed Circle A to make multi-trait genetics improvement in the factors that most affect profitability in a real-world commercial environment. Mark Akin, General Manager of Circle A, says collecting this data in a commercial setting is vitally important. “We provide our cattle with the environment in which we expect them to perform and then let nature sort them out. We run our commercial cows at about 500 cows per man. We simply don’t have the time or manpower to treat cattle on an individual basis. So, if a cow has a bad eye, udder, foot, or temperament we will assist her, but she goes down the road at the next opportunity. Over time we’ve developed a cowherd that can do more with less. They are expected to breed, wean a respectable calf and be relatively problem free.” Circle A believes that their structured and disciplined production system better helps their genetics adapt and perform in their customer’s operations as well.

After over a decade of collecting feedlot and carcass data and retaining ownership on cattle in feedyards in Kansas and Nebraska, Circle A decided they wanted to take advantage of their value added genetics and finish their cattle for themselves. “We knew we wanted to build a feedlot in Missouri and we knew what environmental challenges that entailed,” explained Akin. “Missouri can be hot and humid in the summer, cold and windy in the winter and muddy in-between.” Therefore, Circle A decided to feed their cattle under roof. Circle A Feeders, located at Circle A North in Huntsville, Missouri, is a 5000 head feedlot under one roof, and is a licensed feedlot partner of Certified Angus Beef.

The barn itself is a concrete and steel structure spanning 2800 feet by 120 feet, containing 54 pens. The cattle are bedded on dry sawdust, which not only absorbs moisture and odor, but after use provides a great replacement to commercial fertilizer on their entire North ranch operation.

Above every pen is an 18 foot fan to provide cooling and fresh air flow, and fly control is handled through the use of a predator wasp. Their goal is to keep fresh feed in front of the animals by feeding twice daily and making adjustments as needed. Fresh water is pumped into each pen from nearly fresh-water lakes. “It’s our goal to make the feeding environment as stress-free as possible,” explains Feedlot Manager Rick Beard. “If the cattle are comfortable they gain better. It’s not uncommon to see 90% of a pen laying down and peacefully chewing their cud.”

“Circle A Feeders has really become a model for what animal feeding operations could be,” says Nick Hammett, Circle A’s Marketing Manager. “We give many tours here every year, from cattlemen’s groups and international visitors to students and politicians. They are always amazed by the lack of smell, due to the sawdust, the comfort and quietness of the cattle and the size of the building.” Circle A Feeders has developed an environmentally-friendly, neighbor-friendly, animal-friendly way of producing beef.
In its first two years of operation, Circle A Feeders was awarded CAB’s Quality Focus Award and set a record for the highest percent qualifying for Certified Angus Beef, proving that Circle A’s cattle not only perform in the pasture, they also excel in the feedyard and on the rail. Circle A’s cattle will consistently gain nearly 4 pounds daily with a feed conversion approaching 5 pounds of feed per pound of gain. “Our cattle have been bred to gain and do so efficiently,” says Hammett. “We’ve been collecting individual feed intake data for over 15 years and using that in our selection indexes and we’re still seeing improvement. Customers using our genetics are always pleasantly surprised when they put their calves on feed.”

On the carcass side, Circle A genetics are definitely in the upper echelons as they typically grade over 97% Choice and Prime and around 50% quality for Certified Angus Beef. Owner Dave Gust explains, “ ‘Quality Beef is Our Business’ has been our motto since our inception. The high quality grades are not by chance, it’s been our design from day one. The hard part is not to produce cattle that grade well, it is to do it profitability and still produce females that can perform in the pasture in a real-world setting.” Aside from being exceptional quality, Circle A’s carcasses generally hang a carcass weighing just over 850 pounds, have a ribeye area between 13 and 14 inches and average a yield grade of 3.2. “We know we produce a great product and have a great story with a unique production environment, our ultimate goal is to find a partner to help us more directly market our product. I would love to be able to go somewhere and see the Circle A brand on a package or menu.”

Circle A currently offers their genetics in two sales annually the third Saturday’s of March and October. “We currently offer around 400 bulls and 600 bred-heifers annually,” says Hammett. “Having two sales a year allows us to offer a bull with a little more age, generally 18-22 months old. We try exceptionally hard to grow these bulls at a proper rate so that they are ready to go to work and are athletic, but not fat.” In an effort to provide added value to their customers, the bred-heifers are sorted by fetal sex. Buyers are afforded the opportunity to purchase as few as five heifers and have them sorted by both due date and fetal sex. Anytime the buyer gets the bid they can take consecutive lots from the same group at the same price. It’s not uncommon to have a buyer, or two, take 50-100 head at a sale. For the last few years Circle A has also offered black-baldy females at their sales and they have been really popular with their customers.

Over the years Circle A has sold cattle to 23 states from California to Florida and North Dakota to Texas. “We really feel that the real-world setting in which we make our cattle perform makes them highly adaptable to a wide variety of environments. Our local climate has extremes on both ends and running on fescue grass can be difficult. We really feel that if we make our cattle thrive here, they will do well just about anywhere,” says Akin.

Circle A helps distribute their cattle by offering free delivery on two or more bulls anywhere in the lower 48. Their sales are also available for live bidding online at liveauctions.tv.

Our goals are simple says Hammett, “We’re continually striving to improve the profitability of high-quality beef cattle production and share our experience, and knowledge with our customers. We raise and sell cattle like we want to put in our 7,000 cow operation and treat people the way we want to be treated. You can’t get much more honest and straight-forward than that.”