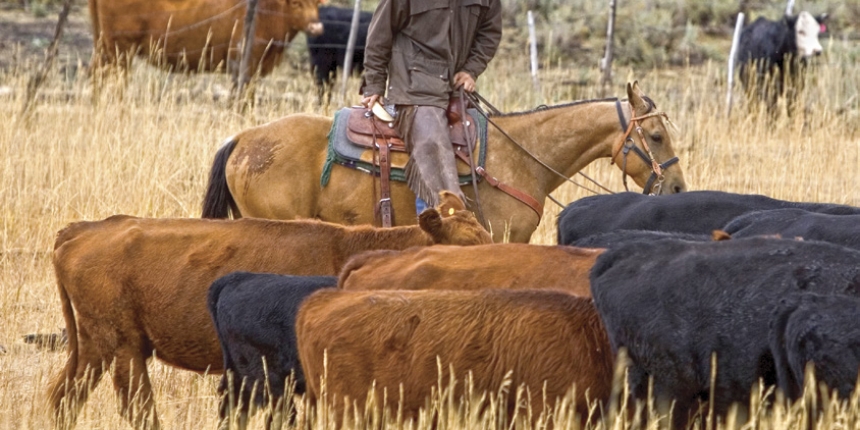 Safe and effective cattle handling has always been important. In the last few years there has been a move toward what has been called low-stress handling or as we prefer to call it a return to sound, effective stockmanship. The animal industries must not tolerate any form of abusive behavior or handling of livestock. The culture of handling on any operation originates from upper management and is expressed by the workers on the ground.

Most cattle handlers — and it does not matter if you are a cowboy, cowgirl, buckaroo, cow hand, cow man, farm hand or stockman — have learned by watching someone else work stock. Everyone thinks they know how to “work cattle” because they have always been able to get the job done. The moment you admit you do not know everything is the starting point for improving handling skills.

If you have had a thought similar to “that stupid ol’ cow” you have room to improve your abilities as a stockman. Cattle are not stupid and usually do what they are asked to do. However if asked incorrectly, cattle will likely not respond as intended. When this happens we have come to rely on facilities, equipment or manpower to force them to do what is needed. This results in increased stress on cattle and handlers and results in cattle becoming more difficult to handle.

In a very simple explanation of stress: If you decide to do something it is not stressful; if you are forced to do something it will be stressful. Sound stockmanship involves convincing an animal the intended movement is their idea.  Force is avoided and stress is reduced.  The job of a stockman is to teach an animal to tolerate pressure and stress for short periods of time. Effective stockmanship skills are based on pressure and release. An animal will quickly learn to tolerate pressure and not develop stress if they perceive a way for pressure to be released.

to the desired result. When cattle lose movement they become reluctant to work. When movement is lost, excessive

pressure, force and driving aids are more likely to be used. Creating and managing movement is key to achieving effective stockmanship.

There are five basic principles of cattle behavior that when used properly can improve the ease and speed of working cattle while reducing stress and increasing efficiency.

Understanding their vision is fundamental to handler positioning and cattle response. Cattle have excellent peripheral vision with the exceptions of blind spots directly behind them (large) and in front of them (small). When working from behind and to keep cattle from turning, it is important to stay in their sight by moving from side to side.

2. CATTLE WANT TO GO AROUND YOU.

This allows you to position yourself such that, when they do go around you, they are pointed directly at the intended gate or destination. They’ll think it was their idea to go there!

3. CATTLE WANT TO BE WITH AND WILL GO TO OTHER CATTLE.

A herding instinct is natural among ‘prey’ animals. As stockmen we can take advantage of this natural instinct as we work from the front of cattle. Start the front — the back will follow.

4. CATTLE WANT TO RETURN TO WHERE THEY HAVE BEEN.

The natural instinct of a cow is to return to the last known safe or comfortable place. The simple principle of the return box or “Bud Box” takes advantage of this instinct. Low-stress handlers use this to their advantage when sorting and moving cattle from one corral to another.

5. CATTLE CAN ONLY PROCESS ONE MAIN THOUGHT AT A TIME.

If cattle are thinking about anything other than what you are asking them to do, change their focus before putting pressure on them.

THE KEY IS COMMUNICATION

There are three basic means of communicating with livestock. Very simply they are:

Cattle prefer to communicate through line of sight.  Human noise is usually stressful and marginally successful in getting the desired result. Sound should be used as a secondary method and only used when sight is not adequate.

Distracting sounds shift their focus away from the desired direction. Touch is really only useful in situations where animals are confined and additional stimulus is needed to get cattle to move or respond. Effective touch does not include the use of driving aids such as hotshots or sorting sticks or paddles.

Keeping these behavioral principles and methods of communicating in mind, following is a list of ten handling pointers to keep in mind and a few suggestions that will improve the ease of handling cattle, whether they are being gathered from the pasture or processed through the corrals.

1. “THE ONLY WAY TO WORK CATTLE QUICKLY IS SLOWLY.”

(from a humorous book entitled Don’t Squat With Your Spurs On) Patience is a great virtue when gathering and working cattle. When we get in a hurry, inevitably we put excessive or incorrect pressure on cattle, which usually results in an unintended reaction from the cattle.

2. WORK FROM THE FRONT TO DRAW CATTLE TO YOU.

This goes back to the basic principle #1. Cattle can be easily controlled from the front if they are not afraid of a human. (If they are afraid you are a long way from being from the front maintains their focus on the intended direction of movement. By moving in and out of the flight zone and across the point of balance, cattle can be easily drawn forward and past the handler. The most important point to remember about the flight zone is not the zone, it is the area immediately outside the flight zone. Stockmen must learn to anticipate, read and manage this ‘boundary’ area. When approaching an animal it is important to predict the response to your invading the flight zone. If the desired movement is not going to occur, the handler should retreat, reposition and return from a different angle.

Point of balance falls varies greatly among animals and is influenced by pressure from front or behind, draw of cattle ahead, push of cattle behind and whether or not they are comfortable going by the handler. The point of balance is actually related to handler position relative to the animal’s eye.

3. APPLY PRESSURE WHEN CATTLE HAVE A PLACE TO GO.

Low stress livestock handling is not about handling cattle without pressure. In fact the success of handling cattle correctly depends on knowing when and where to apply pressure and how much pressure to apply. The other key component to effective stockmanship is setting the cattle up to go where you want them to go before you apply pressure. Equally important is the release of pressure as soon as the desired result is achieved.

4. PRESSURE FROM THE SIDE.

This relates back to working from the front and down the side of an animal and not working from directly behind (in their largest blind spot).

5. CATTLE MUST BE COMFORTABLE TO GO BY YOU AND STAY STRAIGHT.

If cattle are not comfortable going by you, they will not work for you very well. Working from the front requires cattle to be comfortable passing by without balking or spooking. This simple principle facilitates penning, sorting and processing cattle. As point of balance moves forward (with training), moving, sorting and working cattle gets easier. Thus using the draw of other cattle makes it easier to work and sort cattle in an alley or from one corral to another.

6. PRESSURE CATTLE FROM BEHIND ONLY WHEN ABSOLUTELY NECESSARY.

Like any ‘prey’ animal, cattle cannot see directly behind. If you assume a position directly behind cattle (in their blind spot), they will turn to one side or the other in order to see you. To ‘drive’ cattle in a straight line, assume a position behind their point of balance (shoulder) and off to either side. You can also work in a zig-zag fashion behind the cattle causing them to switch eyes and move straight forward.

7. WHEN WORKING CATTLE, MOVE IN TRIANGLES.

Sounds odd, but it works. Move in straight lines. For example, if you work in an arch pattern behind the cattle, you will find them being drawn from side to side (and consequently walking in a zig-zag pattern) as they follow your movement. Move into their flight zone to create or correct movement. Retreat from their flight zone to slow or stop movement.

8. GOING WITH THE FLOW OF CATTLE SLOWS THEM DOWN OR STOPS THEIR MOVEMENT.

It’s all about that point of balance — as you move in the same direction cattle are traveling, when you approach a position parallel to their point of balance, they will slow down, and as you pass the point of balance they will stop. The important part in this process is to get the cattle to stop without reversing their direction. Teach them to stop and stay pointed in the direction they were headed.

9. GOING AGAINST THE FLOW OF CATTLE INITIATES OR ACCELERATES THEIR MOVEMENT.

The opposite of pointer #8. Ever filled the chute, then pressured the last animal in line to move the others forward? It’s likely they had no place to go, became stressed and yet nothing happened. Next time, try leaving their flight zone, walk up ahead of the line, then re-enter the flight zone of the first in line and walk alongside the chute, front to back, and see what happens. We suspect that as you pass their point of balance, they will step forward. The one in the front will ‘pull’ the others forward.

10. CATTLE WORK BEST WHEN THEY ARE READY – YOU HAVE TO GET THEM THERE.

Cattle are not mind readers. You have to teach, condition and prepare them. Unfortunately, today’s cattle owners are short on time and experienced labor, and consequently, don’t spend time with their cattle as did the stockmen of days gone by. Perhaps there’s not time to educate the entire existing herd, but quality time spent with replacement heifers will pay dividends for years to come. Spend time with heifers (in both the pasture and the pens) when you want to, not just when you have to.

Numerous others will handle your cattle after they have left your care. Bad habits and unruly behavior in cattle and humans is learned. Shouting, whistling, poking and prodding cattle is unnecessary and counterproductive. In fact, they distract cattle from the intended movement. Development of effective stockmanship skills improves worker safety, animal performance and potentially increases income on each individual operation.

We encourage you to improve your skills as a stockman. For more information and additional training opportunities go to: www.ranchtv.org or www.effectivestockmanship.com