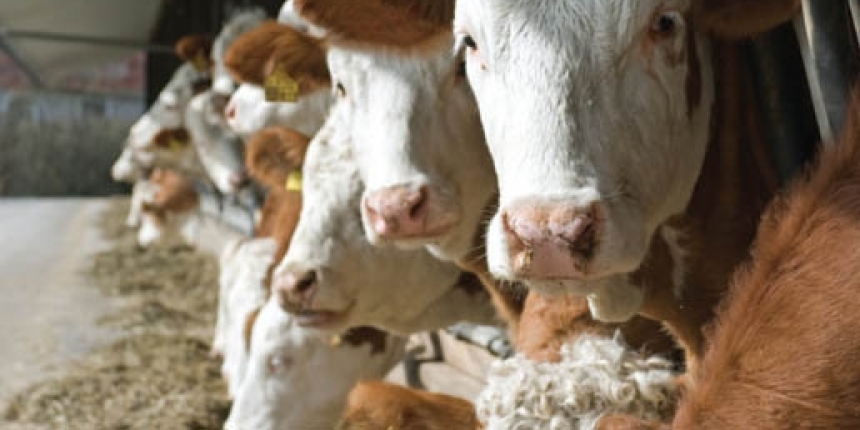 Suppose you gathered up exactly one hundred cow-calf producers representing a true cross-section of the commercial industry. And just suppose you asked all among the crowd who currently use artificial insemination in their operations to raise their hands. It’s likely there would be no more than eight hands waving in the air. There would be even fewer if you asked how many producers were practicing AI on mature cows. The simple fact is that most commercial producers shy away from AI. Of those that do use AI, most use it only for breeding replacement heifers.

“I think, as an industry, we have made people think that AI is very difficult,” says Herb Holzapfel, of Willow, California. “I happen to be living proof that it is not.”


Holzapfel is a veteran of AI, who introduced the technology to his commercial operation more than 30 years ago. Like a lot of producers, he started by artificially breeding replacement heifers. But for a lot of years now, AI has been applied to mature cows as well.

Holzapfel says many people seem to think success with AI depends on having fancy facilities. But he and his wife, Ginger, have bred heifers and cows in a variety of situations, including very simple facilities fashioned from portable panels.

“Facilities can be whatever you have on the ranch. Any chute set-up that you are presently using can be made to work for an AI program,” states Holzapfel. “We still breed in what I would call plain ol’ commercial ranch facilities.”

Anderson Land and Cattle Company has been using synchronized AI nearly as long as Holzapfel. Clay Anderson, his brother, Jason, and their mother, Gayle, share in the management of the operation near Oberlin, Kansas. Anderson says many of their neighbors perceive AI as requiring too much time and labor. Granted, cattle have to be put through the chute a few times for estrus synchronization and insemination. It does take planning to schedule the work and do it right. But Anderson says modern synchronization protocols for timed AI can dramatically reduce the time devoted to heat detection. He thinks devoting a few days to careful implementation of AI pays ample dividends.

“Synchronized AI means more cows are bred on the first heat cycle. So more calves are born early and they’re closer in age,” says Anderson. “Certainly, the calves are sired by better bulls than we could afford to own and use naturally. With AI, we access some of the best-proven genetics available, using a $40,000 or $50,000 sire, at a cost of about $20 per calf. AI consistently delivers above average returns on the cattle we market, and we’re improving our cow herd faster with the AI-sired replacement females we keep.”

Among cattle finished in the Andersons’ own feedlot and marketed in 2008, 84 percent achieved a Choice carcass quality grade –a far cry from the 46 percent of the mid 1970s. In just the last four years, the number of Yield Grade 4 carcasses has been reduced by 10 percent. Yield Grade 1 carcasses are up by 10 percent and the number qualifying for Yield Grade 2 increased by 16 percent. Anderson credits these improvements to sire selection based on the high-accuracy EPD (expected progeny difference) values of AI sires, and a focus on improving carcass merit while maintaining the herd’s strong maternal traits.

Anderson and Holzapfel believe more commercial producers could make AI work. Whether they sell feeder cattle like Holzapfel, or retain ownership through the feedlot like Anderson, AI provides opportunity to improve the value of cattle marketed. Of course, the true measure of success with AI would be increased net return from the cow-calf enterprise. Tim Sutphin, who operates Hillwinds Farm, near Dublin, Virginia, says net return is the one measure he seeks to maximize.
“I believe some of the best ways to increase net return is through estrous synchronization, artificial insemination and retained ownership through slaughter,” says Sutphin. “These things, in combination, have made a big difference in our bottom line.”

Since 1999, Sutphin has applied synchronized AI on a whole herd basis. All cows are inseminated on day one of the breeding season, after which clean-up bulls are turned into the pasture. Sutphin has put his pencil to it and found that AI does cost more than natural service. His figures show the cost of one-time AI, including semen, synchronization protocol, and other costs, is about $39 per pregnant cow. That’s assuming a 65% conception rate with AI. According to Sutphin’s calculations, using a $2,800 bull for four years, and assuming a 90 percent conception rate, puts the cost of natural service at about $33 per pregnant cow. That makes the cost of AI $6 per pregnant cow higher.

However, Sutphin cites a two percent improvement in pregnancy rate since implementing AI, with more calves born early in the calving season. Typically, pregnancy rates range from 95 to 97.5 percent, with 85 to 90 percent of calves born in the first 30 days of a 65-day calving period.

In Sutphin’s experience, there is less dystocia among cows bred AI. He credits the difference to the higher accuracy of birth weight and calving ease EPDs for the AI sires, compared to unproven bulls used naturally. Sutphin’s older AI-sired calves also appear to have more resistance to pneumonia and scours. From birth through harvest, treatment costs and death losses are lower for AI-sired calves.

Also credited to the use of proven genetics is the increased feed yard performance and carcass merit of AI-sired calves. Sutphin has even looked at how saving AI-sired replacement females has influenced the value of marketed animals and improved net return to the operation.

“The value of our calves has improved with increasing AI influence,” states Sutphin. “If we compare a calf that is AI-sired and out an AI-sired cow, with a calf that is sired by a clean-up bull and a non-AI-sired cow, the difference in the end value is as much as $175. That’s worth the little bit extra that it costs to AI.”

Many of those producers also retain ownership of calves all the way to harvest. It has been said that producers who market fed cattle have a better chance of earning premium prices reflected by genetics available through AI. Herb Holzapfel believes calf-sellers also can claim rewards for cattle with “added value” associated with more uniform age
and weight and genetics known for performance and quality.

“Our steers consistently sell above the average market price and our heifers are sought-after,” says Holzapfel. “I believe if you are going to be in the ranching business in the future, your very existence will depend on your ability to supply a better, more consistent product. I don’t know of a better way than with AI.”

Everywhere you turn there is another good reason...

The 8 Most Common Genetic Mistakes

Enzyme technology is a hot topic in livestock...