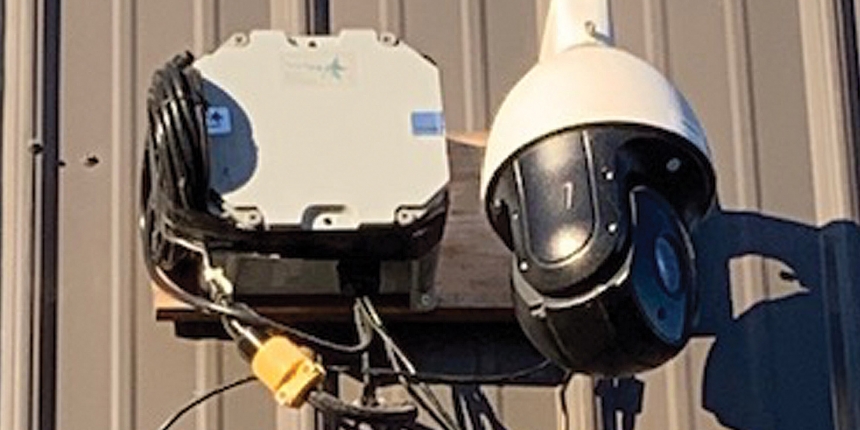 Joe Van Newkirk, whose family has raised Hereford seedstock near Oshkosh, Nebraska for several generations, says it is important to monitor calving cows and heifers but it helps if you can do it without disrupting them.  “We constructed our calving facilities—where we calve our heifers—to be very low stress when a heifer is in there.  We use cameras in the barn and the five pens inside.  If a heifer is in labor or has a water bag out, we can put her in the barn and watch her without having to go inside.  The cameras are hooked up to the internet; we can look at them with our cell phones wherever we might be, or on our television in the house,” he says.  No one has to go into the barn to check on the heifer and disturb her.

“The pictures are very clear, even in total darkness.  You can see if the calf is coming correctly or if there’s a problem.  You are not bothering the heifer and she doesn’t get worried and delay her calving,” he explains.

“Most of our heifers calve at night, and we usually leave them in those pens with the cameras.  Those cameras are hooked up to a DVR, so we can rewind and look at the videos, to make sure the calf actually got up and sucked, before we turn the pair out.”

Being able to let heifers calve without stressing them is helpful.  “Our heifers are gentle but when they have that first calf it’s a totally new experience for them.  They don’t know what to think, but mother nature kicks in and usually everything goes smoothly; probably 99% of the time it all goes well, but we want to make sure we could be there if we’re needed.  Often we are watching, on the phone, right outside the barn, just in case the heifer calves and the sac is still over the nose.  Then we can slip in and take care of it.”

Josh and Maggie Malson are part of a family ranch (Malson Angus & Herefords) near Parma, Idaho, raising registered cattle. Maggie and her daughters also raise sheep. A few years ago they purchased barn cameras to help monitor activity in the barn during calving and lambing.

“Originally we bought the cameras for monitoring ewes during lambing,” Maggie said. “The first year, I was getting up every two hours to go to the barn to check on them.  Even though our barn is not very far away, I had to get up, get dressed and drive to the barn. I wasn’t getting much sleep!”  The next year she installed barn cameras, to be able to view the images on her phone.

“All I had to do was wake up and check the cameras on my phone instead of going down to the barn, unless there was a reason,” she explains.

“When we had the ‘snowmageddon’ in 2017 we had to put cows in the barn to calve. Usually our cattle calve out at pasture, but that year the weather was so bad—with so much snow—we put many of them in the barn.   We could check on them with the cameras. Having the cameras has proven to be a really great management tool for both the lambing and calving,” Maggie says.

“We don’t put cows in the barn very often as they prefer being outside, but any time we have anything in the barn, we can check without disturbing them. The two cameras are set up through a phone app, and can be shared with our oldest daughter. She can check on them when she is at school or anywhere else,” Maggie explains.

These cameras are mounted on different walls, and rotate so their direction can be changed with her phone and she can also zoom in on a certain view for a closer look.

“The cameras also have a microphone and sound,” Maggie says. “I can hear the sheep if one of them is bleating like she’s about to lamb or if a cow is calving and gently mooing, we would hear that too.”

It’s handy to see things you might miss otherwise, like a calf coming backward. “Using the app on my phone, I can zoom in on something like that and get a closer view, and have a better idea about whether we need to rush out there,” Maggie said.

Many companies today sell cameras and people can shop around to see what might best fit their certain needs.

“We bought Foscam cameras and ordered them through Amazon.  These are more of a home security camera. Some companies make barn camera systems, but ours were affordable and gave us something to start with and try out before investing in a bigger system. These have worked really well because I can zoom in on any view, move it around to look different directions in the barn, and have sound with it. If a person isn’t sure they want to make a big investment, they could start with something inexpensive like this, to see how the cameras work and what they might need if they want something different later. It may also depend on where you plan to put them. These are designed for indoors; they wouldn’t withstand wet weather,” she explains.

“Some friends of ours have theirs outside the barn (for checking pens outside) but those cameras are covered. They can be mounted on the barn or on a pole, with a protective cover over the top,” Maggie said.

“Ours are connected to wi-fi, and can also be hard-wired. They need internet connection to send the images to our phones. Some people have a tv in their house where images can be viewed, but we just have them on our phones,” she explains.

Carmen and Gerry Ogilvie have a commercial cow-calf operation near Meadow Lake, Saskatchewan, with 200 cows.  They start calving mid-February, and weather can be quite cold.  “It’s just the two of us, but we have a grown son who helps during calving,” says Carmen.

They got their first camera nine years ago.  “We started with just one outdoor camera with a hand-held zoom we control from inside the house with a joy stick.  The camera has infrared imaging which helps at night.  We did have to light up our pens a little better, adding spotlight type yard lights that shine out quite a ways.  This provides better lighting than the typical yard-light at the end of the barn.”    This enables them to see to the far end of the pen.

“The outdoor camera helps us catch any cow that might surprise us, so we are less apt to lose a calf in cold weather.  A person might have checked two hours earlier and she wasn’t calving, or maybe she was really quick or was hiding, or not showing signs when we looked at her.  That’s the main reason we got the camera, and we chose the outdoor one at first, thinking that was all we needed,” Carmen says.

The next year, they added a camera in the barn.  The outdoor camera has a 25-power zoom and the smaller one inside the barn, has a 10-power zoom.  “We put that in one of our barns, so if we have a cow in the barn we can watch her from the house and not have to keep going out there,” she says.

“The outdoor camera is great and now we’d never want to be without it, but the barn camera is the one that has saved us a lot of time.  We’re not going out there so often and opening the door and disrupting the calving cows.  Every time you open the door the cows are on high alert and look around to see what’s going on, and they may get up and delay calving.  It’s better to not disturb them, if possible,” she explains.

The outdoor camera is mounted at the highest peak of the nearby barn.  “We can see over top of most of the cows, most of the time.  Some people have their camera set on a pole so it can swivel around for a 360-degree view, but ours has the barn behind it so the view is only 180 degrees.  For us, it covers the area we need to see,” she says.

The ones in the barns are mounted on a wall.  “We try to put them in a central spot, but some cows still tend to lie down in an area that’s hard to see!  Once we get the camera pointed at a certain cow we usually leave it alone, because they can hear it move.  Then they look at it and it may distract them!”  Cows are very alert and extra sensitive when they are calving.

Jim and Kirsten Wright, near Meadow Lake, Saskatchewan, have registered Red Angus and a few registered Black Angus. “We’ve had our camera system for four years. A camera with a range of 360 degrees inside our barn, which gives us a full view of the barn, and the same type of camera outside  with night vision,” Jim says.

“We have three groups in front of our barn when we start calving--the bred heifers ready for their first calves, the two-year olds having their second calves, and mature cows.  We can see everything going on in that yard and the camera has enough range that we can see everything down to our bull yard,” he explains.

“This is the only way that both of us work off farm and still calve out the cows.  Our farm is only 20 minutes from town, so if I need to run home I can.  If there’s a cow calving outside in the middle of the day and I see her on the camera, I can be home by the time it is born, and the calf won’t have to be outside in the cold very long.  I check the image on my phone regularly.”  And if a cow is having a problem she will usually be a bit longer than normal in labor and he can get there in time to assist.

“We have our own tv in the house for the cameras, in our living room.  We’ll sit there and watch a cow calve and start wondering if she is taking too long or having trouble, so we’ve had to learn patience!”  It’s about the same as sitting out in the barn watching a cow calve, but it’s nice to be able to do it in a warm living room.