BRITESPAN Building Systems: Living the Dream (one step at a time) 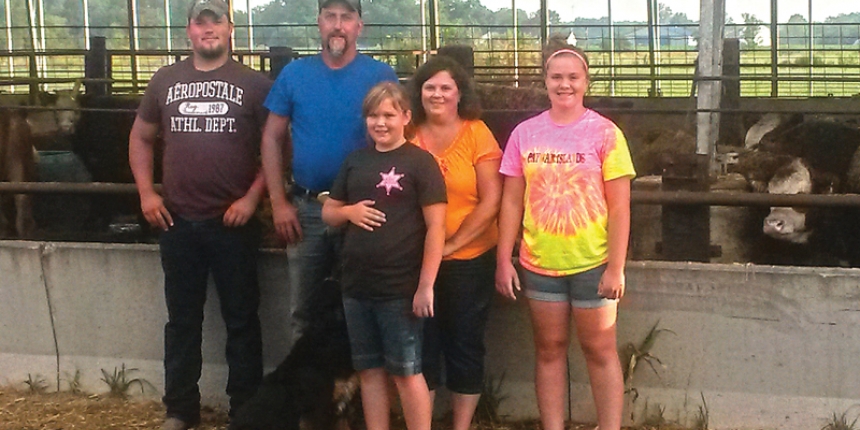 For 46-year-old Brian Weidner cattle producer and farmer near rural Newton, Illinois, he is living the dream of his childhood. “As a kid, I was always plowing in the sandbox,” Weidner says with a chuckle. “My dad always had livestock, and all I ever wanted to do was raise cattle and be a grain farmer.”

To live that dream, though, Weidner had to make a lot of sacrifices, and success came one small step at a time. “I worked for my dad and a lot of other farmers growing up, and I knew what I wanted to do.” Weidner started from scratch and actually worked nights at a local factory to help build his farming operation. His first purchase was a 40-acre parcel of pretty rough ground back in 1996. To make things work, he spent several years feeding hogs for Cargill Pork, while he continued to do factory work at night. However, it was always with a goal in mind: to own and build a commercial cowherd and plant and harvest small grain.
It took nearly 16 years, but finally in 2012, Weidner said goodbye to the hog industry and began to build his own red Angus cowherd. “It didn’t all come at once, and I bought small tracts of land a little at a time.” Now in 2014, Weidner runs a 120-cow/calf herd, owns 400 acres of his own, along with renting about the same number of acres. Although not a big operator by today’s standards, Weidner is proud of the niche he and his wife, Michelle, along with three children, have carved out. The Weidner farm has slowly expanded based on the premise of diversifying to survive. Weidner recalls what his father often told him as a child. “Don’t put all of your eggs in one basket.”
Weidner’s diversifying means not only running the cow/calf herd, but also raising 200 acres of corn, 250 acres of soybeans, 120 acres of wheat and another 200 acres of pasture. Except for buying supplements for the cattle and some distiller’s grain from the local ethanol plant, Weidner’s operation is pretty much self-sufficient. Even with his 200 acres of pasture, Weidner has worked to ensure that his cattle will always have a good pasture.
“I actually have divided the 200 acres into a series of 10-acre paddocks. It works out that the cattle are in a paddock for 4-5 days, and then it’s time to move on to the next one. It’s kind of funny, the cattle seem to know when it is time to move on to the next paddock and ‘sound the horn’ that it’s time to move on.” As the cattle move through the series of paddocks, the previously grazed paddock gets the chance to grow back.
As they reach the end of the series, the first set is ready again. As always, Weidner notes it is important to adjust to the way Mother Nature dictates what the weather is like and will be like in the future. “This whole system gives us the chance to better utilize the pastures, and the rotation helps keep the pasture consistent.” At the same time, this rotation also gives Weidner the opportunity to harvest hay off of the paddocks.
With the cow/calf operation continuing to grow, Weidner has found the need to add more shelters. “The cowherd outgrew their current shelters, so in 2012, I made the decision to erect another shelter. I looked at a lot of choices, but after researching the many types, I always kept coming back to the BRITESPAN series. I started planning in September and by February, construction was completed.”
Weidner chose to go with a 52' x 210' BRITESPAN Atlas series building used for growing/finishing cattle. These fabric-covered buildings are made up of pre-engineered steel trusses with an extremely durable polyethylene cover that typically lasts 25+ years. Inside, there is a feed bunk on one side, 14' scrape alley, bedpack in the back, 5' eave over the feedbunk, 4' eave on the other side, along with some storage in the building and automatic waters.
Weidner has found a lot of positives over the past two years. “The lighting is good. Even on cloudy days and up until it starts to get dark, there is plenty of lightning.”
Proper ventilation is extremely important with the heat of summer and cold of winter. BRITESPAN buildings provide the ventilation to help offset these temperature extremes.
Although the building is only two years old, Weidner is impressed with the durability of the Atlas series. “Everything I read was positive. The company has a good track record; the building is built to last. I worked with Kevin Woods, sales representative for Effingham Animal Health Company, and everything went very smooth. It didn’t take long to put up. The building is so efficient, but at the same time, the concept is so simple.”
The Atlas series has worked so well that Weidner is now exploring the idea of adding another BRITESPAN structure. “I would use this one more as a storage building.”
As Weidner weighs this decision, he says the Weidner operation is truly about the entire family. From his wife Michelle to his three children, the family believes in the Weidner Farm. “Jordan just graduated, Macie is 13 and Jayden is 9, and they all are a part of 4-H. Jordan had a lot of success last year, when he took second in state competition with his Record Book of Beef Placement.
As for the future, the goal is for the Weidner family to continue living the dream that Brian envisioned as a child: to raise cattle and be a grain farmer.

US – Leaders from the US division of Intervet/...

Rebuilding our industry from rock bottom

Are we living in a state of crisis? We must ask...

Manure Handling Systems - Many Options. By...
view all articles