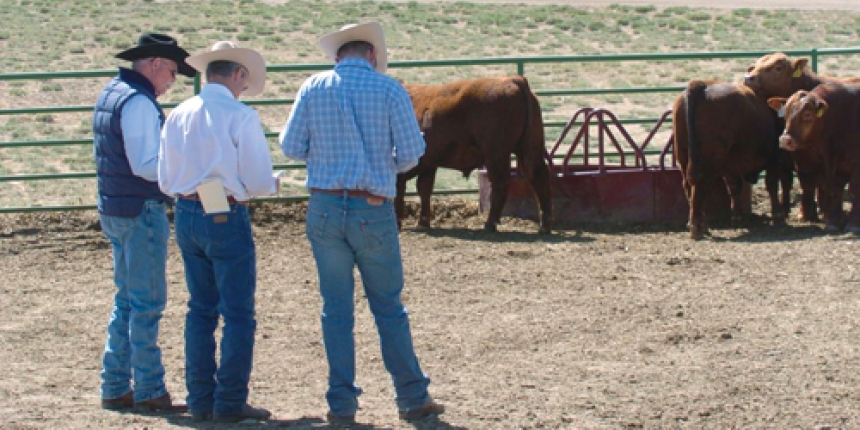 Leachman has selected bulls for feed efficiency and $Profit and then progeny tested the bulls to prove that the Leachman-generated EPDs accurately predict steer performance in the feedlot. Resolution is progeny proven to be high feed efficiency and high $Profit.

Can anyone really look at a cow or a bull and tell you if it will enhance the profitability of your cow herd? No, that’s why the industry has been performance testing cattle for almost 50 years. Performance testing in the early days was simply getting a birth weight, weaning weight, and yearling weight. Then sometime in the ’70s, breeders and researchers started going deeper and developed Expected Progeny Differences (EPDs), which changed everything.

The breed associations were all on board and started taking simple measurements and calculating the EPDs and then later came ultrasound, and now we’ve progressed to DNA data. The last we counted, the American Angus Association (AAA) was publishing roughly 28 different EPDs. When breeders realized that they had an overwhelming amount of data, AAA started producing EPDs that were a combination of traits, to try and make cattle selection easier for commercial producers, such as Dollar Beef Values, which combined growth and carcass yield and marbling traits into one index. They added economics to the EPD’s to calculate indexes.  One often needs scientific credentials to utilize all the data currently produced by breed associations.

One progressive breeder in Colorado has been working to simplify the data for their customers. Lee Leachman operates Leachman Cattle of Colorado and is what one might call a data junkie. Leachman has collected data on their cattle and their cooperating producers’ cattle for 30 years and has lived by the numbers, constantly looking for better ways to use the data and simplify the data for their own selection purposes and their customers.

Leachman said it all started back in 2006 when Dallas Horton, Leachman’s then partner in the operation, asked him to come up with one number that sorted the bulls on their bottom line impact—so they did. “Since then, we have provided a $Profit index on all bulls we sell. Furthermore, we are basing almost all of our own selection decisions on our proprietary $Profit index. Literally, we are putting our money where our mouth is,” Leachman said.

The model also assumes a producer has 3/4 Angus cows, that 30 percent of the heifers will be kept, and that a producer will retain ownership and sell the calves on a grid. “We realize that many customers don’t retain ownership, but it still makes sense to select for the animals that make the most money from birth to slaughter,” Leachman said.

Leachman said there is no special black box to his index. “Everything we use is off the shelf; the difference is our guys at Biobeef and the Centre for Genetic Improvement of Livestock in Canada. They are really good at making the calculations and their model is good at predicting how EPDs affect real world performance,” he said.

Leachman set up several commercial progeny test herds to validate the $Profit system in commercial conditions on both the ranch and in the feedlot. “We’re very confident that the $Profit predicts financial results in commercial herds. It has so much value that we use it for our own genetic improvement and sire selection,” he said.

“We believe that appetite is a lifelong trait, so we have measured feed intake on over 11,000 animals,” he explained.  Appetite is a big factor in cow economics, according to Leachman. Dr. Cliff Lamb at the University of Florida has a “Growsafe” system at their research station. “They put a group of heifers in it and figured how much they ate. Then four years later, they brought the same group of cows back in, which were lactating, and found the big eaters were still eating a lot and the small eaters were still eating dramatically less. Yearling heifer feed intake was 65 percent correlated to mature cow feed intake. This means it is essentially the same trait.  We are now selecting for cows that eat less,” Leachman said.

“One of our customers, Rod Cook from Maybell, CO, has been buying composite bulls from us sight unseen for years. His last set of steers went into the feedlot at 700 pounds, finished at 1470 pounds, converted feed on a dry matter basis of 5.4-1 and produced a 930-pound carcass. Those calves were born in May and were processed on July 18th and graded 67 percent choice in just 14 months (implants and bata-agonists were used). The cows that produced those steers weighed just 1,175 pounds. So we’re getting that moderate type cow that has the ability to produce offspring that will keep on performing to the top of the carcass weight range,” he added.

$Profit can be a real game changer, according to Leachman. “The technology will predict whether or not a group of calves are good performers and worth taking the feedlot risk. If a producer uses a good bull, they can hedge their cattle at a loss and make it up in feeding performance, which takes a lot of risk out of the business. Most commercial feedlots will tell you that the spread in performance is bigger than the spread in the price of the cattle. This says feeders pay too much for the bad cattle and not enough for the good cattle.

When a producer can identify the top feeder cattle at weaning, cattle feeders will look for them and pay more for them. These ranchers that can see the value in producing top feeder cattle will want to go out and get the genetic that will enable them to produce them, and get paid for them. And with $Profit index they will still be making their cows better. Everybody wins with the $Profit; the cow/calf guy produces better performing calves while improving his cow herd. The feeder gets better performing cattle, and the packers get better quality beef.”

By Pete Crow (reprinted by permission from the Western Livestock Journal).  pete@wlj.net