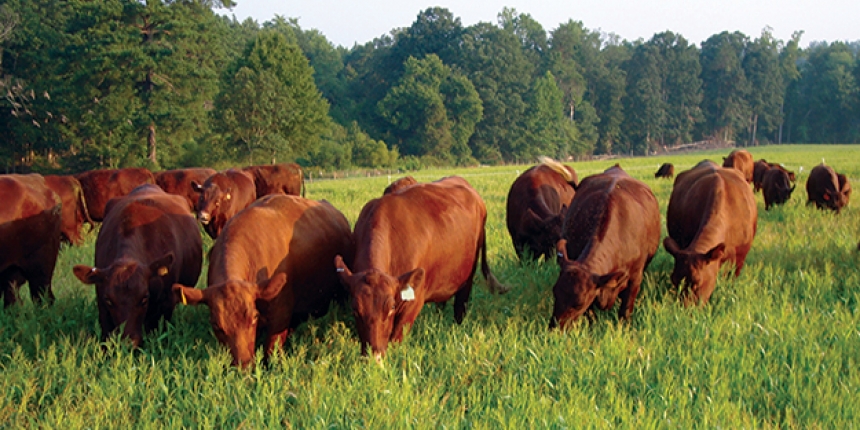 Until now, the Red Poll breed has been the industry’s best-kept secret. Now we are ready to share that secret with you. According to Dr. Keith Gregory, long-time USDA Researcher at the U.S. Meat Animal Research Center, “I feel the Red Poll breed is one of the most underutilized breeds in the country. Our research has shown the contributions this breed can make to crossbreeding programs. Red Polls excel in early puberty, with our studies showing they had the highest percentage of conception at a younger age of puberty. This breed also has optimum milk production and makes for an ideal cross.”

Red Polls have been waiting to move to the forefront of the cattle industry, and now is the time. These cattle were developed in England and recognized as a breed in 1846. They were originally designed to be dual-purpose milk-and-meat producers. In the early 1900s many Red Poll breeders in the U.S. would take half of the calves, remove them so their dams could be milked, and foster those calves onto another cow that was already nursing her own calf. One-half of the herd could then be milked and the other half of the cows would raise the calves from the milking herd as well as their own. During the 1950s and 1960s, the breed went through a period of transition — moving from being a dual-purpose breed to being a single-purpose, beef breed. The transition was considered complete when, in 1972, the breed was officially declared a beef breed.

Hardy and beautiful, the Red Poll provides great beef value. Crossing Red Polls to other breeds gives the calf crop hybrid vigor and puts more milk into the new generation. The breed excels in virtually all characteristics sought by the today’s beef producer. Red Poll cows are gentle and known for their longevity in production. It is not uncommon to find foundation cows that are producing well past 15 years of age. As good mothers, they produce extremely rich (high protein and fat) milk. Bulls are easy handling, yet fertile and aggressive breeders. Red Poll bulls generally weigh 1,800 to 2,200 pounds and cows 1,100 to 1,400 pounds. Their gentleness makes them an excellent choice for family farms, rotational grazing and other systems where ease of handling is valued.

Chefs and consumers recognize that the Red Poll Beef has an exquisite and unique flavor. Highlights from SAVEUR 100, Chef’s Edition as shown on the NBC Today Show, Editor-In-Chief Oseland James stated that Red Poll is “truly my favorite beef.” As one of the Top Food Trends for 2011, the industry has identified the fine-grained texture, good marbling, and natural tenderness that is entrenched in Red Polls. Andrea Reusing of Lantern restaurant in Chapel Hill, NC recommended the “heritage, grass-fed Red Poll Beef” for this television segment.

Although they are perfect for small homestead and grass-finished operations, the Red Poll also has plenty to offer to the commercial cattleman as well. Their moderate size, efficient production, and high fertility make their genetics especially valuable in a crossbreeding program on the maternal side. They are an excellent choice for rotational grazing and other systems where ease of handling is required. The milk is high in protein and buttermilk. These cows are ideal for small-scale and home dairy production including milk and cheese sales.