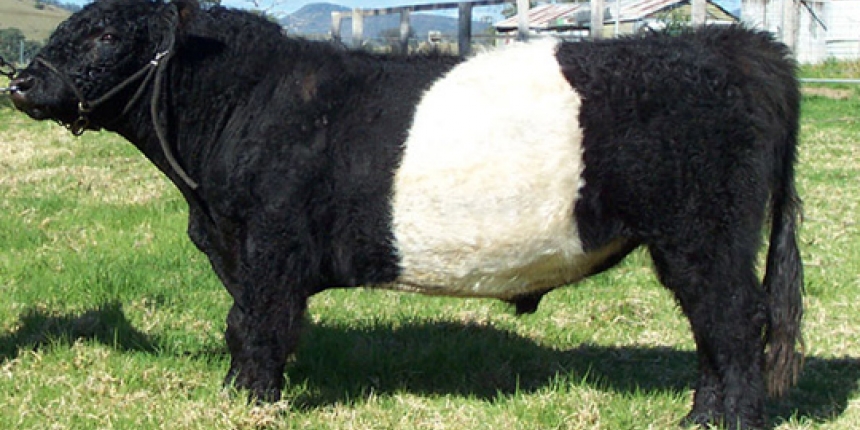 Rich in history, Galloways originated in Britain before 1570, came to North America in 1853 and came to America in 1866. The American Galloway Breeders’ Association (AGBA) was organized in 1882 and in 1906 Galloways were one of four breeds that started the National Western Stock Show in Denver.

Coat colors are the popular Black, Dun (silver through brown), Red, Belted (black, dun or red, with a white band around the middle) and White (with black, dun or red points). At five centuries, full blood Galloways are the oldest and purest British cattle breed in existence today. Volume I in the Belted Galloway herd book relates the white belt to an infusion of Dutch Belted blood in the seventeenth or eighteenth century. Full blood, Belted and White Galloways register in one of three sections in the herd book for the AGBA (http://americangalloway.com) whose registrar is the Canadian Livestock Records Corporation (http://www.clrc.ca). Regardless of coat color and history, all are Galloways with like benefits to the cattle industry.

Today, this breed presents with long hair that significantly reduces carcass fat whether the cattle are at the Canadian border or south Texas, Maine or California. Multiple hair layers insulate and protect these great cattle in snow and heat. These moderate framed cattle are generally very docile except when acting in concert and jointly attacking predators. Mature bulls weight range from 1,700 to 2,300 pounds with an average being 1,800 pounds. Mature cows weight range from 1,000 to 1,500 pounds with an average being 1,250 pounds. Calf birth weights average 75-80 pounds. From their origin these polled cattle have been bred for beef production. According to the AGBA, “Galloways will graze and browse a far broader variety of grasses, forbs, ‘weeds’ and brush than any other breed, hands down. When the neighbors’ cows think they have run out of edible pasture and have taken to bawling for a handout, Galloway cows will be rustling up a meal, even though the Forage Guide says what’s left in the pasture is worthless for cattle.”  Because Galloway breeders learned way back that it’s not always in the breeds best interest to chase every fad that rushes by, Galloway cattle offer breed purity for tremendous F1 hybrid vigor in the commercial cattle industry.

AGBA members and AGBA Youth show each October at the Northern International Livestock Exposition in Billings, Montana where the annual AGBA meeting is held and at the National Western Stock Show in Denver where annual Youth awards are presented. Look for Galloway cattle at these shows as well as countless county and state fairs. While granddaddy may have overlooked the value of these wooly looking cattle, in our modern cattle industry embracing and folding these easy keeping animals into our herds, whether large or small, will moderate frame score, reduce body fat and increase usable weight per hoof in calves finished on grass with or without grain.

The Highland breed has lived for centuries in the...

Several societies for improved breeding of the...