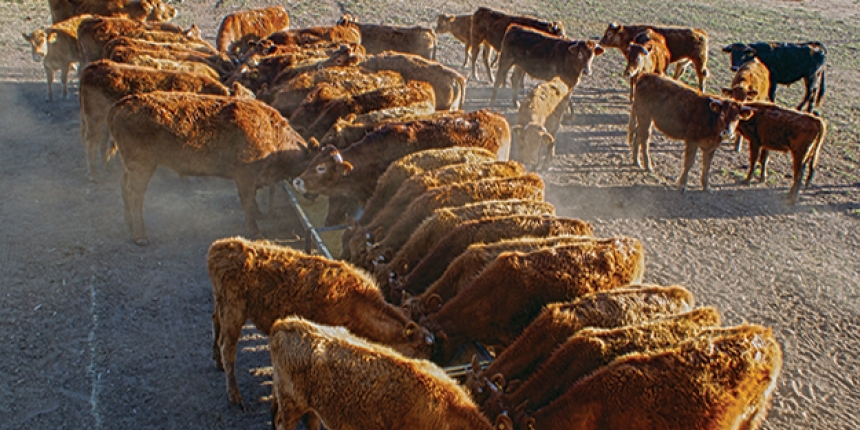 For beef cattle prices to continue their record run, the 2014 U.S. corn crop will have to produce record yields, according to a Texas A&M AgriLife Extension Service economist. That aside, the 2014 beef cattle market outlook is poised for another historic run as lack of supply will continue to fetch strong bids on calves.

“Look for continued high prices,” said Dr. David Anderson at the recent Central Texas Cow-Calf Clinic at the Milano Livestock Exchange. “Tight supplies are underpinning the market. I think we are going to have higher calf prices than we did in 2013 and higher prices in 2015 than we did in 2014.”
Fewer cows and calves will lead to less beef production over the next couple of years, Anderson said. Cattle on feed numbers as well as slaughter and beef production are down from levels a year ago, signaling less supply.

Anderson said the biggest threat to future high calf prices is feed prices. “If the nation’s corn crop comes up short, that could drive up prices putting downward bid prices on the calves,” he said. Fed cattle set new record prices the week the week of Jan. 1-3, 2014.

In 2013, Anderson said there were as many beef cows slaughtered for the year as there were in 2012, as a percentage of the herd. “We kept culling, which is why I think we will continue have tighter supplies going forward,” Anderson said. He predicts beef production to be down six percent for 2014 and another four percent for 2015. “I think we will have higher prices whether it is retail or cattle prices,” he said. “I don’t think we are there yet as far as herd expansion.”

The only concern ahead is the 2014 corn crop. Anderson said corn prices today “are darn near half of what they were in 2012. In 2013, the opposite happened. We had a record corn crop and corn prices went down, while calf prices took off. Going forward, to maintain these high calf prices we’ve got to have a record corn crop.”
Anderson said there will be fewer acres of corn planted this year as some farmers shift to soybeans to take advantage of potential price runs. Demand will also remain strong for beef despite record-high beef prices.
“The question I get all of the time is when are we going to quit eating beef in reaction to record-high beef prices?” he said. “It hasn’t happened yet. We’ve had record prices for months and months, and I think they are going to continue to go up. We’ve seen a shift in the kind of beef we eat, but haven’t seen people giving up their hamburgers for pork or chicken. We continue to have slowly growing beef demand with a slowly growing economy. We could see it pick up for beef demand as the economy grows in the latter half of 2014. If you put tighter supplies with growing demand, I think we will be talking about higher prices in the years ahead.”

For now, Anderson said there has been a tendency for packers to overpay for cattle, which continues to pressure bids for feeder cattle as there are fewer to be sold. That’s led to imbalances and packers losing money as the competition heats up to purchase a shrinking inventory.

Breed Profile: Beefmaster Breeders United The Best of Both Worlds

Cattle prices are up and cattlemen are overall...