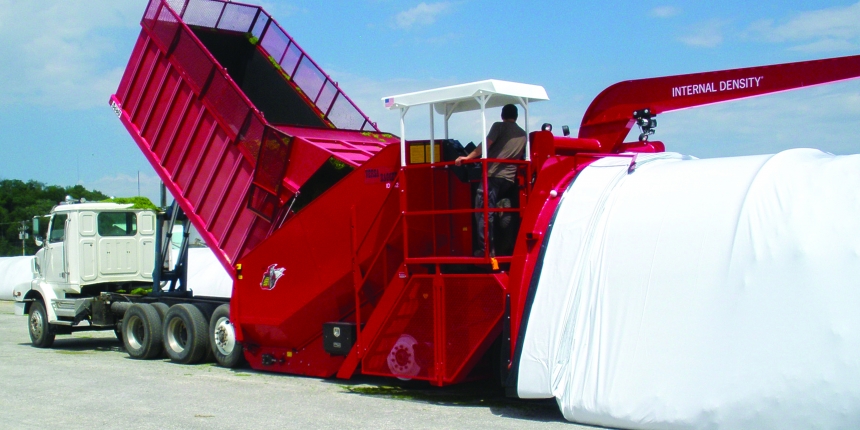 To bag or not to bag? That is the inherent question many farmers and ranchers ask when determining the best method to use when preserving feed for their dairy or cattle herds. The ensiling process is an essential part of feed preservation in areas where year-round production and harvest is not feasible. And although, for decades, conventional silos and bunkers have been used to store feed, more farmers are turning their attention to bagged feed options that require less equipment, less labor, less risk, more rapid, effective fermentation, and feed produced with better stability, quality, and less shrinkage.

William Prokop, DVM and director of operations at Cornell University Ruminant Center, explains how critical to the production of well-fermented feeds, is the rapid exclusion of oxygen from the feed to promote anaerobic production of lactic and acetic acids, to preserve and stabilize the feed.

"Conventional bunker silos and drive-over piles require the use of tractors to push the feed into the storage area, and other tractors to drive over the feed continuously in order to squeeze the air out of the feed and promote an anaerobic condition," Prokop says. "Associated with this process is the risk of equipment collisions, and rollovers, as the piles or bunks get taller."

Bagged forage does not involve packing or push tractors, but rather achieves an anaerobic state by the nature of how the feed is forced under pressure into the bag.

"Consequently the bagger, under the control of one operator, is doing the work of a push tractor and several packing tractors — each having its own operator — with far less risk," Prokop says. "One piece of equipment and one operator, versus three or more tractors, each with its own operator."

As a veterinarian, and nutritionist, as well as being the director of the country's premier dairy research facilities, the Cornell University Ruminant Center, Prokop finds application of Versa Corporation's bagging technology to be a highly effective solution to helping Cornell achieve an inventory of well-fermented, high-quality feed to support the health and productivity of their herd.

"If one's goal is the safe and efficient production of a higher quality, more consistent feed — then, with Versa, 'it's in the bag,'" Prokop says.

Versa Corporation has an extensive line of Versa Bagger models for all operation sizes as well as other products for handling, hauling and processing feed. Versa, with its patented, innovative silage bagging technology, ensures the latest bagging methods and uses for its customers. The company is known for making the best-packed bags on earth and now accounts for the most tons of silage bagged in the world.

Todd Helder, owner of Helder's Forage Storage in Hopkins, Michigan, understands that the important attributes of feed for dairy and beef cattle is to promote health and productivity — therefore feed quality and consistency is vital. And Helder is not alone in his understanding. More and more farmers and ranchers are embracing Versa Corporation's leading- edge silage bagging patented technology.

Helder has been bagging for more than thirty years; initially on his own farm using a machine for side unload wagons. He began using Versa Baggers in 2001.

"In 1999 we set up a separate business to do custom bagging," Helder says. "We now run 18 self-propelled Versa machines, all for custom work, as we have no cows of our own."

With the Versa Baggers, Helder and his company services dairies from 200 to 10,000 cows.

"One of the biggest things we hear is how good the feed is when it is pulled out of the bag. It smells nice and has a cool feel to it and the cows like it," Helder says.

Another advantage for Helder's customers is that the feed is completely stored once it's in the bag. For example, if you have eight days' worth of chopping to get all of the hay up for one cutting and you get rain on day three, then a pile would be open to that oxygen for the two days until you can chop again.

"Feed in a bag is done being stored that night when you turn off the key," Helder says. "The feed does go through a cooler fermentation process in the bag due to the limited oxygen. This preserves the feed value of it. These higher-end feeds allows a owner to purchase less additives to get the energy and protein they want in their ration, allowing for a cheaper ration."

Indeed, as Prokop explains, assuring consistency when ensiling feed in bunks or piles is much more problematic, then using a bag, by the very nature of the feed being exposed to a more oxygen-limited environment in the bag immediately, as opposed to several hours where tractor compaction is needed. 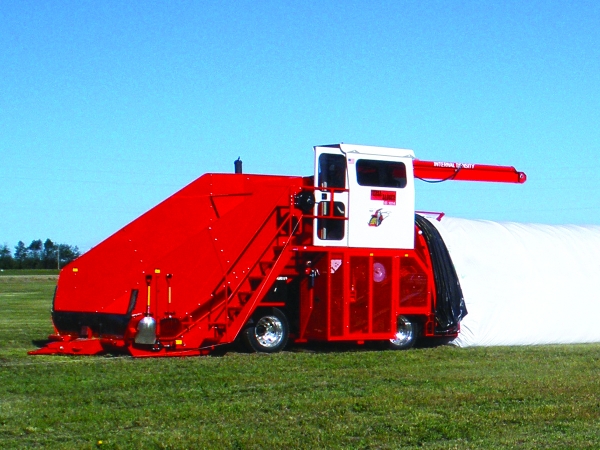 "Furthermore, inadequate exclusion of air resulting from poor packing — not enough tractors with adequate weight, or inadequate time allowed for packing — can result in less than optimal fermentations with excess feed loss and the production of spoilage products in the feed," Prokop says.

According to Helder, by having feed in bags, it is beneficial to be able to keep the feeds separate until they are fed. A feed ration can then pull feed from a first cut hay bag that has good fiber and a fourth cut hay bag that may have high protein to have their ration where they want it to be.

Numerous times Helder and his team have
bagged feed at a farm that isn't even built yet.
"We have done all the cuttings of hay during a season for operations that were in the process of still being built," Helder says. "That feed could sit there and wait for the farm to be built and be ready to feed when the cows show up. A current production facility that wants to grow in cow numbers can also easily expand their feed storage by just putting up one or two more bags than the previous year. They don't have to lay out another big investment for another silo or bunker."

"When we start to bag for a farm, we will typically do all their cuttings of hay," Helder says. "After two years, the farmer will really notice how much extra feed they are starting to accumulate. They are feeding less pounds of hay a day to get the same nutrition, and are losing less to waste. They realize they can now reduce their hay acreage or sell excess hay. Versa has a slogan that goes something like this, 'You paid to plant it, you paid to fertilize it, and you paid to harvest it. Now don't lose it to poor storage conditions.'"

That feed is a huge asset that can depreciate quickly if you don't take care of it." Like Helder's Forage Storage, LaFollette Enterprises, has been custom-harvesting silage with the help of Versa Baggers for decades, chopping around 400,000 tons of silage per year, with 60 to 65 percent of that feed being bagged.

Bunker or piled silage ultimately requires covering with large sheets of plastics, which in turn need to be secured and weighted down with nets, sand, or more typically sidewalls from used tires.

"This incurs a tremendous amount of labor, as well as the risk of injury as tall bunks and piles put workers at the risk of slipping and falling," Prokop says. "This is not only a common sense management concern, but is also an impending OSHA violation, if suitable safety harnessing or netting was not used to prevent injury."

Tony Alamo, owner of Alamo Farms in Crows Landing, California, sees bagged feed as being put up at dryer moisture, which allows for less runoff. Alamo has been bagging his feed since 1988. "Bagging allows us to put up feed based on variety, field, quality or any other attribute that we feel warrants separation. Also, we are able to test each bag before we feed it and plug it into rations accordingly."

For Alamo, bagging allows his farm to put up the feed where they harvest it, where they feed it or anywhere in between.

"I believe bagging is a savings of a minimum of 10 percent of our feed compared to a silage pit," Alamo says. By the very nature of a bag, a farmer also is able to segregate different crops and/or hybrids by field for purposes of more strategic feeding and better inventory control. And, by the very nature of the bag and how fields are delivered to it, there may be more variation in feed attributes, such as dry matter, or nutrient analysis since the face of the bag is small compared to the cross section of a bunk.

"And with bags only a small face is open to the air and the feed is always fresh coming off the end of the bag," LaFollette says. "On a traditional pile, there is always some spoilage on the top and sides. This has to be removed to protect animal health. Bags properly done have no spoilage to be removed, thus less labor and better animal health."

Of course, in the world of preserving feed and animal management, consistency is key. Just ask Paul Staehely, owner of Valley View Guernsey Farm in Oregon City, Oregon, and who has been bagging his feed since 1975.

"We have better constancy in the quality of our feed," Staehely says. "We are able to mark our bags, helping us to better track which field and cuttings are in which bag."

This is helping Staehely to identify the feed and gives him the ability to work with their nutritionist, making a ration for his animals that best suits them.

"The more consistent we can stay with our feed, the better the overall health of our animals," Staehely says. "This results in better breeding and less feet issues. It also adds so much flexibility to feed storage. Our previous method of storage was an upright silo. There was limited storage and it's just not as good as bagging it."

Nutritional Management of the Calf After Weaning...

The recent boom in ethanol production is having...