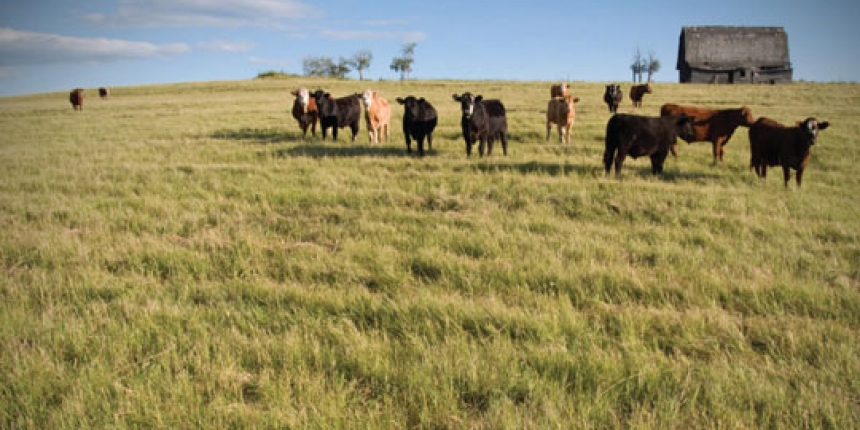 Beef heifers experience calving difficulty, or dystocia, more frequently than do mature cows. Dystocia is characterized by prolonged or difficult labor due to heavy birthweight and/or small pelvic area of the dam. Death of these calves, and sometimes their dams, is a result of injuries received during difficult delivery. This obviously reduces calf crop and potential profits. Cows that experience dystocia also have lower rebreeding rates than animals that have normal, unassisted deliveries. Consequently, producers should make every effort to avoid dystocia.

Causes of Dystocia. There are a number of factors that influence dystocia; fortunately most of them can be controlled through good management practices.

One factor is improper selection and development of replacement heifers. Small, underdeveloped heifers generally have a higher incidence of dystocia than properly developed heifers because they have smaller pelvic openings. Select heifers that are heaviest, and feed them to ensure proper growth (1.5 to 1.75 pounds of gain per day). At this rate of growth, the heifers should weigh betwen 65 and 70 percent of their expected mature weight by 14 months of age (first breeding). Gain during gestation should average about 1 pound per day, provided that this allows for enough fat cover, or body condition, at the time of calving.

Much research has been done to determine the effect of feed level prior to calving on the incidence of dystocia. From this research one can conclude that feed levels during gestation do not influence dystocia as much as we once thought. Excess energy during gestation is not as much of a problem as excess protein. The latter increases birthweight of the calf and the incidence of calving difficulty. Therefore, pay particular attention to the amount of protein fed to heifers during gestation. The best experiments in this subject show the need to feed a balanced ration that affords proper growth as described above. If pregnant heifers are on winter pastures (wheat, oats, ryegrass, clovers), limit grazing to 30 minutes per day rather than grazing full time. This helps avoid excess protein in the diet and its associated increase in the offspring's birthweight. In other research, efforts were made to starve dystocia out of heifers through feed restriction. The assumption in these trials was that less feed would reduce birthweight and, thus, dystocia. These efforts were futile, and this practice is not recommended since it will reduce the body condition of heifers at calving time, which is proven to reduce subsequent rebreeding rates.

As cows mature and their pelvic openings grow larger, the incidence of dystocia decreases. Knowing this, many producers calve their heifers first at 3 years of age rather than at 2 years. This helps, but never totally eliminates dystocia. Furthermore, calving heifers first at 3 years of age is not recommended because it increases the costs of production per individual animal and can reduce their total lifetime productivity.

Improper calf posture (breech, head or hoof turned back) during delivery can cause problems, but this can be corrected simply by giving assistance at birth. We know that calf posture can change, even during the early stages of delivery. The reasons for this are undetermined, and we during delivery.

It is a common belief that exercising the dam during gestation can reduce dystocia. But an experiment in which heifers were forced to move and travel during gestation revealed that no advantage was gained through exercise.

The main cause of calving problems is heavy birthweight. As birthweight increases, so does the degree and intensity of dystocia, especially when heifers also have small pelvic openings.

• Sex of the calf (bull calves are heavier)

• Nutrition level of the dam during gestation

• The genetic influence on birthweight by the sire

Obviously, sex of the calf can not be easily controlled. Methods of doing this are currently being developed, but only for the purpose of offering the cattleman the choice of gender in his calf crop in order to increase his marketing options. Nutrition level of the dam during gestation can be controlled, but efforts to reduce dystocia through excessive nutritional restriction have been futile. The most prudent and effective way to reduce birthweight is to use a bull that is known to sire calves with light birthweights. Mating this type of bull to properly developed heifers has, in many experiments, almost entirely eliminated calving problems except those associated with improper calf posture.

Some breeds have gained the reputation of being difficult calvers while others have not. This is unfortunate and unjustified because within every breed there are “easy calving” and “hard calving” bulls. Some of the breeds that have been intensively selected for growth without regard for calving ease have a higher proportion of bulls that can be characterized as hard calvers. This does not imply that these breeds no longer have any easy calving bulls, and it is unwarranted to classify any breed as hard or easy calving. Admittedly, crossing bulls of a breed with light mature weights to females of a breed with heavy mature weights may reduce the incidence of dystocia. But on the other hand, random mating of those same bulls to females of the same breed may or may not influence dystocia. Therein lies the problem. What can be done to find a sire, within any breed, that is an easy calver? The solution is to use a good set of progeny records for that breed. This kind of record program is essential to finding the easy calving bulls, and a number of breed associations have adopted these procedures.

This makes it easier for the bull buyer to find the correct bull.

When dealing with breeds that do not utilize performance records, it is very difficult to predict the performance of a sire for any trait. People who sell bulls should supply their buyers with performance data. This helps assure the buyer that he is getting the product he wants, and assures the seller of a repeat customer.

As a buyer, what evidence do you need to see? Look for records that show the expected progeny differences (EPDs) in birthweight for calves from the bull in question. Bulls with a low EPD (less than +5 pounds) for birthweight are the easier calving bulls in that particular breed. Most importantly, look at the bull’s calving ease score.  Acceptable scores are further evidence that the bull in question is an easy calver.

The best way to avoid calving problems is to choose the heaviest heifers as replacements, grow them to an acceptable weight and mate them to an easy calving bull. This approach will be successful in reducing dystocia except in those instances involving improper calf posture. Since the incidence of posture problems is low, dystocia attributed to excess birthweights and small pelvic openings can be almost entirely eliminated.