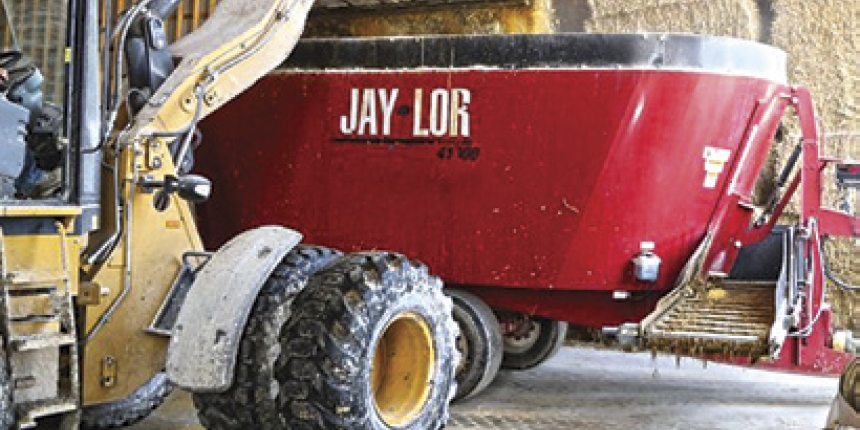 When this column started, we encouraged our readers to forward their comments, questions and suggestions for topics to us by email at the address given at the end of the column. We thank you for the communications received to date, to which we reply directly. Starting with this issue, we will occasionally share with you an expanded response that was inspired by a noteworthy question.

Q “How much whole stillage is too much when it comes to operational characteristics of the mixer/tractor . . . and performance of the cattle?”

A ADDING LIQUIDS TO A TMR MIXER: The ability to add liquids to a total mixed ration (TMR), as well as the method used, are functions of the type of mixer used, especially horizontal versus vertical mixers. Overall, the limit for any TMR mixer to use liquids will be based on either its ability to contain it, or the capacity of the feed to absorb it. I am not aware of any TMR mixer that cannot handle liquids (most all bearing and planetary gear systems are sealed against moisture), nor any feed ingredients that could react with or otherwise adversely affect the mixer surfaces (even silages are acidic) without also adversely affecting the cattle being fed. With horizontal mixers, liquids should generally be added first, or otherwise early in the loading phase, to ensure adequate distribution and mixing. As such, liquid use is primarily limited by the extent of the physical seal of the tub, including the height of the opening for discharge.

With vertical mixers, liquid ingredients should be added last, or at least after the majority of feed that is capable of absorbing the liquid has been loaded, and with the machine running at or near full mixing speed, to ensure optimal coverage of the feed particles. If liquids are added too early or too fast, they may leak through the edges of the door at the bottom of the mixer tub. It is also best that the liquids are distributed as widely as possible over the circulating feed, and to avoid situations where it can freely flow down the walls of the mixer, to ensure maximum coverage.

Excessive addition of some potentially sticky liquids, such as liquid whey or molasses, may build-up on the walls of the mixer, inhibit flow and create “dead spots” that will adversely affect mix uniformity and mixing time. In these cases, periodic cleaning with a pressure washer will be beneficial.

Vertical mixers have a surprising large capability to incorporate liquids into a TMR. For example, a high producing dairy farm I worked with produced a 50% dry matter (DM) TMR from dry alfalfa hay, barley grain and supplement by adding water to the final mix until the desired moisture content was reached, without leakage. A general rule of thumb for adding liquids to a vertical TMR mixer is to add the liquid during the final processing or mixing phase, at a rate that covers the entire period, and is sufficient to supply the amount of liquid required while being fully absorbed and avoid any leakage. Beyond this, the amount it is advisable to use should be based on the nutritional  characteristics of the ingredient and requirements and response of the animals being fed.

WHOLE STILLAGE: For those unfamiliar with whole stillage, it is what remains after the alcohol had been distilled (removed) from the fermentation “beer”, or mash, during the production of alcoholic beverages or fuel ethanol. These days it is common for whole stillage to be physically separated into wet distillers grains (WDG) and “thin stillage”, which in turn has water removed to create condensed distillers solubles. The WDG and condensed solubles can then be sold separately, or as a mixture (wet distillers grains with solubles, WDGS), for feeding to livestock nearby, or more often they are recombined, dried and then sold as dried distillers grains with solubles (DDGS) so they can be stored for longer periods and shipped greater distances. Whole stillage is thus likely the least common form of distillers byproduct available for feeding, but functionally it is essentially the same as WDGS with a very low dry matter (DM) content, usually less than 10%, and can thus be a challenge to feed in a TMR ration.

NUTRITIONAL CONSIDERATIONS: The first step in using these types of liquid ingredients in TMR rations is to determine if there are any nutritional or palatability concerns regarding the ingredient: In the case of whole stillage, researchers at the University of Nebraska, Lincoln have shown that growing and finishing cattle fed whole distillers byproducts (equivalent to whole stillage) at up to 40% of the diet DM actually gained faster and more efficiently than animals feed nutritionally equivalent diets based on dry rolled corn, a characteristic of feeding DDGS that is now well established.

Research at the University of Saskatchewan showed that replacing the drinking water of feedlot cattle with thin stillage with a DM content of up to 6.7 % increased feed efficiency without affecting average daily gain. These results confirm that the liquid nature of whole stillage, in and of itself, should not be a deterrent for feeding it to cattle.

Nevertheless, as with WDGS or DDGS, a recommended feeding limit could be reached due to the content of specific nutrients in whole stillage DM, specifically high levels of phosphorus and sulfur, as well as perhaps protein. Thus it is always recommended that appropriate inclusion rates for these types of ingredients be determined by a qualified nutritionist. Once a desired inclusion rate has been set, it is often best to introduce the new ingredient in increments to allow for adaptation and ensure there is no detrimental effect on intake. As long as both intake and performance increase with each increment, it is generally acceptable to move to a higher inclusion rate, and then move back one step if little or no benefit is seen. In this way, you can make the most of these type of cost effective ingredients when they are available — “Because Nutrition Matters.”

Dr. Alan Vaage is a Ruminant Nutritionist with over 30 years of experience in the beef industry, and currently provides technical support for Jaylor Fabricating Inc., Orton, Ontario. Dr. Vaage can be contacted by email: nutrition@jaylor.com.