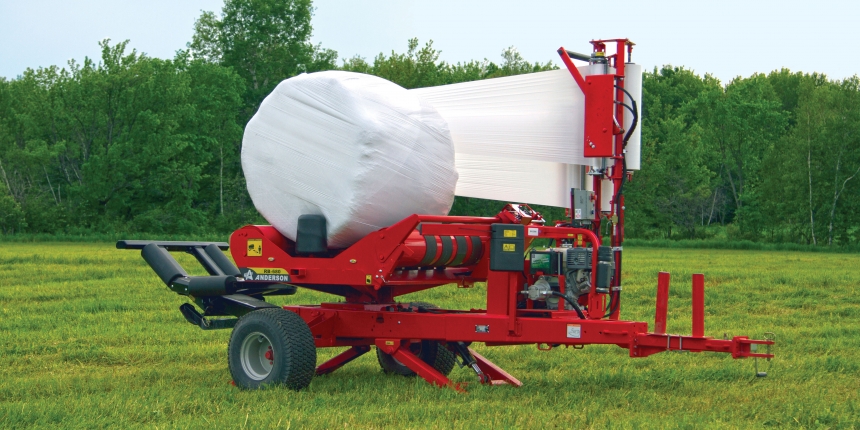 Since 1988, Anderson Group (www.grpanderson.com) has been meeting farmers’ needs by manufacturing agricultural equipment to facilitate hay storage. Revolving around the mission of simplicity, efficiency and reliability, Anderson Group has spent the past 27 years designing equipment that will offer new and efficient ways to better handle harvested hay. Today, with a dealer network of over 250 dealers in the United States, Anderson Group is changing the way farmers handle their hay storage.

There are lots of hay storage options out there, but Anderson Group has developed a system that gives producers the best product possible. Studies by Penn State University, Michigan State University and the United States Department of Agriculture show that whereas conventional hay storage losses can occur through inefficient field curing, harvesting loss, storage loss and lower feed consumption by the cattle, bale silage offers an optimum food source, little chance of spoilage, a longer life span than other hay storage options and a lower cost of completing the baleage process.

From Anderson Group’s self-loading bale carriers, to a series of single bale wrappers, inline bale wrappers, wraptors and grabbers for both round and square bales, the hay storage process becomes a simple and manageable process.
Ralph Peirick of T & R Dairy Farm believes in the baleage process using Anderson products. “We have been making baleage for 18 years. We love the fact that you can feed any crop of hay or cover crop or marsh grass whenever you want to. Cows really like the smell and taste of baleage over dry hay or haylage. This is the fourth year of using the Anderson Wraptor system. I just love the speed and labor savings that this system brings. Just load up the wagon with bales, drive up to the wrapper, and in five minutes, 14 bales are wrapped. I do not see any other system like that on the market.”

Meanwhile, Ernie Haehnel, a beef producer from Motley, Minnesota, notes, “Feeding baleage, my herd now has more daily weight gain. The quality of the feed helps reduce the cost of mineral and supplement. My herd maintains a better body condition score, and the cows are breeding back more easily.”

Johnny Harris and his son Paul operate Greenview Farms in Georgia. Since 1998, they only feed baleage to their cattle and feel it is the easiest and most productive way to go. Cattle are healthy, calves are stout and average daily gain is high. Johnny says, “With baleage, you feed fewer bales per head and get better results. In the end, it’s not about the volume of grass you get per acre; it’s about the pounds of nutrients per acre. While we do feed high roughage, low protein (9.5%) ration to develop the bulls and heifers, most of their diet is forage. By developing these cattle on forage they perform much better for our customers.”

Nancy Perreault, Sales and Marketing Coordinator, says each year Anderson Group plans a series of seminars across the country to help farmers learn more about baleage. “We want to educate farmers on the benefits of feeding baleage to their animals and how it can help lower their operation costs knowing that feed represents 2/3 of overall costs on the farm. With baleage, we are less dependent on the weather and can harvest quicker in fewer operations. If you want to know where the next baleage seminar will be held in your area, contact Anderson.”