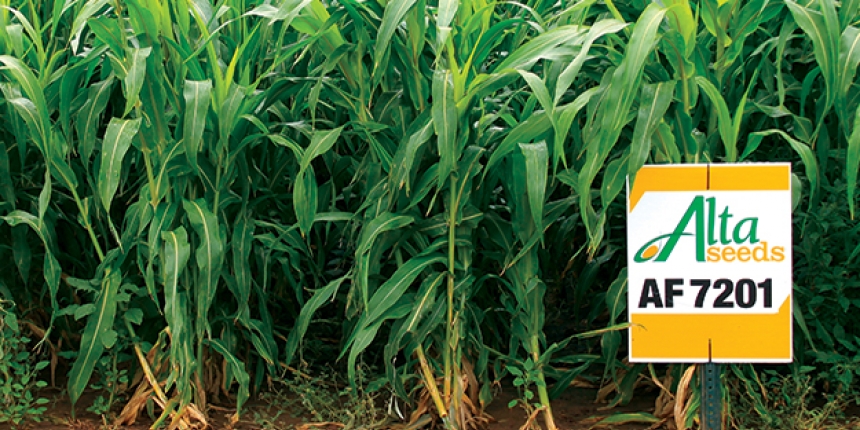 Cattlemen looking to improve their forage solutions are turning to forage sorghum because of its ability to produce high quality feed that is cost-effective and water-efficient. Sorghum is well suited to produce with limited water and high temperatures, so it’s a great fit for areas such as the High Plains. Traditionally corn silage has been the go-to crop for many cattlemen in this region, but, as wells have begun to run low and water restrictions have increased, forage sorghum has emerged as an excellent alternative.

“We’re in an area where water is limited and we just had to find something besides corn silage that we could grow that wasn’t so water intensive,” May says. “We are currently feeding 40,000 head of cattle so we like to keep a big pile of forage on hand for feeding. Forage sorghum fits that need well. We like corn silage too, but when you look at the money and water issues, we just can’t afford to depend on it. We’ve found sorghum silage to be a strong alternative that makes a lot of sense for our operation.”

Like May, many cattlemen have found that converting forage acres to sorghum silage production has many advantages. Forage sorghums can produce comparable tonnage with up to 40 percent less water than corn, have similar nutritive value and are a more flexible crop that can be planted late or double-cropped behind wheat. But what often is the deciding factor is the impact sorghum has on their bottom line.

“The biggest difference I’ve noticed in growing forage sorghum compared to corn silage is that you can grow the sorghum significantly cheaper with a lot less water,” May says. “Your input costs like seed, fertilizer and water are considerably cheaper. I’d say it’s at least 50 percent cheaper to grow and that’s one of the primary reasons we like it so much.”

The Camel of Crops
Doing more with less is a strength of sorghum in more ways than one, and it’s especially true of the crop’s reputed water-sipping efficiency. Research conducted at Texas A&M University shows sorghum will produce anywhere from 1.76 tons to 2.5 tons of forage per inch of irrigation water applied. Corn produces only 0.84 tons per inch of water applied.

“Producers in areas with limited rainfall or water supply issues should take a long hard look at incorporating forage sorghum into their cropping and feeding plans,” says Ben Beyer, Ph.D., sorghum breeder for Advanta US and the Alta Seeds brand. “The ability of sorghum to produce twice the tonnage per inch of water while increasing your profit potential with lower input costs is a strong set of advantages for growers.”

This is a key reason why sorghum is planted on more and more farmland above the Ogallala Aquifer, which stretches 170,000 square miles from South Dakota to the Texas Panhandle. Researchers examining the aquifer have calculated that water is currently being pulled from the aquifer about six times faster than it can naturally be recharged by rains and rivers. Some areas are already incapable of supporting irrigation as they once did and wells have begun to run low.

“We’re on the western side of the Ogallala and all the wells in our area have seen their production go down quite a bit, especially after the drought in recent years,” May says. “Water issues are very important for us and sorghum has helped with our water conservation efforts.”

May manages 15,000 acres of farmland for his feedlot operation and he’s been planting between 3,000 to 4,000 acres to sorghum in recent years. May says much of that is on dryland. He averaged 15 tons per acre on his forage sorghum that was planted in the month of May and 7.5 tons to 8 tons per acre on double-cropped forage sorghum following wheat that was planted in July.

Sorghum has many natural mechanisms that allow it to remain productive in spite of drought. Sorghum has waxy stems and leaves that help retain water, it will generate roots in dry conditions to enhance the plants ability to search for water and it has the ability to go dormant while waiting for rain.

“One nice thing about the forage sorghum is that you don’t necessarily need timely rains like corn,” May says. “If you don’t get the rains, it will go dormant until you do get some rain. We’ve had sorghum crops that waited for rains until mid-July and produced nice tonnage. It doesn’t cost a lot to put the sorghum out there. We consider it to be less risky than corn.

Dependable Feedstuff
Forage sorghum is an important silage crop for beef and dairy producers. Sorghums with the BMR-6 genetics have a feeding value similar to corn on a ton per ton basis. Like corn silage, sorghum silage should be harvested when moisture is between 65% and 70% moisture. This generally occurs when sorghum is in the soft dough stage. Sorghum plants that are allowed to reach maturity may suffer a reduction in usable energy.

“When we look at the nutritional performance of forage sorghum I compare it to corn silage,” May says. “From what we’ve seen it’s incredibly close to what we’d be getting from the corn, especially if you get the right hybrids selected. Our sorghum silage has proven itself to be an excellent alternative and it’s pretty darn good stuff. It just works well for us, especially given our situation with limited rainfall and water in our area.”

“We’ve slowly increased cattle numbers in our operation and as we did, we created a need for more roughage to feed the extra cows,” May says. “Forage sorghum has helped us fill the void and it’s been key in helping us increase our herd size.”

Alta Seeds - Not Your Father's Sorghums
“Sorghums have come a long way from what our fathers or grandfathers grew years ago,” says Jeff Dahlberg, director of the University of California’s Kearney Agricultural Research & Extension Center. “Those who haven’t grown sorghums in 20 years will be pleasantly surprised by the selection of hybrids and their quality. It’s to the point now that we can compete with corn silage on both quality and tonnage.”
Dahlberg has been working with sorghum in many capacities for a number of years. In the past, he’s served as research director for the National Sorghum Producers and the United Sorghum Checkoff Program. He also previously served as the USDA Agricultural Research Service curator for sorghum. Now Dahlberg is conducting forage performance trials with the latest genetics such as hybrids with the brachytic dwarf trait from Alta Seeds.

The Alta Seeds brand has been at the forefront of developing the most advanced genetics in sorghums for forage and it is set to deliver a new set of hybrids with its proprietary brachytic dwarf trait. Alta Seeds is introducing two new forage sorghum hybrids with the unique trait that offer early maturity for greater versatility. While forage sorghum hybrids with the brachytic dwarf trait have been available to growers since 2008, Alta Seeds is introducing the first early-season brachytic forages this winter. This opens up a number of options for growers including: planting in areas with shorter growing seasons, double-cropping and as a replacement crop for failed corn.

The brachytic dwarf trait reduces the distance between internodes (leaves) on a sorghum plant resulting in a short, stout plant that stands well and produces yields equal to taller plants. New AF7102 is the earliest maturing forage sorghum (85-89 days) with the multiple tillering brachytic dwarf and BMR-6 traits for excellent quality, palatability and digestibility. AF7202 is a new, medium-early (90-95 days) forage sorghum also with the brachytic dwarf and BMR-6 traits. Both hybrids are highly drought tolerant and excellent silage options.

“AF7102 and AF7202 extend the usefulness of brachytic forages to benefit farmers and ranchers in areas with short growing seasons or late plantings,” says Barry Lubbers, director of sales for Alta Seeds. “Additionally, the shorter maturities of these hybrids make them a viable option for growers interested in double-cropping or as an emergency forage for farmers looking to replant.”

Alta Seeds also is set to debut the first sudangrass hybrid with the brachytic dwarf trait to hit the market. AS9302 combines the stout stalks and excellent standability of brachytic forage with BMR-6 genetics for high nutritional quality plus the dry stalk trait for quicker dry down.

Capitalizing on the 40-year germplasm base built by the legacy seed companies of Advanta US, senior sorghum breeder Vicente Trucillo and his breeding team developed the brachytic dwarf BMR forages for commercial use in the United States and Argentina. Advanta has more than 20 breeding locations and labs around the world producing the hybrids carefully selected for the Alta Seeds product portfolio.
“Since we introduced the brachytic dwarf trait in sorghums for forage, it has become increasingly popular with growers,” says Trucillo. “Our brachytic sorghum hybrids feature leaf spacing of about an inch and a half to two inches versus every six inches on conventional forage sorghums. This results in a compact plant that produces multiple tillers and resolves the lodging issues of taller plants. Our new brachytic dwarf hybrids will feature these same attributes, packaged in a hybrid that can reach maturity faster, offering increased versatility and usefulness.”

The Alta Seeds forage hybrids offer cattlemen an alternative to corn with high-quality, nutritious forage and lower costs and water requirements. Whether irrigated or on dryland, sorghum is a versatile crop that can be worked into any cattleman’s cropping and feeding plans.

Yields and quality equal corn with up to
40 percent less water and lower costs
More drought tolerant and capable
of growth after drought
Equal in nutritive value
Less input costs
Tolerates higher temperatures —
up to 19 degrees hotter than corn
Contains more crude protein than corn
Comparable in energy for maintenance,
gain, and lactation
Interchangeable with corn in the diet of lactating cows
Versatile harvesting — excellent hay, silage,
green-chop or grazing
Can be harvested multiple times due
to the regrowth potential
Tillering ability and regrowth after cutting or
defoliation allows multiple cut hay crops and grazing
Replace corn silage with BMR forage sorghums
without losing production of lactating dairy cows
and finishing cattle

Tom May, partner/owner of 4-M Feeders in Stratton, Co., raises thousands of acres of sorghum silage for the 40,000 head of cattle in his feedlots.
P32

Tom May, partner/owner of 4-M Feeders in Stratton, Co., raises thousands of acres of sorghum silage for the 40,000 head of cattle in his feedlots.

Alta Seeds Senior Sorghum Breeder Vicente Trucillo and his team of breeders developed the brachytic dwarf trait for commercial use in the United States and Argentina.