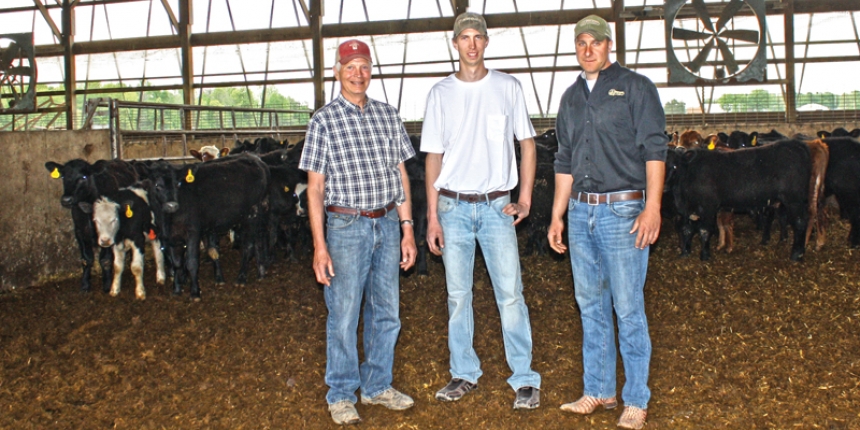 Enzyme technology is a hot topic in livestock nutrition these days, and Agri-King, Inc., based in Fulton, Ill., is leading the pack with their enzyme technology.“Agri-King uses enzyme technology to target the performance needs of multiple livestock species paired with the feedstuffs being fed to optimize feed efficiency and profitability for the global agriculture market being served,” says Dr. Dave Jones, Director of Nutrition at Agri-King.There is more nutrition in the feedstuffs we feed than livestock can extract by themselves. Given the current cost of feedstuffs and the slim margins in the livestock industry right now, everyone needs to be as efficient as possible at extracting all the possible nutrients out of the feeds we use in our livestock operations. Enzymes are one of the tools that can be used to increase the efficiency of nutrient utilization.

“When Agri-King enzyme products are fed to ruminant animals they work specifically in the rumen. Enzymes assist the rumen microbial population by performing some of the digestion for the microbes. Overall, this means improved digestion in the rumen and less work for the rumen microbial population,” says Dr. Jones. “This spares energy that would normally go to the microbes for work and now can go back to the animal for maintenance and production. The improved digestion provides the opportunity to maintain or improve ruminant performance on less dry matter intake — improved feed efficiency.”

Enzymes are specialized proteins that perform specific functions and make life as we know it possible. Enzymes catalyze reactions that result in the breakdown of organic compounds into substances that animals, and microbes, can use as nutrient sources. Enzymes are very specific in the reactions that they catalyze, like a key is specific to the lock it will unlock. There are several types of enzymes needed to digest feeds.
• Amylases are a class of enzymes that are responsible
for breaking down complex starches into simple sugars such as glucose and maltose that animals can use as an energy source.
• Cellulases break down cellulose into the simple sugar glucose by breaking the linkages between lignin and
the digestible fibers.
• Hemicellulases break down the hemi-cellulose fraction of fiber into simpler sugars. Hemi-cellulose and Cellulose are found in plant cell walls and are more prevalent in grasses, including the fodder portion of corn plants, than in legumes. Hemi-cellulose is a polysaccharide consisting of a variety of sugars (e.g. xylose, arabinose, mannose, galactose and rhamnose).
• Xylanases are responsible for breaking down complex xylans (found in plant cell walls) into the simple sugar, xylose.
• Pectinases break down pectins (high in alfalfa, beet
pulp and citrus pulp) into simple sugars. Pectins all
contain galacturonic acid and a variety of other sugars including rhamnose, galactose and xylose depending on
the pectin type.
• ß-glucanases hydrolyze the complex poly-sugar bonds of beta-glucan (found in cellulose and the bran of cereal grains) into the simple sugar glucose.
• Proteases break down complex proteins into smaller peptides and/or individual amino acids.
Many of the enzymes needed to break down feedstuffs are produced naturally by livestock. Additionally, there are other enzymes that are produced by microbes in the digestive tract of livestock, such as fiber digesting enzymes produced by microbes in the rumen of cattle, sheep and goats and in the cecum and large intestines of horses. However, there are often limitations in the amount of enzymes that are produced naturally by the animal and to the amount of digestion that occurs in the digestive tract.

The rate at which digesta passes through the digestive tract may be too fast for the native enzymes to complete the task of breaking down all of the nutrients consumed by the animal. Additionally, there may be limitations on the amount of enzymes produced by the microbes in the digestive tract due to a digestive upset in the animal reducing the microbial population. This is where Agri-King steps in — we want our livestock clients to get the most out of every bite of feed consumed by their livestock. Agri-King has developed a group of products that utilize enzyme technology to help our clients achieve the best nutrient efficiency while maintaining high levels of production. The enzyme technologies that we supplement into Agri-King products are extracted from complex microbial fermentations of fungi (mold: e.g. Aspergillus, Trichoderma) and bacteria (e.g. Bacillus). These enzymes are extracted from these natural, environmental micro-organisms and then the micro-organism itself is discarded since these typically are spoilage microorganisms.

Silo-King®-treated feedstuffs are the foundation for efficiency in ruminant animals. As a forage treatment program, Silo-King provides enzymes (cellulases, amylases, xylanases, pectinases) that start a “pre-digestion” of fibers and starches in forages, which makes them more digestible for the animals.

Maximiser® is a blend of enzymes, direct-fed microbials and nutrients designed to enhance nutrient digestibility and metabolism, designed to be fed to growing and finishing cattle after the receiving period. On-farm observations have shown improved feed conversion in growing and finishing cattle by an average of 10 percent.
The strategic utilization of enzyme supplements, can greatly increase the efficient utilization of the feedstuffs consumed by livestock and the profit potential of the producers that use them.

Enzyme Technology at Work
A recent trial on background steer calves and their commercial growth performance using Maximiser concluded the following results:
• Improved energy utilization and improved growth performance during the grower phase.
• Improved digestibility, decreased Dry Matter Intakes (DMI) and increased final body weights.
• Increased Feed Efficiency.
• This same trial showed a Return on Investment of 6.17:1.
As of this writing Agri-King has just finished a large pen heifer study. The findings show similar outcomes as the steer trial done previously. Similar trends are being observed and final statistical analysis is pending before the final results can be released. To find out the results of this study, contact your area Agri-King representative in the coming weeks.

Client Results
Tim Bensman, President of Operations at Cedar Creek Farms in West Central Ohio, was introduced to the Agri-King program through Area Manager Abe Gibbs, Anna, Ohio. “Abe called on us and told us about the cost savings and performance that he was getting on other feedlots,” says Bensman.Cedar Creek Farms run their cattle on an open floor feedlot and total confinement buildings. Most of the cattle they receive are yearling Holstein or Colored cattle that come from Virginia, Kentucky and Tennessee. They also do some back grounding work with colored cattle to get them ready for the feedlot. All of the cattle are purchased in semi load lots and are sold directly to the packing house.“Abe comes to the feedlot and looks at our cattle on a regular basis to ensure that the diet and the cattle are performing the best they can,” says Bensman.“Before working with Abe we were on a shell corn and pellet diet, now we run a TMR on all of our cattle. By doing that we are able to utilize different commodities and use home grown feedstuffs to lower our cost of production.” Currently, Cedar Creek Farms is feeding a diet that includes silage, snaplage, ryelage, corn, syrup and gluten.“Abe’s focus is on our TMR sampling and looking at the fat and IVDMD of the ration to assess the total NEG of the diet. All of Cedar Creek’s rations are balanced using Agri-King’s ration and nutrition departments. They are able to maximize their dry matter intakes to better meet the requirements of their cattle. “All of our rations consist of a custom blend mineral that Abe put together for us that includes Maximiser. We run three rations and a starter or receiving ration then either a grower or finisher ration.” Of their current diet, syrup has played a big role in the profitability of the cattle in this high market. Bensman says, “The energy and fat content it adds to the diet is very beneficial, add in the Maximiser and it enhances the breakdown, making feeding cattle very profitable.”

Gibbs runs a cost analysis along with their current kill sheet performance to help them purchase profitable cattle. “Abe’s big push to us was feeding the cattle for quality cattle. He is able to make changes to the diet as he feels it’s necessary to keep us on track with our marketing dates of out cattle,” says Bensman. Bensman says that once they implemented the Maximiser product into their feeding rations, they saw a more consistent overall performance and a .25 to .50 better gain with lower dry matter intakes after feeding the new diet for 30 days. “Abe also changed the diet to increase our yield and carcass quality.”
Other observations they have seen include the cattle bloom faster when coming into the yard. Cedar Creek cattle are 30 to 40 days sooner to market. They are seeing less undigested feed passing through into the manure and they can tell they are getting more out of their feedstuffs, as well as the lower dry matter intakes. Both, Bensman and Gibbs feel that Maximiser has given them an advantage to push the cattle in a way that they were not able to before. “My relationship with Abe and his knowledge of feeding cattle and the cattle industry has made for a profitable cattle feeding experience,” says Bensman.Running a large feedlot operation isn’t easy, especially without the help of good people. Tim runs the operations, while his father, Dave Bensman is the Vice President of Operations, his mother, Margie is the bookkeeper and secretary, and Tim’s wife, Katie is the Treasurer and secondary bookkeeper.

Who is Agri-King?
Agri-King was founded 1968, by Del Curley, who was employed as a feed salesman, but had the idea that forages and grains that were fed to livestock could be tested for nutrients, just as soil was being tested and then treated with only the necessary fertilizers. Almost 50 years later, Agri-King is still using this idea as the basis for its enzyme technology. As stated in the company’s mission statement, “[Agri-King is] dedicated to selling and serving the farming community by providing the most advanced nutritional concepts and products through the utilization of the latest technology.”
Agri-King, Inc. is headquartered in Fulton, IL, USA, and internationally known for precise feed analysis, ration formulation, and innovative nutritional products. Agri-King is a highly respected leader in working with livestock producers to optimize production, enhance feed efficiency, and maximize producer profits. For further information, contact Agri-King, Inc. at 800-435-9560 or www.agriking.com.