The Added Benefits of Hay 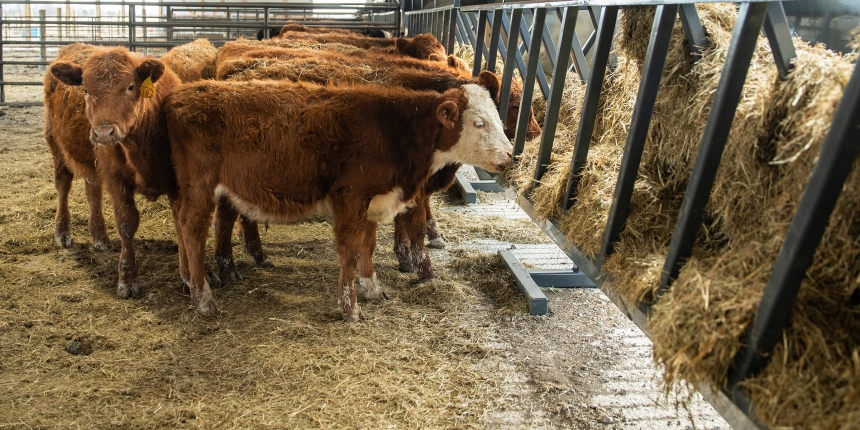 The Added Benefits of Hay.

Growing and maintaining a solid hay product to sell and feed to livestock is part art and part science – just ask the experts at Energy Curve Technology in Harrisonville, MO.

With more than 70 years of combined experience of agricultural know-how, the team at Energy Curve has been emersed in the ag technology sector since the company was founded in 2018, with an ongoing mission of cutting operating costs for farmers and making them more competitive with their hay products by using technology to apply and harvest crops at optimum nutrient loads. Boasting a team of agricultural veterans, including co-founder and president Todd Sears and co-founder and chief scientist, Ben Elliott, Energy Curve brings a key understanding of what it takes to produce feed crops that result in increased tonnage per acre and provide the nutritional benefits needed for healthy livestock.

“We’ve built cutting-edge technology around feeding plants at the right time – we feed the plant based upon what it needs at that time, in that growth stage – that’s what Energy Curve is all about,” Sears says. “We have a platform that notifies the farmer when to spray, at what growth stage the plant is at, and we tell it what application to apply it to.”

As Elliott further explains, Energy Curve’s products are developed from a deeply scientific origin, further based on the operational understanding the team has on the ground.

“We find ways to take advantage of the small but powerful aspects of the energy requirement plants and animals have on a daily basis, and within the environment they grow to express the best possible performance in the field,” Elliott says.

A common analogy that Sears uses to describe Energy Curve’s product impact is similar to caring for a young baby. “When you bring a baby home, you put all the appropriate food in front of the baby at different states and expect it to live. With Energy Curve, we actually know the growth stages and we feed the plant based upon its specific needs at that time in that growth stage.

So out of that, we’ve developed a hay system where we can do the same thing with pastures, with hay programs, and feed the hay programs and the grass at the same time.”

Energy Curve started with a test plot at the airport in Harrisonville, Missouri and began with about 60% weed pressure. Over five years they cut that weed pressure down 6%, using no herbicides.

“We’re practical farmers. We do it every day and we have a feedlot. When working with farmers we’re always looking to see what does that farmer already have. We don’t ask them to go out and spend money on more equipment. We ask them,‘What do you have? What are you doing? How will our system help you do better?,’” Sears says. “Our program, on an 80 to 90% average, is going to be everything that every farmer would need to grow hay. If 10% of farmers have an unusual soil type, then they will be the ones that we might have to do a little extra for them to see the benefits.”

Although some people mistakenly believe Energy Curve is deals specifically with specialty crops such as alfalfa or mono crops, they do not. Rather, Energy Curve always try to meet a farmer right where they are at.

“Whatever he’s doing, whatever crop he’s got, we don’t ask him to change,” Sear says. “I have spent my career putting the power back in the producer’s hands.”

“There is not a product that we develop that doesn’t play a part of our farming operation,” Sears says. They also provide a very unique set of insights in data analytics that growers generally do not have access to unless they are working with Energy Curve.

“On my hay fields in Missouri, we start with a very heavy fescue. We’ll have some red clover in there and maybe some white clover, maybe a little bit of orchard grass blended in and then we’ll always have a weed pressure just in normal hayfields,” Sears says. “Using our hay program, we go in and we feed the healthy plants to help push away and drive out the weed pressure.

We don’t use herbicides. We just use natural components.”

“So, all of that is formulated to feed the plants at different growth stages at the same time,” Sears says. Energy Curve also works with producers of all sizes – including those who may have hay fields that are 20 acres all the way up to a 700- or 800-acre hay field.

As Elliott explains, the company’s Benefit Hay program is designed to start at the heart of the cattle’s food by growing a more nutrient dense hay that is more palatable and easier to process in the gut.

“Benefit Hay is also designed to ensure the condition of hay that is stored is left in a better state for long-term nutrient availability,” Elliott says.

To accomplish this, Energy Curve combines the pre- and probiotics into a system that is not disruptive to the rumen, and increases digestive efficiency for better performance and high-quality output to consumers.

“Ultimately, this leads to a hay program that can perform with other finishing systems for a much lower cost,” Elliott says.

Working in conjunction with the Benefit Hay program, Energy Curve also offers a series of other Benefit products – from Benefit Backgrounding and Benefit Fattening products that help accelerated the biological activity within the biomass of each bale, resulting in weigh-gain for young calves, to Benefit Compost Primer that helps increase the breakdown of compost, resulting in a natural and safe fertilizer.

“In establishing Energy Curve, I have consulted with our scientists about how do we take this dominant fescue – that in the cattle industry has a negative connotation when you go to sell cattle – and make that hay better,” Sears says. “So, we created our extender, called Benefit Backgrounding, to provide more of a protein-based application that is sprayed right before hay is baled. Looking at relative feed values, using our extender, these values are raised considerably.”

In addition, Energy Curve has developed an indoor feed facility where they take calves from 500 pounds to 1,350 pounds using the company’s hay products. They also offer formulated cattle tubs that are designed to work in concert with these hay products. One tub is formulated for the protein side and other is for finishing.

“There are always changes in the mineral load that cattle get when on a natural finishing program where ever they are,” Elliott says. “With the tubs we supplement protein and minerals to round out the whole approach. The tubs are adaptable to any operation no matter what the feed source.”

All told, Energy Curve’s Benefit Hay product line has proven to a success for farming producers of all sizes, with different hay situations.