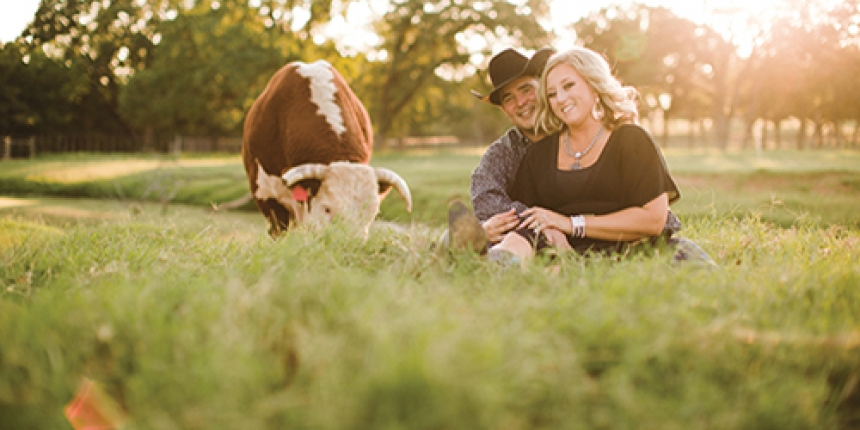 While Aces Wild Ranch is a relatively new venture in the cattle business, owners, Jed Watje and Katie Johnson are no newcomers to the cattle industry.Born with it in our blood, Jed’s great-great grandfather was the President of the American Shorthorn Association in 1918 and one of the first importers of Shorthorn cattle into the United States. He exhibited the Champion Shorthorn bull at the 1918 Chicago International Stock Show. My maternal great-grandfather was a cattle trader and built the old Cumming Livestock Auction, which at one time was one of the highest grossing livestock commissions in Georgia, and my paternal great-grandfather was a rancher from Crawford, Texas. Both Jed and I have been involved in the cattle industry our entire lives and are excited to have the opportunity to focus on growing our cattle business together as our wedding approaches June 14th.

Jed grew up in the purebred Charolais business at his family’s farm in Willmar, Minnesota. His family hosts their annual Charolais bull sale each March in Faith, South Dakota. We are still actively involved and partners in his family’s Charolais herd in Minnesota. I grew up showing Hereford cattle and raising club calves in Canton, Georgia where I started my own herd of Hereford cattle at a young age that now reside in Texas with us. Some of our Charolais and Hereford cows descend from several generations of our family’s breeding, beginning with show heifers for us as youngsters. At a young age we were taught the importance of genetics and striving to raise high caliber cattle.

Although as children all we ever wanted to do was raise cattle, we didn’t stem from families with large amounts of land or livestock so we knew we would have to do something else to get to a point where we could raise cattle full time. Jed attended the University of Minnesota and eventually purchased a feed mill that he successfully grew into Watje Feed Service. Watje Feed Service feeds around 600,000 pigs annually and offers a full line of feed for all livestock species. I graduated from Oklahoma State University with a degree in Agribusiness and started Advantage Livestock Marketing, which is a full service livestock marketing agency specializing in sale photography and videography.

As fate would have it we meet through marketing bulls together and soon Aces Wild Ranch was born. Our main focus is on raising high quality Charolais, Hereford, and SimAngus cattle with a goal of starting another bull sale here in Texas and our first production sale in the Fall of 2014. We also raise a few club calves and enjoy helping kids with their projects.

Our Charolais genetics are heavily influenced by the BCI Ms Very Limit 6033 cow, as we have many genetics out of her daughters Thomas Ms Impressive 0641 and Thomas Ms Trademark 4753 PET. We are also very excited to use a lot of the M6 Ms E46’s Duke 248 PET cow’s genetics in our spring embryo program this year. Our herd sire line-up for the Charolais division includes Turton, the 2011 National Champion bull, Diablo, the 2012 National Western Champion Bull, El Padrino, the 2013 National Western Bull Calf Champion, and the highly popular Game On bull. While these bulls have succeed in the show ring and Turton and Diablo sired sale topping show heifers in their first calf crops at $41,000 and $27,500 respectively, they still have a lot to offer to the commercial producer in terms of EPDs, growth, performance, and muscle. Our Hereford herd stems from the maternal Victor bloodlines combined with the modern bulls with outstanding performance and muscle, such as Golden Oak Outcross 18U and C New Era ET. We also have a herd of commercial purebred Angus cows that excel in fertility, milk, and performance and we are mating those cows with purebred Simmental bulls such as Ruby’s Wide Open 909W, Mr NLC Upgrade U8676, and Mr HOC Broker to produce outstanding half-blood Simmental cattle. With these genetics we believe we can raise top performing commercial bulls and replacement females while still being able to sell top end show heifers.

We strive to raise cattle that are functional with great performance and eye appeal. We use proven genetics with above average EPD’s and performance data, but we don’t breed off of paper alone either. If an animal is not phenotypically desirable it is culled. Our goal is to raise bulls and replacement females with the performance to improve the commercial cattlemen’s herd, but our top end animals need to be able to excel in the show ring as well. As we build our herd we rely on the use of new tools such as social media and internet sales and the tried and true tools of print advertising and show displays in order to optimize our marketing efforts at a cost effective rates.

We are working on building our embryo transfer program as well. This spring we hope to put in almost 100 purebred Charolais embryos with the goal of retaining several full sib females to increase the uniformity of our herd and the bull calves will go in our bull sale. We have invested in what we believe are the top genetics in the Charolais and Hereford breeds. We are selecting for females with growth and performance that still have muscle and balance.

As we grow Aces Wild we plan to implement our resources, knowledge, and experiences from our other businesses as tools to help our customers succeed and market their cattle. We have been researching feedlot and feed options for our genetics and the feeder cattle that result from them. We also hope with the use of embryo transfer we can provide our customer with full sib herd sires to increase uniformity in their calf crops. For our customers who are producing seedstock we aid with marketing by offering photography and consulting services.

Aces Wild Ranch offers cattle, semen, and embryos for sale at all times at the ranch in Weatherford.  We invite anyone interested in our genetics to stop by or give us a call.