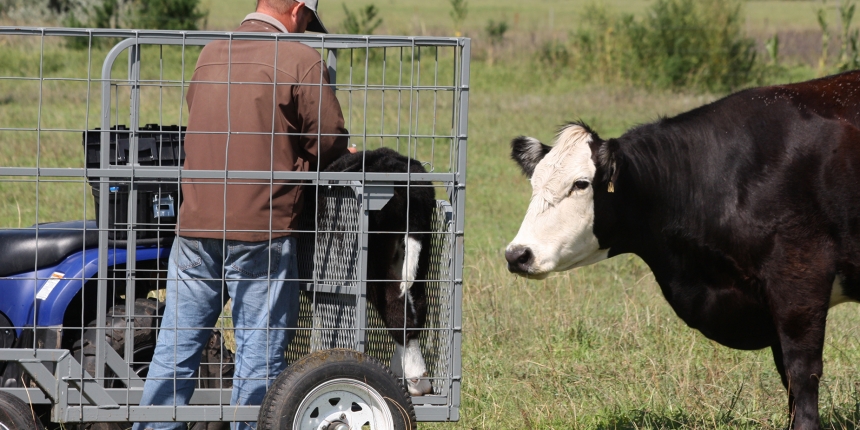 Recent census data has reported the average age of the American rancher today is over 55. Cattle ranching is physically demanding, and every year of age makes meeting those physical demands more challenging. The Leo family in Nebraska has a true passion for the industry and has found a way to help producers remain on the ranch for as long as possible. “I’ve been in the cattle business all my life, and I’m 70 years old now,” Dan Leo said. “I know the trials and tribulations along with the risks, safety concerns, and labor issues that are out there.”

When the Leo family began using this device on their family-run ranch, they knew they had something worth sharing with the whole industry. “I just knew that this Catcher would make it easier for everybody involved and that it could help producers safely enjoy one of their favorite times of the year,” Leo said. As an older generation rancher himself, Leo understands not only the desire to remain in the business but also the challenges that come with it.  “So from that basis, we took the idea and started manufacturing and marketing. The demand was initially more than what we were prepared for as we could only build Catchers so fast.  “We have a passion for helping people stay in the business and do what they like to do without getting hurt, I’ve even got people in their eighties and nineties that are using them. Quite honestly, a lot of people in the cattle industry today don’t have any plans to retire, they don’t know how to retire, or they don’t want to retire. The longer they can stay in the business without getting hurt and without having their family worrying about them, the better they like it. That’s where the Calf Catchers have a huge value.” Leo says.

Innovative solution…
Leo’s Safety Zone Calf Catcher, a well-designed and ranch-proven device, enables one person to safely process new calves without threat from the instinctive mother cow. It is a durably built steel cage that quickly mounts to and dismounts from either an ATV or a UTV.  The variety of terrain the Calf Catchers are now servicing is true testament to their build and usability. Their durable construction, attachment configurations for both ATVs and UTVs, and additional options that include a digital scale or tow hitch make them a good fit for almost any unique operation. “They’re built really rugged,” Leo said. “One of our customers is actually a retired mechanical engineer, and he told me, ‘With how well you build these units, my kid’s grandkids will be using them years from now,’ and that’s the truth of it. The units are built tough, and they’re built to go over rough country. We’re still using our original unit today. There’s very little maintenance on them.”Most importantly, the catcher makes the whole process easier on the operator, the calf, and the cow. Typically used on newborn to week-old youngsters, but calves up to 300 lbs. can be caught for treatment of pinkeye, foot rot and pneumonia conditions. 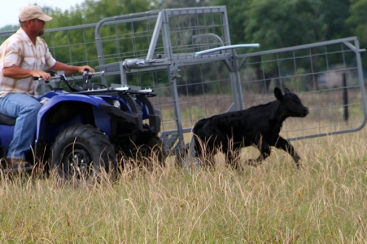 Ease of Operation…
The operator captures the calf in the cage by driving up to the desired calf, maneuvering the cage until the calf is in the proper position, and then shutting the spring-loaded gate. Aiding the process, the catcher is designed for quiet operation, thus does not threaten the cowherd. Then the operator steps into the cage through the adjacent side entry door. The calf is moved to the rear holding compartment to tag, vaccinate, band, or even weigh the calf, which work is performed by the operator in the safety of the cage with the protective mother cow nearby. “Nearly all the cows will remain at the rear of the cage where they can see and smell their calf, which adds to their comfort level,” Leo explained. “The action video on our SafetyZoneCalfCatchers.com website demonstrates how the unit functions in the calving pasture.  Also found there are many customer testimonials we’ve received who share their personal comments” Leo added.

Successful everywhere…
The devices have been sold to commercial and seedstock ranchers as well as to large commercial feedlot calving programs, and they are proving to be successful in every venue. As the industry transitions to the use of ATVs and UTVs more frequently, operations are already set up to use the Calf Catcher. “Most everybody in the industry today has either an ATV or UTV in their operation already,” Leo said. “So, with a pretty low-cost investment, they are set up to continue in their operation about as long as they want to be involved.” That’s the Leo family’s main goal with the business.  What they didn’t know was how fast this business would take off and the extent that it would grow. Now we sell both direct, and through a dealer network in the US and primarily through distributors servicing several foreign countries.” 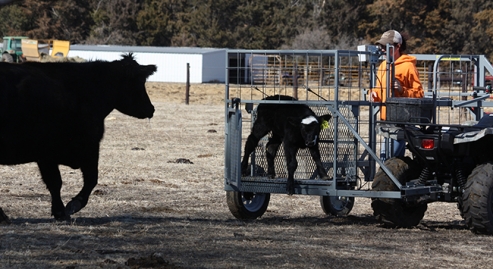 Safety Zone Calf Catchers LLC, internationally trademarked and registered, sells directly to cattlemen and through a growing dealer network. Calf Catchers can now be found in every state in the U.S. and every province in Canada, as well as Australia, multiple European countries, and both Central and South America. “Australia was our first international market beyond Canada. People there discovered us through our website and Facebook promotions,” Leo explained. “Two years ago, I personally introduced the Calf Catchers at a large farm show called AgQuip in New South Wales, Australia. We had amazing interest, so we secured an Australian distributor, and the rest has been history. We now ship containers across the ocean with fifty-plus Catchers in each.”